Though its origins date back to the 5th century, the present church was built in 1587, with the surrounding buildings added during the 1600s. The most important building – the church, called the Katholikon - dates from the 16th century, has a striking façade and is marked by the influence of Renaissance. It is a typically Eastern Orthodox church with many icons on the walls and votive candles flickering. The church is a basilica with two naves, dedicated to the Transfiguration of Christ and to Saint Constantine and Helen. The forefront is a work of the Italian architects Sebastiano Serlio and Andrea Palladio. The impressive church has become one of the most recognizable symbols of Crete and you can see photos of it, on most tourist guides of the island.

The monastery has long been an integral part of Crete’s history and fights for freedom. By the end of 1648, most of Crete was under Ottoman control. During the Cretan revolt of 1866, 943 Greeks mostly women and children sought refuge in the monastery. After three days of fights, the Turks broke through the gates. Upon the request to surrender, the abbot set fire to a large store of gunpowder, choosing to sacrifice himself and the other people inside, and take hundreds of Ottoman soldiers to the grave. The angry Turks slaughtered most of the survivors. The Holocaust of Arkadi Monastery was a tragic symbol of the Cretan struggle for independence. After years of struggle, the Ottomans were finally expelled in 1898 and the island was declared independent. The union of Crete with Greece took place in 1913.

The monastery is fortified and in addition to the Venetian-style church, its walls enclose cloisters, monks’ cells, a well-kept garden and a small museum. In the building encircling the courtyard are many other rooms to explore. You can visit a monks’ room, traditionally and sparsely made up as if a monk was still living there, and the powder magazine an old wine cellar where the Holocaust took place on November 9th, 1866. You can also climb stairs to the first floor for beautiful views of the church and the entrance from above. The small museum is housed in a building to the right of the church and hosts interesting exhibits related to Crete’s fight for independence as well as a series of historical relics, including some precious centuries-old Gospels, Bibles and icons. It is also the best place to learn more about the island’s recent history and the monastery itself. Outside the walls is the ossuary, a small building with dozens of skulls and other bones bear the marks of the battle made by the Turks. There is a parking area, a small café that serves refreshments through the day and a gift shop where you can find local honey, raki and handicrafts.

Arkadi Monastery stands proudly at the end of a steep, twisting road, about 20 minutes by car from the town of Rethymnon. It is located to the south of the main Crete highway which runs from Heraklion to Rethymno and Chania. The most convenient place to turn off is Stavromenos, on the approach to Rethymno, passing through some small Cretan villages en route. A visit to Arkadi Monastery, is a unique experience that should not miss on your Crete trip. You can also get to Arkadi Monastery by bus from Rethymno. Buses depart from Rethymno’s Public Bus Station, 2-3 times a day and the trip lasts about 40 minutes. Check the KTEL Buses website for up-to-date departure and return times. The historic monastery can also be reached on tours from many Crete resorts along the coast.

Arkadi is within easy reach of some of the best beaches in Crete like Spilies and Geropotamos. If you drive south towards the coastline, you will have options including Agia Galini, Plakias, Kalypso beach and Preveli all nearby.

There is a small fee for non-Greek visitors, free for local citizens. 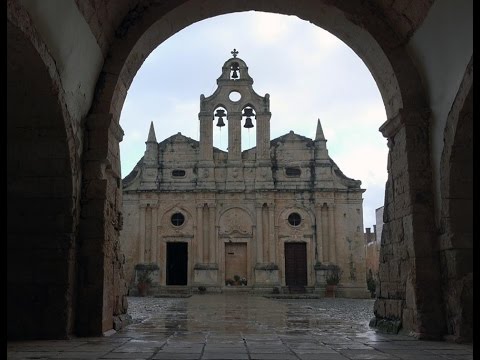