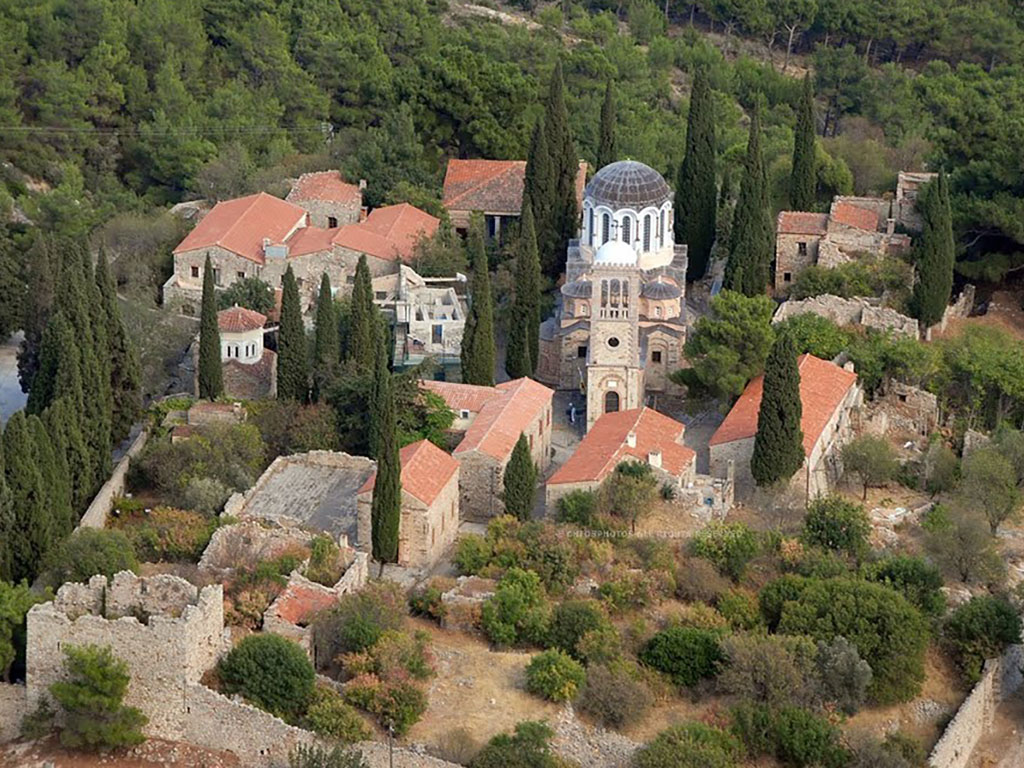 The New Monastery, located in the wider area of ​​Karyes, west of the city of Chios, in a valley of the southern Provatio Mountains or Provatas, the rocky slopes of which close the view except for a small opening, while the view ascends from city ​​is wonderful. It is a monument of medieval times and it is known worldwide for its excellent mosaic art. In 1990 it was declared a UNESCO World Heritage Site.
It was founded in the middle of the 11th century with the sponsorship of the emperor Constantine IX Gladiator, his wife, Zoe, and her sister Theodora. The foundation of the monastery is connected with a monastic tradition, according to which in the place where the Catholicos was built, three miraculous icons of the Virgin Mary were found by three Chian ascetics, hanging in a myrsin branch.
During the nearly 1000 years of its existence, the monastery has been tested many times by disasters. The worst of all happened in the 19th century, first in 1822 with the burning and looting of the monastery by the Ottomans and then in 1881, when a strong earthquake destroyed buildings of the complex.
The monastery complex follows the standard layout of the buildings in the monasteries of the Byzantine times. Specifically, in the middle, the Catholicon stands free from all sides, that is, the main church of the monastery, while in a short distance from it we find the Bank, the common dining area of ​​the monks in the coenobitic system. The rest of the space is occupied by other shared buildings and mainly by cell wings.
The Catholicon, the most important building of each monastery, is dedicated to the Virgin Mary and celebrated on August 23, while bearing a mosaic decoration of the 11th century of excellent artistic quality and idiosyncratic aesthetic expression. To the northwest of the Catholicon is the water tank, while to the southwest of the Catholicon, a short distance away, is the bank
Outside the precinct is the cemetery of the monastery with the church of Agios Loukas. At the western end of the monastery rises a tower, which protected the monastery complex.
In the museum space of the monastery are kept ecclesiastical and folk embroidery, works of silversmithing, post-Byzantine icons, and textile works. 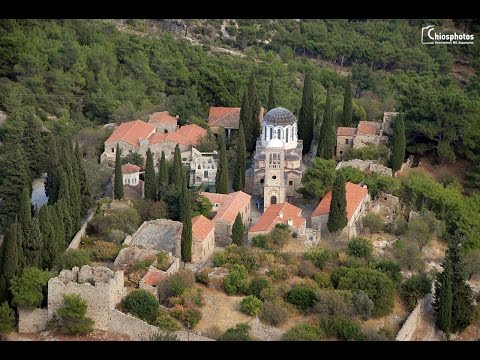