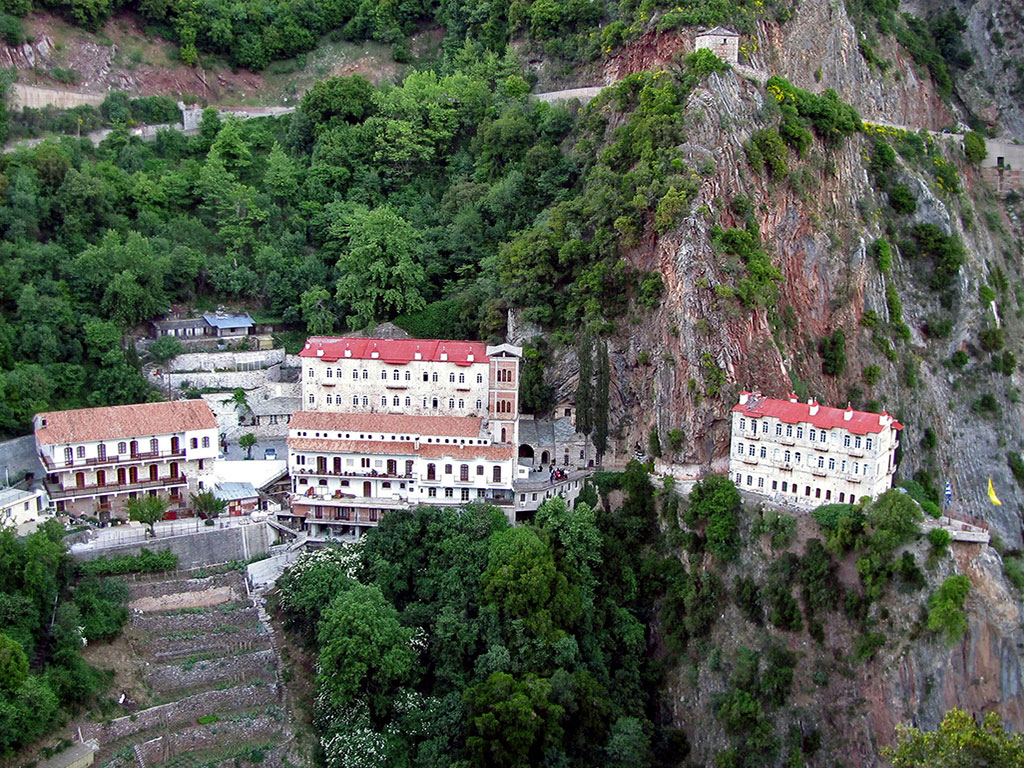 The monastery of Panagia Prousiotissa (the Virgin Mary of Prousós), also known as ‘the House of Panagia’, is built on a steep rock among mountains in Evrytania, Central Greece. It is dedicated to the Dormition of the Virgin and is one of the most important religious locations in Greece, attracting many faithful each year who come here to venerate the famous and miraculous icon of the Virgin Mary. According to tradition, the icon was painted by St. Luke the Evangelist in Prousa (Bursa, Asia Minor) during the reign of the iconoclast emperor Theophilus but it was taken away from there so as to be saved from the burning of the icons the emperor had ordered. The icon was brought to Greece by a young man of noble origin, called Dionysios, but for an unknown reason the icon was lost when Dionysios arrived in Thrace. This holy site dates back to 829AD and is linked to the adventures and the appearance of the holy icon in a cave of this area. The monastery was founded at the exact place which the Virgin Mary chose in a miraculous way. The miraculous icon of Panagia Proutiotissa is now kept in a carved cave church, the first church of the Monastery.

Throughout its long history, the monastery suffered several disasters the most recent of which was the fire, set by the Germans in 1944 which led to the complete destruction of the building. Several parts of the icon were also destroyed during the Turkish occupation. During that period, the monastery offered shelter to the local population and was the place where the Greek commander-in-chief Georgios Karaiskakis received treatment, when he was sick. The monastery has been rebuilt several times with its position, between two mountains, to offer spectacular views of the tree-filled gorge.

On the path that leads to the monastery there are the “Footsteps of the Virgin”. Some geologic formations that look like footprints, which according to tradition are the steps of the Virgin Mary on her way from Proussa. The monastery consists of the Catholikon and some cells. The Catholikon is a cross-shaped temple with a dome. It dates back to 1754 and is decorated with murals. A remarkable museum that holds several historical and religious artifacts including manuscripts, printed books, ecclesiastical icons dating back to the 13th and 16th century, swords and many more objects, is also housed there. Outside the monastery, there are two castles, one to the left and one to the right, which are called Towers of Karaiskakis. There is also the church of Agioi Pantes, built in 1754.

The Holy Monastery is located 35km away from Karpenisi, near the village of Proussos and can be easily reached by car. It is open to the public certain hours every day. In order to enter you should be dressed appropriate. If you wish to stay overnight, the monastery offers accommodation. 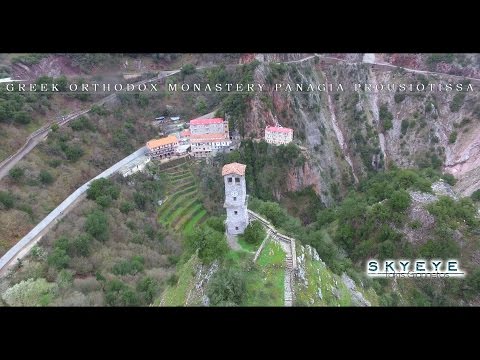