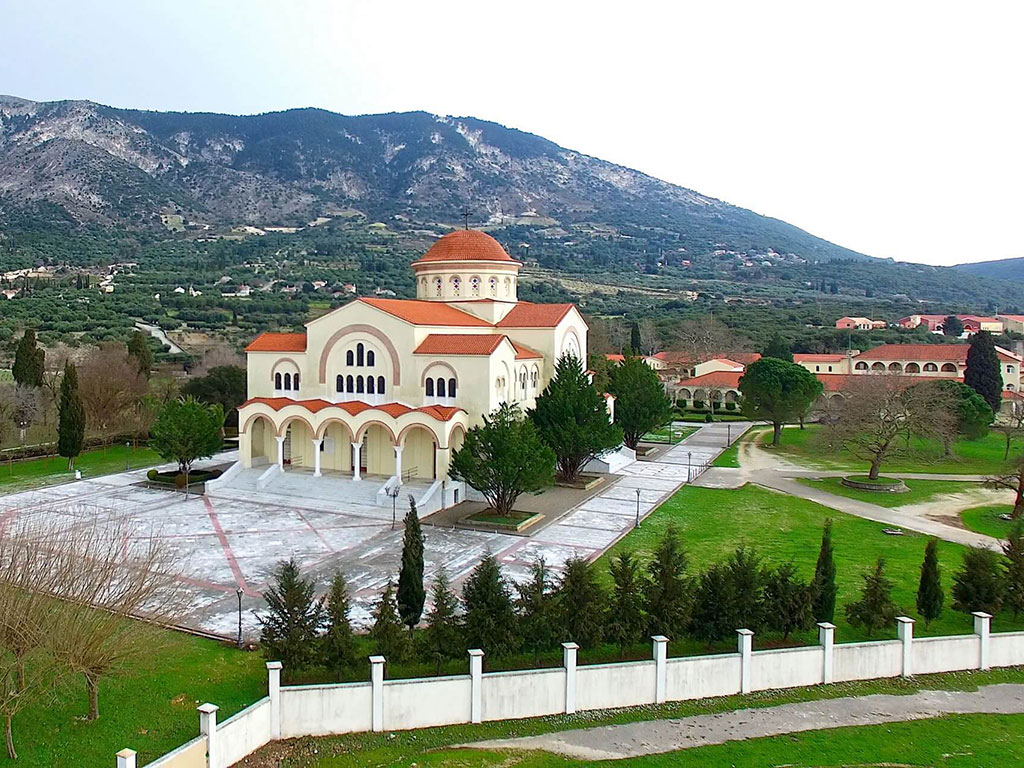 Agios Gerasimos Monastery is located on the plateau of Omala and it is the largest religious monument in Kefalonia having been established in 1560 by Saint Gerasimos , the patron saint of the island.
The proclamation of the holiness of Saint Gerasimos took place in 1622. Saint Gerasimos was named young hermit to distinguish him from Saint Gerasimos the Jordanian . The Orthodox Church commemorates the Saint in two dates, on October 20th and August 16th. In both cases, a great feast with believers from across the country takes place at the monastery. For Kefalonia Saint Gerasimos is just the “Saint” and that’s why it is the most common name on the island.
The Monastery of Saint Gerasimos is easily accessed from Argostoli and Sami. The relics of the saint are dressed in the vestments of the burial and is placed inside a silver reliquary, over his grave . You can also visit the place where he lived as an hermit as its entrance is inside the church: it is a very narrow passage that leads through a nearly vertical iron ladder with length of three meters in a basement space which is divided by a narrow hole in two rooms. On the premises of the monastery three large trees that the Saint planted himself are still standing as well as the three wells that he opened with his hands according to tradition.
The Life of Agios Gerasimos
The Saint of Kefalonia was born in Trikala of Corinthos in 1506 and studied at Zakynthos, the most important educational centers of that time. Having traveled to many holy places of Greece, he visited Istanbul and ended up in Mount Athos, where he became a monk. Then he left for Jerusalem, where he remained for more than ten years, he was ordained Archimandrite Gerasimos in honor of Saint Gerasimos the Jordanian and served in the Church of the Resurrection. He toured in many countries of the Middle East and in 1548 he left Jerusalem for Cret . From there two years later he returned to Zakynthos and became hermit in a cave on Agios Nicolas Gerakarios.
His decision to visit Kefalonia dates back in about 1555. Initially he was also an hermit in a cave in the area of Lassi, for more than five years. The 1560 is the year that he decided to stay on the plateau of Omala, at the foothills of Enos. He also founded a new convent named New Jerusalem in the ruined chapel of the Assumption. Immediately all the local believers run to hear his preaching, and gradually his fame is spread throughout the Christian world.
On the day of August 15th in 1579, the tradition says that Saint of Kefalonia reposed. His body was buried next to the church of the monastery. The first time he was disintered two years later, the Venetian authorities were unconvinced for his incorruptibility and that’s why the procedure was repeated one year later: the result was the same and since then the relics of the saint kept in a silver reliquary in the convent.