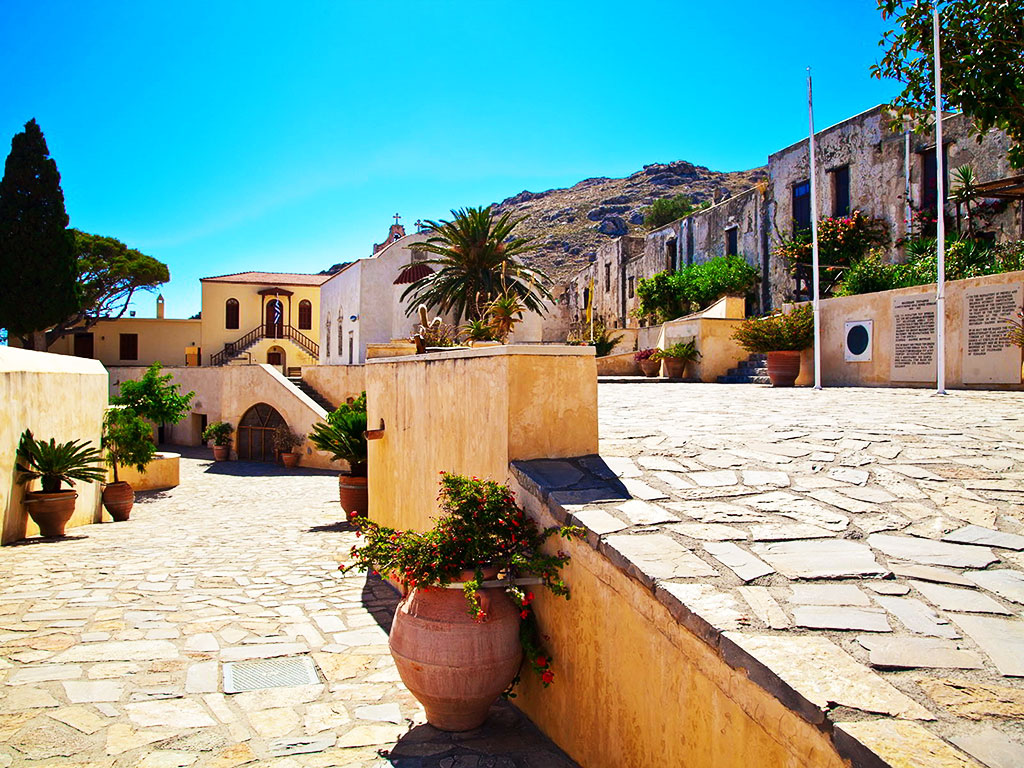 The Holy Stavropegiac and Patriarchal Preveli Monastery of Saint John the Theologian (Evangelist), known as the Monastery of Preveli is located at the south of Prefecture of Rethymnon and it is the most sacred part of the Holy Diocese of Lambis and Sfakion, in whose the spiritual jurisdiction belongs. The monastery is consisted of two main building complexes, the Lower (Kato) Monastery of Saint John the Baptist and the Rear (Pisso) Monastery of Saint John the Theologian which is in operation today.
The Preveli Monastery and its dependencies cover a large estate land of the Phoenix Municipality towards the Libyan sea and along the Great River (Megalos Potamos), which ends at this point. There are strong indications that the first core of the Monastery was organized on the area of the Monastery of Saint John the Baptist or Kato Monastiri (the lower monastery), during the II Byzantine period of Crete, around the 10th or the beginning of the 11th century, when many monasteries were established on the south coast of Crete. The oldest date related to the monastery is 1594, and it is engraved on a bell of the monastery. The monastery was probably founded during the Venetian occupation by a feudal lord known as Prevelis. When in 1649 the Turks occupied Crete, they destroyed numerous church establishments, among them the monastery of Preveli. The Monastery has a glorious history due to the active and leading involvement of its fellow monks in all national endeavourers for freedom and education of our people. Thus, it merits specific recognition and respect throughout the island of Crete.
Kato Monastery
The first monastery complex, which the visitor first meets, coming from Rethymnon, is the Kato Monastery of Agios Ioannis Prodomos (St. John the Baptist), which is ruined. It is located near Megalos Potamos river and the arched bridge of the area. It is a irregular set of buildings with a central courtyard, in the center of which you can see the church of St. John the Baptist. The church is surrounded by the buildings that housed the dining room, the cooking room, the abbot room, the cells, an olive oil press, warehouses, etc. The monastery was formerly used all year round, as the surrounding areas were ideal for cultivation and farming. However, it was later abandoned, as it was destroyed and looted several times by the various conquerors of Crete.
Piso Monastery
Unlike Kato Monastery, the Piso Monastery of Theologos operates as a male monastery and is actually the monastery of Preveli. It is built on the rocky cliffs of Mesokorfi mount, at an altitude of 170m, and has incredible sea views. The complex is built in shape Π, with the two-aisled church of the monastery in its center. The temple has a magnificent icon screen and its two aisles are dedicated to St. John the Theologian (celebr. May 8) and the Annunciation. Around the church there are the buildings of the abbot, the dining room, the baking room, the library, creamery, wax workshop, the monks' cells, the cemetery, etc.
Many of the valuable objects (sacred vessels, vestments, gospels) and icons are exhibited in a small museum, inside the monastery. A large number of icons (16th-20th century) have been collected from Kato Monastery, Piso Monastery and various chapels owned by Preveli. The exact date of the monastery founding is unknown, but there are indications that there was a small monastery in the 10th century monastery. According to tradition the monastery takes its name after a murderer coming from Preveliana village, who left his home and was installed here on 16th century. However, it is likely that the monastery takes its name from Akakios Prevelis, who renovated the monastery in 1670.
Preveli has linked its name with the participation of its monks in each of the liberation struggles of Cretans. One of the greatest personalities of Crete was the abbot of the monastery, Melchizedek Tsouderos (1803-1823). Melchizedek was a member of the Society of Friends (a secret organization. Its purpose was to overthrow Ottoman rule over Greece) and first organized the revolution of 1821 in Crete. He took part in several battles, but he was killed heroically in 1823. During the German occupation (1940s), the monastery hosted more than 5000 allies who fought in the Battle of Crete. Indeed, near Perth of Australia, there is a tourist village and a monastery named Prevelly, founded by, the survivor and forever grateful to Preveli monks, veteran soldier, Geoffrey Edwards.
The Museum
A substantial number of icons is kept in the Monastery of Preveli. The icons compose interesting teams, covering a period from the first half of the 17th to the end of 19th century approximately, an era that the good tradition of Crete has been interrupted by the Turkish conquest. The most important exhibits of the Museum are:

This miraculous relic constitutes the "Palladium" of the Monastery and is associated with many miracles especially related with eye diseases. It's a big silver cross (Dim. 0.56x0.25) with wider points at the ends and protruded decorative buttons and anthemia in a wire working process.

The Cross was carried in the front line in every battle thus greatly encouraging the fighters. In 1823, in the unequal battle against the Turks at Amourgeles, in Monofatsiou province, the Holy Symbol was lost. The Cross was found at the end of 1823 in the hands of Genoese sailors, who had purchased it in Heraklion. According to the legend, they returned the Cross to the Monastery when their ship simply stop in the water, in a a quite mysterious way, while sailing in the Libyan sea near the Monastery of Preveli and was able to proceed only after the precious relic was given back. In 1941, German officers removed the Cross from the Monastery and attempted to send it in Germany. The airplane though which would transfer the Holy Symbol away could not take off. They put the Cross in another airplane without result, nor the second airplane could start. They attributed this event to the Holy Symbol, so few days after the looting, the Cross was back at its position. It was September 13, eve of the Holy Cross exaltation, the celebrating day of the Monastery.