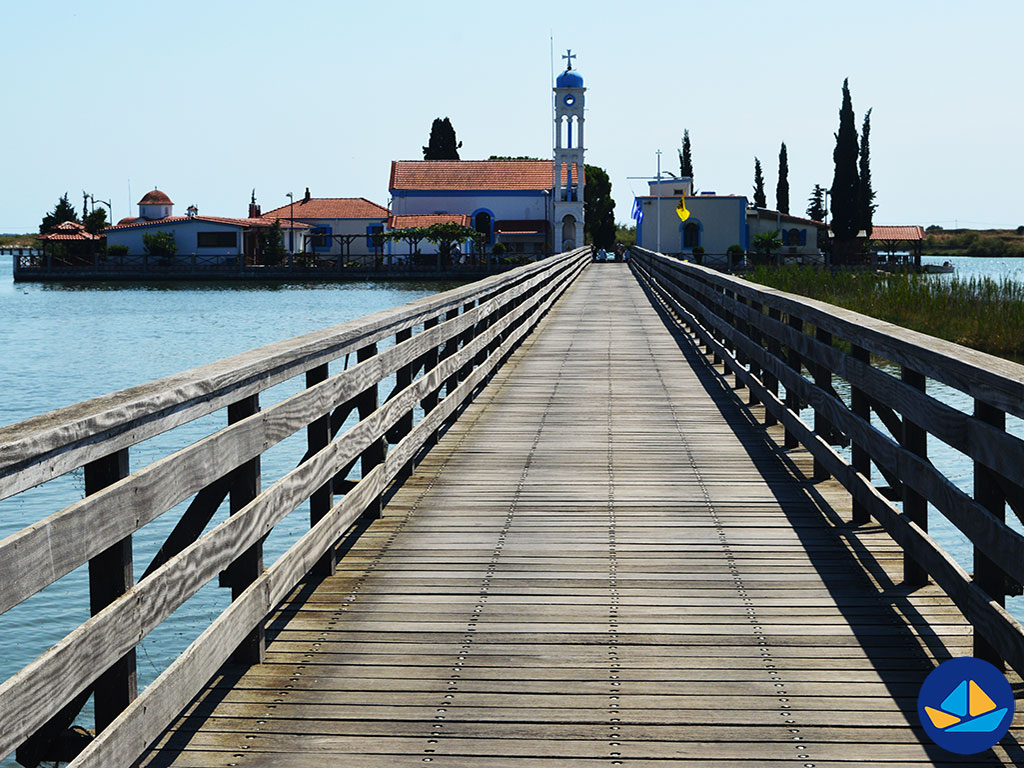 The monastery of Saint Nicholas (Agios Nikolaos) in Porto Lagos is a small monastery, which is part of the Holy and Great Monastery of Vatopedi on Mount Athos. It is built on two tiny islets in the lagoon of Porto Lagos in Xanthi, where mainland Greece and Lake Vistonis (Vistonida) meet the Thracian Sea.

In one of the islets stands the church of Agios Nikolaos and in the second one the chapel of Panagia Pantanassa, with a copy of the miraculous icon that is kept in Vatopedi. Many patients and their families come to worship and ask for healing. It is believed that the miraculous icon heals many diseases, especially cancer. The monks are remembered a lot of stories who were told by pilgrims who received help from the Mother of God Pantanassa, after the pilgrimage that took place here.

There is a wooden pedestrian bridge that connects the islets with one another and both of them with the mainland, making this place easily accessible while still keeping its air of being completely out of the ordinary world.

According to the tradition and testimonies the Monastery of St. Nicholas was inaugurated by the patriarch Nectarios in the presence of the Byzantine emperor Arkadios, who donated the area to the Vatopedi monastery, dedicating to the Mother of God Pantanassa, who saved him when his boat was sank on his return from Rome. According to another legend in the area of Porto Lagos which during the Ottoman rule belonged to a Bey, lived a monk, practising ascetism. When the bey's daughter was ill, the monk cured her. As a token of gratitude, the Bey donated this area to the Vatopedi monastery on Athos.

The whole surrounding landscape is fascinating, since dozens of bird species flutter over visitors’ heads and dive spectacularly into the clear, shallow waters of the lake in search of fish. The monastery has great religious and historical value and is a true treasure for the region. Today operates as a pilgrim center, attracting pilgrims and visitors from different countries.