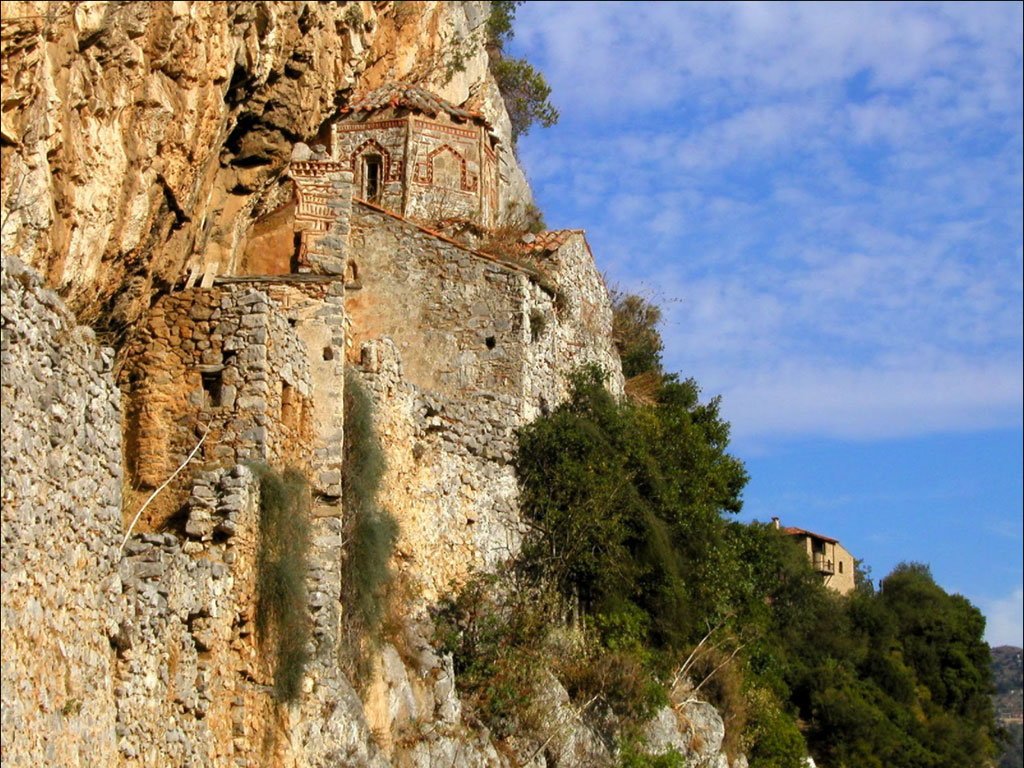 The old Monastery of Filosofou is located on the west side of the gorge of Lousios south of Dimitsana, in the Prefecture of Arcadia. At a short distance from it is the new Monastery of Filosofou. The monastery is dedicated to the Dormition of the Virgin and its feast day is on the 23rd of August.
It is made up of two groups of buildings: the old monastery, which according to folk tradition also bears the name “Krifo Scholio” (“Secret School”), and the new. Both of them are located on the right shore of the Lousious and are about 400m apart and are connected by a small path.
The old Filosofou Monastery is the most historic and the oldest monastery in Arcadia, and represents one of the most ancient Byzantine monuments that exists in Greece. It was founded in 963 during the reign of Nikephoros Fokas by Ioannis Lambardopoulos of Dimitsana, the eponymous “philosopher”, who served as secretary (“Protokritis”) of the emperor. The monastery took its name from his nickname.
The original monastery was founded in the 10th century, but took its final form gradually over the next centuries with various modifications and additions. The fortification wall was such an addition after the Fall of Constantinople, i.e. it was a construction of the late 15th century. The only surviving building of 10th century Byzantine craftsmanship is a small chapel, with notable frescoes.  It is a cross-in-square church with an octagonal dome. From the rest of the monastery only ruins of cells and other dwellings are preserved, along with a cistern and, of course, the meta-byzantine fortification wall which is the prevailing element in the current image of the monument.

In the old monastery, also known as “Krifo Scholio”, Greeks were taught during the years of the Turkish Occupation, while later it developed into a large theological college which also operated in the New Monastery and from where a large number of teachers, priests, monks, higher clergymen as well as leading prelates of the Church graduated. Four patriarchs of Jerusalem came from here, two Ecumenical Patriarchs of Constantinople and many of the highest clergymen (Gregory the 5th, Germanos III of Old Patras). The few written testimonies that have been preserved come from the archive of the monastery, which is kept in the library of Dimitsana. The monastery used to maintain a library with important manuscripts from the 12th century, several of which are kept in the National Library of Athens.

The new monastery is built around 500m to the north of the old, on the top of a cliff, at a height of 550m, and on smoother ground than the old monastery, to which it is the successor, according to historical sources. Research, therefore, concludes that the basic reason for the founding of the new monastery was the difficulty of access of the old. It is a stavropegic monastery (i.e. directly subordinated to the Patriarchate).
The new Filosofou Monastery was founded after the middle of the 17th century, and it was already in operation by 1691. Its central church was built first (1661) and thereafter several cells, without, however, the old monastery being abandoned. The iconostasis of the central church is carved in wood with elaborate ornamentation and bears icons of Cretan craftsmanship, attributed to the painter Victoras (1663). The icons on the church walls were painted in 1693 at the expense of “Mavraidis-pasha Farmakis” from Stemnitsa, who, though he had converted to Islam, went over to Christianity during the Venetian Rule. He is depicted on the western side of the church, in the guise of a typical Oriental, with a sullen temperament, luxurious clothing and a komboloi (rosary), right next to the icon of St. Helen. It is likely that the new monastery was founded originally as a dependency of the old, thanks to its economic strength and the increase in the number of monks. Later, however, the old monastery was gradually relocated there and in time was definitively abandoned.
In 1948 the Very Reverend Archimandrite Father Theoktistos Alexopoulos became abbot. During his time important works were carried out, with the help of the tireless monks of the monastery, to the benefit of its smooth operation. In 1955 it was characterised as a heritage site and from 1992 has undergone renovation under the supervision of the Ministry of Culture. Thanks to funds allocated to the plan for regional development in the Peloponnese, the directorate for the restoration of Byzantine and Post-Byzantine monuments took the initiative both of carrying out the necessary study and of implementing the work. Already restoration and consolidation work has been carried out on the monks’ cells, to the south-west of the central church, as well as the creation of pavements to access the monastery. Recently restoration and consolidation work has been approved and scheduled for the north wing of the cells and the central church.
From Dimitsana there are two routes to the Monastery of Filosofou. The first, south of Dimitsana, passing through Paliochori, after the small bridge of Lousios, the visitor arrives at the new Monastery of Filosofou, where a nun lives permanently. The second, following the road southwest after Zatouna passing the village of Markou reaches the new Monastery of Filosofou. Part of both routes is a dirt road in good condition.