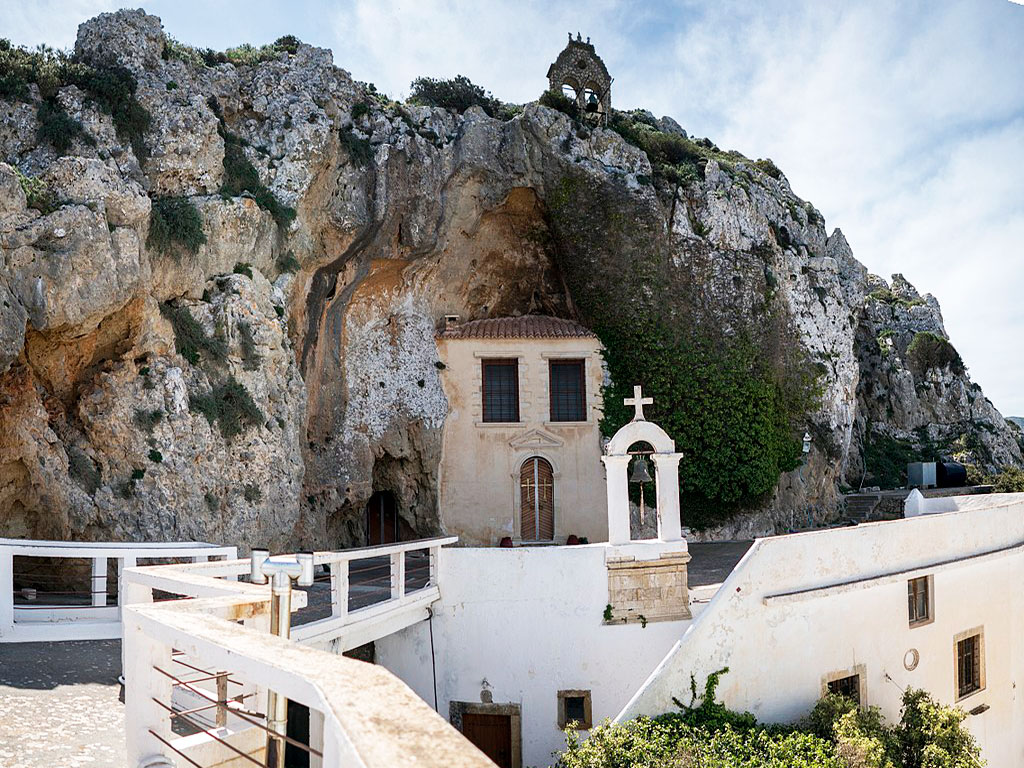 Between the rocks and the caves of Mount Stavros, at an altitude of 540 meters from the sea, is the monastery of Panagia Faneromeni or Panagia Gournia, as the locals call it. An "eagle's nest", with stunning views of Mirabello Bay, northwest of the coastal village of Pacheia Ammos, Ierapetra.

The monastery extends on two levels. At the bottom we find two-storey and three-storey buildings in a solid layout, with the outer walls in such a way as to form a bailey. Also characteristic are the very small windows, which served as loopholes, but also the three semi-cylindrical views on the north side, which strengthened the fortress character of the monastery. Finally, the hole above the main entrance, the so-called "scalpel", is indicative, from which they poured hot oil on those who tried to violate the monastery. At the highest level is the oldest building, the cavernous two-aisled (narthex and mainly temple) catholic of the monastery, which dates back to the late Byzantine period (961-1204) and another cave, which communicates with the main temple through the sanctuary. Water flows in this cave and that is why it is called a sanctuary.

The monastery of Panagia Faneromeni is a historical monastery, since due to its location it was the secluded secret place of revolutionary assemblies and the miraculous refuge of the persecuted Cretans, both in the years of Venetian and Turkish enslavement. It is said that the first secret school operated here. The school that undertook to complete the education of just five years old Rodanthi. The later inspired heroine, who with the help and protection of the Virgin of Faneromeni, performed inimitable acts of self-sacrifice. Achievements that caused fear and awe in the Turkish conquerors.

The Holy Monastery is one of the largest pilgrimages in eastern Crete, offering to thousands of visitors every year, the donations of the Blessed Virgin. Especially on August 15, but also throughout the first fortnight, pilgrims flock to stay in the monastery, actively participating in church services, filled with faith, hope, joy and peace.

The monastery is about 24 km from both Ierapetra and Agios Nikolaos and access is from the main road network. From Agios Nikolaos, in the direction of Ierapetra, just before the village of Pacheia Ammos, we meet a detour and continue the uphill road to the monastery for another 6 kilometers.