The monastery of Timios Prodromos is a stavropegic foundation of the Ecumenical Throne which stands on the banks of the River Aliakmonas in the Pierian Mountains in the Prefecture of Imathia in Greece. It is one of the most important monasteries of Macedonia, associated with great forms of monasticism such as Grigorios Palamas, Dionysius of Olympus, Kosmas Etolos, Saint Antonios (the Patron Saint of Veria), Saint Theophanis (the Patron Saint of Naousa) and many others.

The skete was established in the 9th century but in the year 1822, a fire partially destroyed the monastery of Timios Prodromos. The only structure that survived was the chapel of the Transfiguration of the Savior. In 1835 the monks rebuilt the cells, the new katholikon and a good part of the fortified wall; at this point the monastery assumed then the form it has today. In the 1960s, part of the eastern wing was rebuilt in concrete. In addition, important renovations were carried out in 1987 and in the decade from 1990 – 2000. The monastery hosts a lot of Holy relics like the fingers of Ioannis Prodromos and the holy head of Saint Klimis, the bishop of Ohrid. It celebrates on August 29th and is open every Monday and Friday after 17:00 and Tuesday, Wednesday, Thursday, Saturday and Sunday from early in the morning till 14:00 and from 17:00 till 21:30. 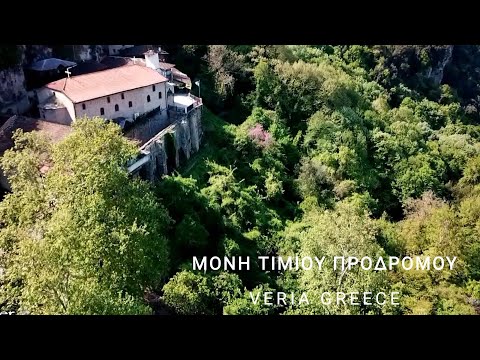