The old residents of Chorio chose the safe and windless bay of the eastern coasts to live, when the danger of the pirates ceased. The residents of Chalki started building Nimborio in 1850, taking advantage of the privileges of administrative autonomy that the sultan had granted them. In 1870 the new settlement had already been flourishing due to the marine trade with the coasts of Asia Minor and the sponge fishing. It was logical that the patron saint of Nimborio was Agios Nikolaos.

It is worth visiting the homonymous church with the marvelous pebble mosaic and the tallest bell-tower in the Dodecanese and seeing the dominating Town Hall. You can stop at the Clock Tower, a building of unique architecture, the cost of which was borne by the Chalkians who live abroad, and watch the building of the post office in early Italian modernism style. Except for the public buildings, it is worth walking around the pier and the picturesque alleys of the preserved settlement. Nowhere else in the Dodecanese can you see so many mansions clustered. High-ceiling, two-storey, three-storey, neoclassic, with a view from the pediment and tiles on the roof. 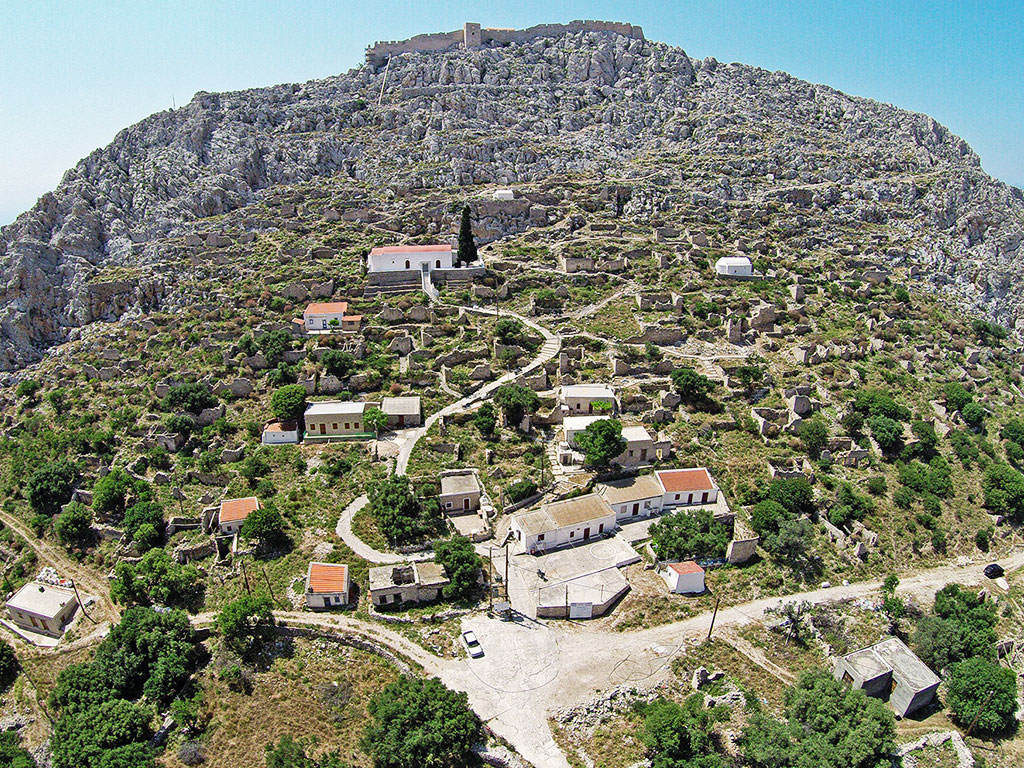 The now ruined settlement in the shadow of the Knights’ castle was built (or better hidden) on the northern slope of Ai Nikolas so as not to be an easy target for pirate raids. It was the capital of the island from the ancient times to the middle 19th century. The last residents left the area in 1970. The first building you will see coming from the old path is the country church of Agioi Anargyroi surrounded by olive trees. Following, there is the church of Sotiras (it has been declared as listed monument according to 34/15-11-1949) and the old school which is preserved in a better condition. The small monasteries of Agia Triada (Holy Trinity), Agios Konstantinos and the vaulted church of Panagia Choriani, with the enormous cypress (it has been declared as listed monument according to 34/15-11-1949) , are preserved all around Chorio.

These pilgrimages remain irrefutable witnesses of the bloom that the settlement once knew. It is worth observing the isodomic walls that are located in various ruined houses, the scattered oldest architectural parts in the cemetery, the sarcophagi and the Doric capital in Agios Konstantinos. Two thrones carved on the rock with the inscription ‘DIOS EKATIS’ were found a bit further above Chorio.