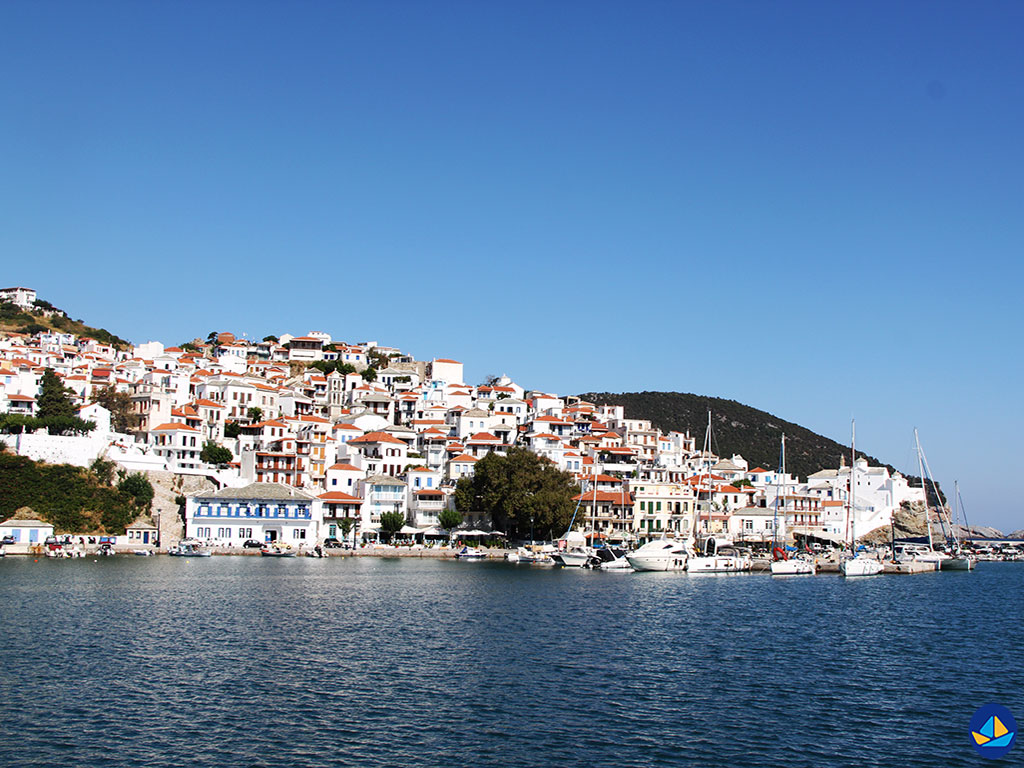 Amphitheatrically built around its perfect horseshoe harbor, Skopelos Town is a maze of narrow flower-filled cobbled streets between white washed houses with red tiled roofs, wooden balconies and bright-blue or deep-red window shutters. And if you’re after quaint churches, there are more than 120 of them here to explore with some of them, tucked away between houses. Among them, is the 17th-century basilica of Agios Athanassios, one of the island’s biggest attractions. The town’s traffic-free streets hide innumerable photogenic treasures and picturesque scenes in every corner.

Head up to the remains of the 13th century Venetian castle at the top of town and enjoy the stunning view over the port. As you wind down back towards the harbor, stop off at the Folklore Museum, housed in an 18th century mansion, to come closer to the culture of the island and see local costumes, traditional embroidery, lots of wood-sculpted furniture and many more objects of the past century. Right next to the church of the Three Hierarchs in the center of the traditional settlement, stands the house of Pavlos Nirvanas. The house is an excellent example of local architecture and the place where the famous Greek novelist, spent his childhood years.

During your exploration of Skopelos Town, you will come across tempting tavernas with vine-covered yards, bougainvillea that adorn white-washed walls, tiny churches and a plethora of boutiques and little shops, selling handmade products, jewelry and crafts. The harbor side with its port is the busiest and active part of the whole town. Ferries, hydrofoils and yachts come and go all day long while tourists and locals enjoy relaxation moments in the cafes and the tavernas behind the mulberry trees, that line the waterfront. Skopelos Town has only a little beach close to the port, more popular among the locals. Most holidaymakers head out of town where there are plenty of gorgeous and well-organized beaches.

In 1978, the town of Skopelos was honored as a Traditional Settlement of Outstanding Beauty. This reflects to strict building regulations and preservation orders in order to keep Chora, beautiful and tidy. As well as offering a really relaxing holiday in a friendly and attractive environment, Skopelos Town and its surroundings offer excellent walks, several intriguing monasteries and lovely beaches.

Glossa is the second largest settlement in Skopelos. It is located at the northwest of the island and is built on the hill above the port of Loutraki with magnificent views. It is the tall village mentioned by Alexandros Papadiamantis, in the narrative of Nostalgos, the vineyard area according to Alexandros Moraitidis. It is 32 km from the town of Skopelos and has 1195 inhabitants (census 2001). Many try to explain the etymology of her name.

Others attribute it to the tongue-shaped cobweb that exists in the sea area of ​​the settlement, and others link it to Knossos, the city that built at that point, the first inhabitants of the island, who were Minoans. There is, however, a more humorous version of the name of the Glossa, since, according to its inhabitants, the language comes out to go up the many steps of the village. Glossa and its wider area is rich in springs and has many olive trees, plums and almonds. Its houses, with Macedonian influences, are two-storeyed with ceramic roofs and wooden balconies, the front of which is covered with iron railings. Throughout the steps of her cobbled streets, she will meet even women with local costumes, dresses and inhabitants who maintain their traditional lifestyle, customs and linguistic idiom.

The settlement seems to have existed since ancient times and was probably a colony of the Cretans of the Minoan era, because traces of prehistoric residence were discovered. The surrounding area, both in Glossa and Loutraki, is of great archaeological interest, since in many places there are ancient towers, palaces and buildings of various ages of antiquity. In Platana, north of Glossa, in the monastery of Agios Taxiarhis, there are buildings of an Early Christian temple (single-aisled basilica with a dome, built in 672 AD) in the courtyard. This is the oldest temple of Skopelos.

Loutraki is the first port of Skopelos, where the ships or flying dolphins are usually stopped here when they come from Skiathos, Volos or Ag. Konstantinos then continue their journey to the port of Skopelos. There was the third ancient town of Skopelos, Selinous, founded by the Halkides in the 8th century BC. century. From the ancient city only part of the southeastern walls of the 5th-4th c. century and relics of an ancient building of the same era. Temple reliefs, small marble statues, Hellenistic and Roman inscriptions and tombs were found at times from the foundations of the settlement. Southeast of Loutraki, ruins are preserved from the Roman Baths, to which Loutraki is named today. In 1865, the marble statue of Athena was found in the area, a copy of the Virgin Athena of Pheidia, which is located in the National Archaeological Museum of Athens and other finds found in the Archaeological Museum of Volos. Near the beach of Loutraki is the Byzantine church of Ag. Nicholas, which overlooks the sea and protects our sailors. The church of Agios Nikolaos is founded on an old Byzantine church of the 7th century. Inside, the ruins of its walls and sections of marble chest and temple are distinguished.

The village of Palaio Klima Skopelos, is found of the island between the village of Neo Klima and Glossa. It is 24 km from the town of Skopelos. It is a verdurous village built amphitheatrically, with old stone houses facing the Aegean Sea. Klima is one of the picturesque villages of the island of Skopelos. Today, a little has changed, despite the interventions of altering its traditional character. It is located close to Glossa, the southwest side of the island, which looks out over Skiathos and Northern Evia. The village until the early 1950s was divided into two districts, formerly called Upper and Lower Klima. The lower village, as the Klimateans call it, is older than the top. It was founded according to the sources in the 18th century by the inhabitants of Glossa, who built there, something like a small rural settlement of the type Ananias and Kalogeros, which today we meet on the island. The village church, Agioi Anargyroi, was built in 1828. Perhaps, however, there was a small church there older. The lower village had a square in Tsichiraflos, very spectacular, you could see from there Glossa, Loutraki, Pelion, Skiathos, where there was a large, grandiose tree, very imposing, the Tsitsiraflos. In the stream that separates the two settlements, some old olive mills were preserved, Caligari, as the locals said. With the earthquakes of 1950 the village began to lose its glory and beauty. Its inhabitants went to the upper village, others to Loutraki, and few remained until 1965, when the other earthquake, which destroyed the upper village, drove them forever. The Upper Village is, as mentioned, younger than the Lower. It began to be established from 1880 onwards, perhaps some time before. Its inhabitants were engaged in agriculture, mainly viticulture, resin production and livestock farming. The most characteristic feature of the Klimatians was the enthusiastic character and the hospitality. It should also be noted that the Klimatians were one of Skopelos's finest revelers. At both festivals and weddings, but also some Sundays, there was a dance and feast in Velana's Square, where many Glossites also came. Live traditional festivals were from Agioi Anargyroi (1 July and 1 November), Panagia of Eliotysa, Agia Paraskevi etc. On Wednesday, 1965, the village was picked up by earthquakes. Later, in 1981 they moved to Elios, where there is the new settlement of Klimatians under the name Neo Klima (Elios).

Just below the forest of Vathia on Mount Delfi (688m altitude) and next to the sea, is the village of Nelima (Elli) of Skopelos. At 18 Km from Skopelos there is this new settlement, which was created in 1981, after the destruction of the Old Klima by the earthquakes of 1965 - when the inhabitants of the Old Klima abandoned their village due to the landslides, but also to settle near sea.

Pefkofyti, enchanting this area of ​​Skopelos that was built in Elios, with the beautiful sandy beach of Hovolou and the splendid shades of its water, is very close to the village. There is a beach along the whole length of the village, small pebbles, a bigger beach with stones and sand, just as we mentioned the amazing Hovolos. The newly built houses, the picturesque port with the marina, the beautiful beaches and the rich forest, are an ideal destination for a quiet and relaxing holiday. In 'Elios you will find many rooms to let and hotels, cafes and restaurants. There is also an organized marina for pleasure boats and slides. 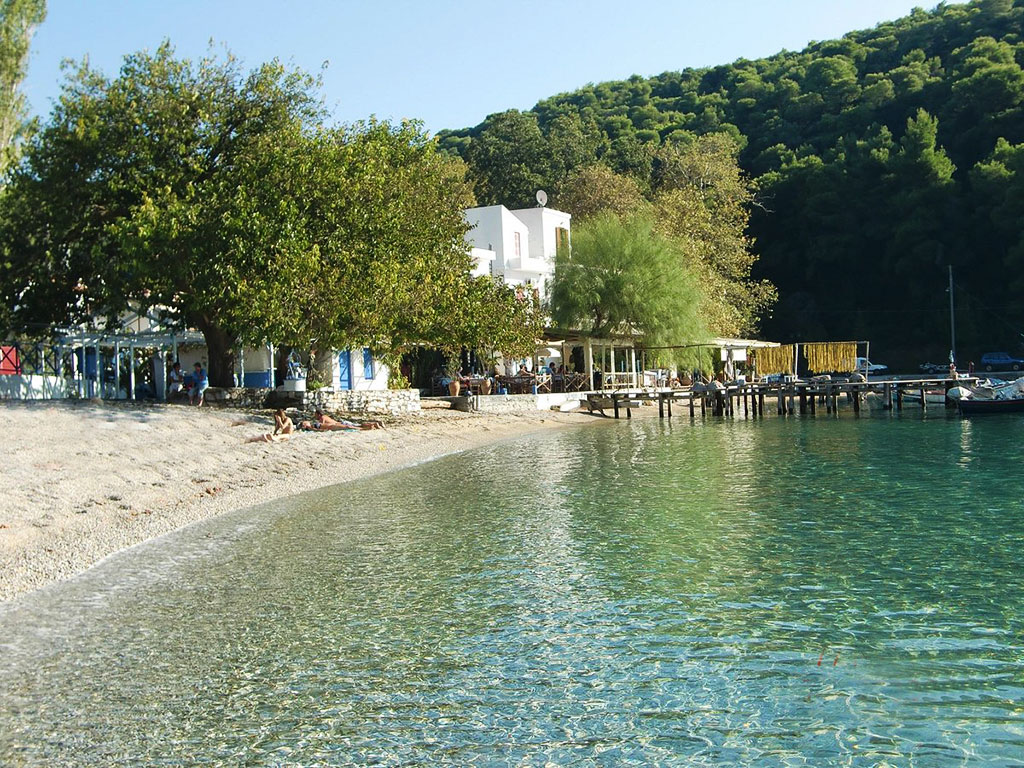 Agnontas is a tiny, sleepy village on the west coast of Skopelos Island. A very picturesque fishing village which sits within a lovely natural bay, surrounded by pine trees. Today, Agnondas is the island’s second port, mostly used by fishing and sailing boats, sailing in the Aegean. It is also used as a backup option when winds are too strong and ferries cannot sail into Skopelos Town port. The village is named after the Olympic athlete Agnondas, who won the running race, of the 569BC Olympic Games. His face is depicted in a silver coin of the classical era and a statue has been erected at the port.

Agnondas lies approximately 8km away from Skopelos Town and is connected to the capital town by the local bus that runs around Skopelos. The village itself has a small, pebble beach with emerald water but some of the island’s most gorgeous beaches can be found in the area around the village. It is also home to some of the top-rated restaurants on the island, especially in case it comes to seafood. Agnontas is not the most popular place to stay as you are away from the hustle and bustle of the main town. However, there are a few accommodation options.