The settlement of Molos is the ideal spot for rest and relaxation. It has small taverns and shops and it is an appropriate destination for family holidays since there are no cars in the village.
Molos beach is one of Skyros's most popular and well organized beaches. Families with young children prefer the clear and shallow waters of that beach.

Aspous is the seaside settlement that you will meet on the road from the harbor to Chora (4.5 km S). It is a picturesque and quiet settlement with a beautiful sandy beach, ideal for relaxation.

You will find several accommodation and restaurants. Aspous beach has spotless, turquoise water. It does not belong to the crowded beaches, so you will enjoy the sun and water without much noise.

It is worth seeing the ceramic workshop in the area.

Atsitsa is a beautiful seaside settlement that hosts one of the most picturesque beaches on the island. The small bay with boats sailing in the calm waters and the houses built around it, is one of the most picturesque tourist resorts of the island. It is located on the west coast of the island, about 18 km from Chora.
Particular feature of the bay is the tiny island of Atsitsa, which is located opposite the coast at 300 meters. On the beach there are still the stone columns, remnants of the railway line constructed in the early 1900s for the transfer of iron from the mines of the mountain.
In Atsitsa you will not find beach bars or any other kind of rest areas, so it is wise for the visitors to bring their own supplies. In Atsitsa the office of Alternative Tourism of Skyros attracts many fans of the kind and offers many suggestions for pleasant activities.

Linaria is built around the harbor and offers basic infrastructure and services to visitors and the docked boats. It is a small settlement with all white houses and a crystal-clear beach.
It is the second largest community of Skyros after Chora and has many cafes and taverns, tourist shops and hotels.The port is also the main point of buying and selling fish in the island.
Linaria is also the starting point for the excursion boats to southern Skyros. 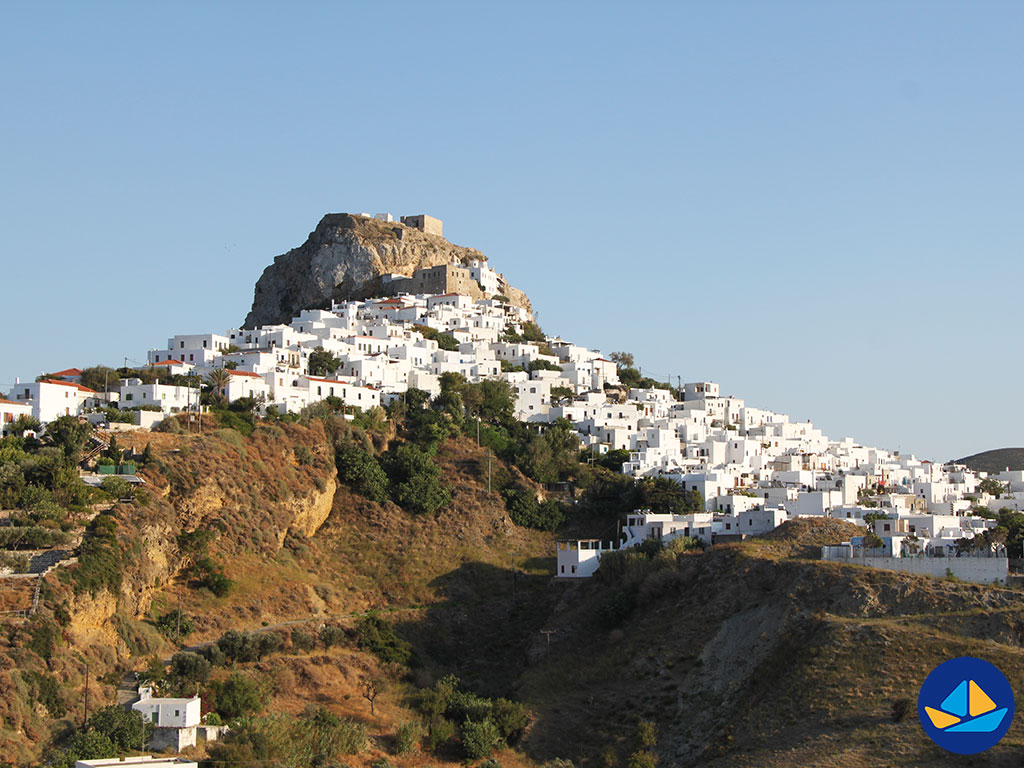 Built amphitheatrically under the Byzantine castle, Chora offers panoramic views of the coast and the blue of the Aegean Sea. Chora is the capital Town of Skyros and home to almost 90% of the island’s population. It is a charming little town with a labyrinth of narrow cobbled streets steeply winding up and down, a maze of white cubic houses with flat roofs creeping up the hillside and many Byzantine churches and nice squares scattered in between. Walking through the narrow streets, you can wander around the town for hours, admiring the traditional architecture and enjoying nice views all around.

The town is rich in culture and there is so much to see, including the Byzantine castle at the highest point, the church of Agia Triada with its fine frescoes and the Byzantine monastery of Agios Georgios (St. George), originally founded in the 962. The fortress was built in defense against pirate attacks and the people of the village below used to find refuge there every time a pirate ship appeared on the horizon. Unfortunately, much of the castle has fallen into decay in the course of time. The Monastery of St. George crowns Skyros Town, within the lower walls of the Byzantine fortress and features a small church with an ornate gilded screen and some interesting 18th-century frescoes. As you walk around the town, you will come across a nice square with beautiful views over the eastern coastal strip and the lovely beach of Molos. The square is known as Brooke Square and is home to a bronze statue in memory of Rupert Brooke, a British poet who died at sea during the First World War and buried on Skyros Island.

From the square you can visit the Archaeological Museum and the Folklore Museum. The Archaeological Museum consists of 3 rooms and a courtyard, and hosts a rich collection of findings on the island from the Bronze Age up to the Roman times, most of which coming from the ancient town of Palamari in the north of Skyros. One of the rooms is a representation of an old Skyrian house and what it looked like in the past century. Next to it is The Manos and Anastasia Faltaits Museum, an historical and art museum that should not be missed. The museum unravels the island’s folklore tradition through all kinds of objects, including a collection of Skyrian costumes, embroidery, antique furniture, ceramics, cooking utensils, historical documents and vintage photographs.

Chora is surrounded by charming coastal resorts that have been developed for tourism and which offer all the facilities for travelers. In Chora there is a great selection of accommodation options available scattered all around, and is the perfect place to stay and explore other parts of the island.