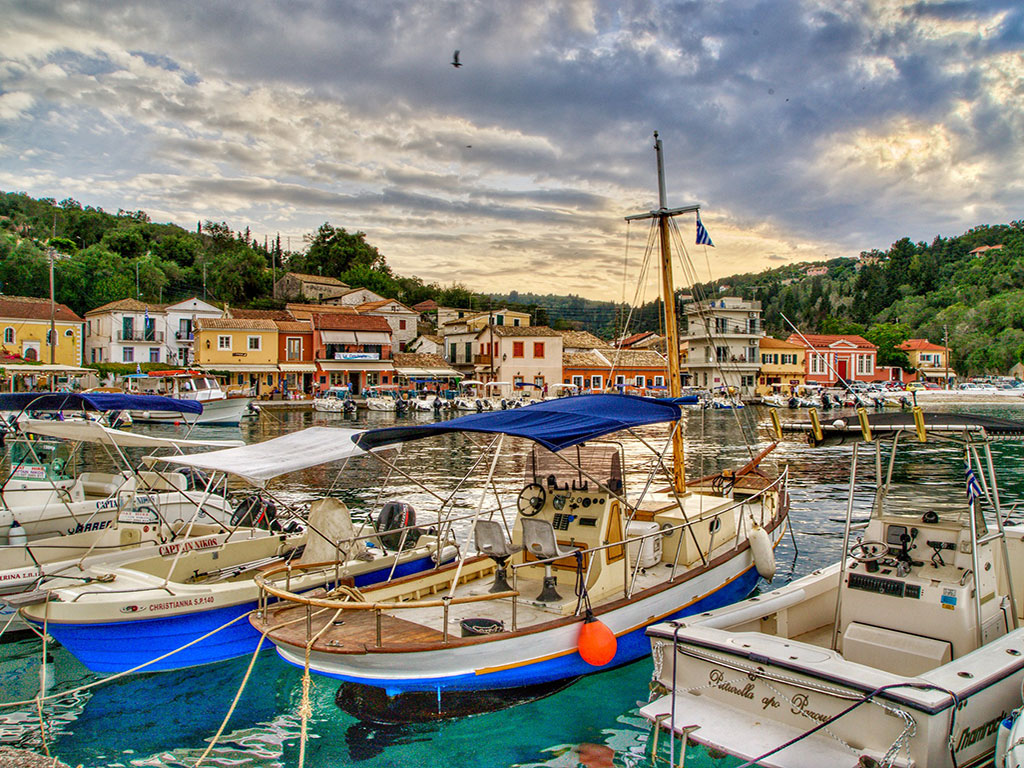 Longos is the smallest resort of Paxos. It is situated on the northeast coast of the island, 5 km from Gaios, around a small picturesque harbor. A picture-perfect postcard fishing village with beautiful beaches on the coastline either side of the harbor, surrounded by olive groves and pine trees. The seafront is lined with many tavernas with very high standards of cuisine, famous for their delicious seafood. Longos has a small marina and stone-built traditional mansions with tiled roofs.

At one end of Longos harbor stands an abandoned building of an old soap factory. Other sights include the church of Zoodochos Pigi with the impressive frescoes and an old olive mill. There are daily organized trips to Antipaxos, to the nearby beaches and to the amazing underwater caves on the west coast. Many trailing paths also start from Longos and lead to the inland. Local amenities are limited but you can find a few gift and jewelry shops. Longos is a romantic village with a relaxed atmosphere, especially during the evenings. A place you will fall in love and return for sure.

This small settlement on the island used to be the capital. It is located in the center of the island, on the road that connects Gaios to Loggos. It is one sparsely populated place with traditional houses and cafes with magnificent views of sunset from Erimitis Church of the Holy Apostles at the end of the road, which begins opposite Saint Spyridon, from the gas station. It is surrounded by olive groves and centenarian olive-trees.

The beach is within walking distance and the main elements of the village are the peacefulness and tranquility. The old acne becomes apparent to the visitor from the first moment, because of the many beautiful houses that were homes for the locals. The majestic scenery of Erimitis with the steep rocks, Kastanida, an area with wild natural beauty and Ortholithos, an impressive vertical rock at a short distance from the west coast of the island, are places that you can visit from Magazia settlement. 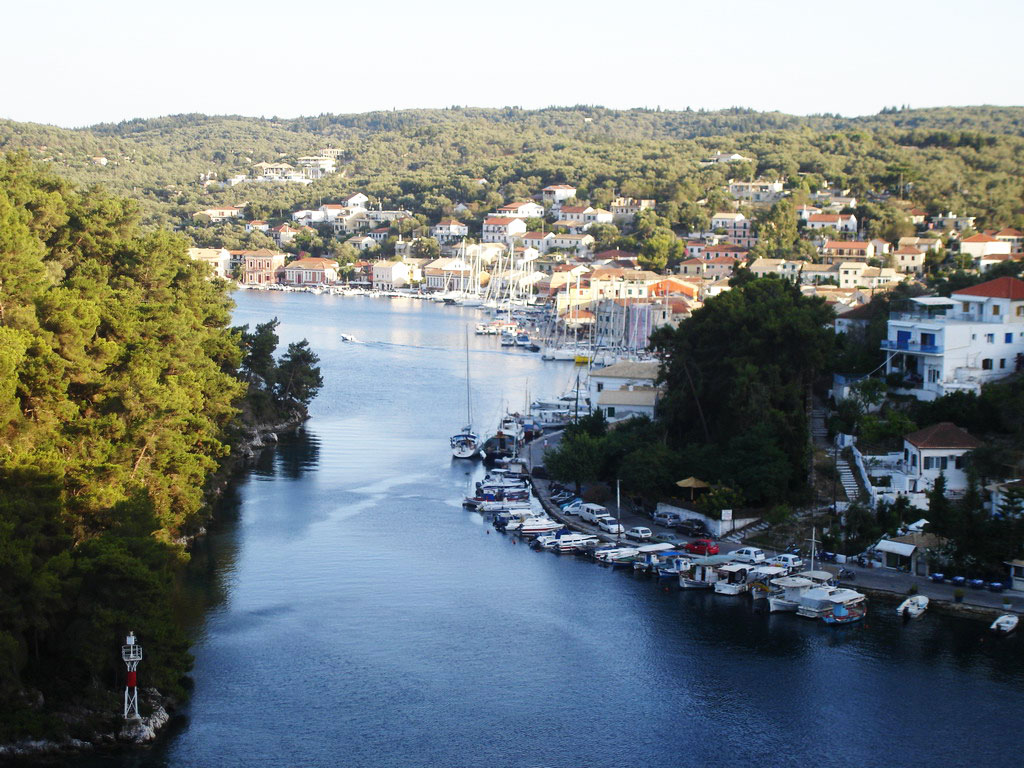 Gaios is the charming capital of Paxos, the largest village and the port of the island. It is located on the south east coast and its picturesque port is protected by the two small islands of Agios Nikolaos and Panagia. The islet of Panagia is dominated by a monastery and the other islet has a Venetian castle dating back to 1423. Between Gaios and the islet of Agios Nikolaos a natural floating corridor is formed inlet resembling a fjord. The settlement owes its name to Agios Gaios (St. Gaios), a disciple of Paul the Apostle, who taught the residents of Paxos, Christianity and whose tomb is located under the old church of Agii Apostoli (Holy Apostles).

Among the most important attractions are the church of the Ascension of the Lord in the main square, the churches of Agii Anargyri and Agii Apostoli (Holy Apostles) as well as the Folklore Museum with exhibits of the island’s history, from the prehistoric era until the period of World War II. In the museum you can find the resolution of the Ionian Parliament for the annexation of the Ionian Islands to Greece in 1864. A bit further stands the old governor's building that reminds the presence of the British on the island.

Colorful houses, typical examples of neoclassical and folk Ionian architecture, colored with faded burgundy and pale ochre compose a beautiful setting. In the narrow, picturesque streets of the village there are many small hotels and apartments to rent, but also shops selling folk art items and local products. The harbourfront is lined with bars and tavernas, perfect for sitting down and enjoying the bustling port where many fishing boats and small sailing yachts find shelter. 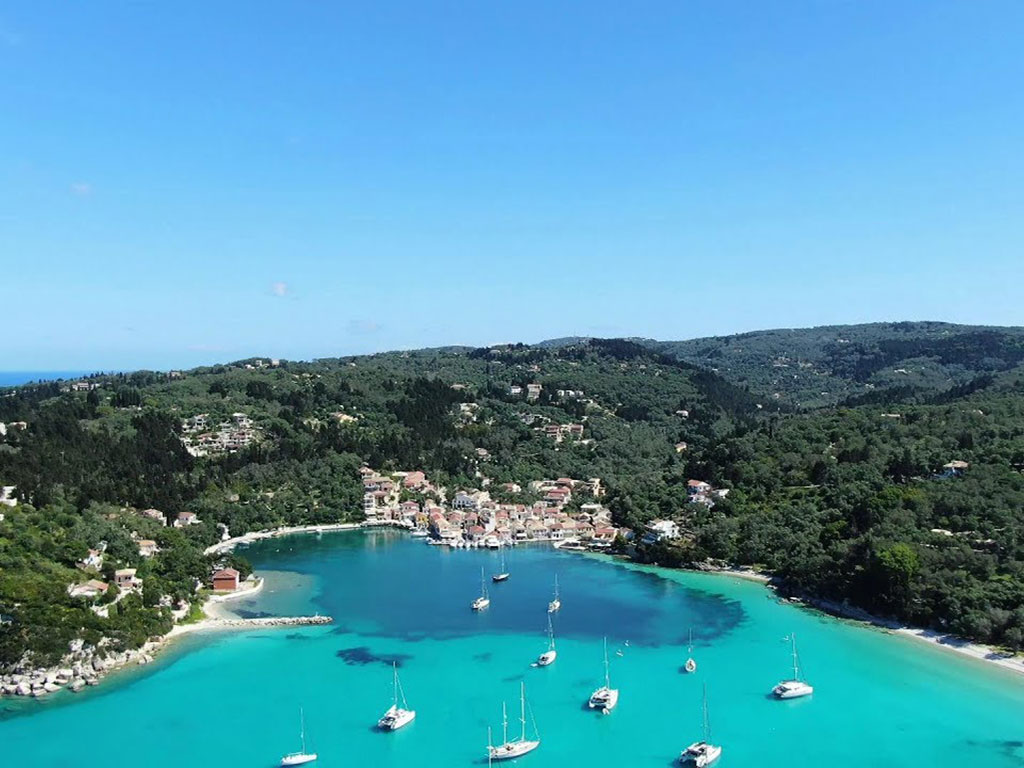 Lakka is the second largest village of Paxos. The small picturesque village is built in a sheltered bay surrounded by hills covered with olive groves and cypresses trees, on the north tip of the island. Its bay is very safe and extremely popular for mooring sailing boats and yachts. Here, there are a few dozens of stone-built houses, narrow paved streets and a square with the church of Ypapanti, built in 1744 AD. The church has an impressive bell tower and a beautifully crafted iconostasis.

Along the waterfront and around the two squares, there are cafes and traditional tavernas that serve local and Mediterranean cuisine. Near the village stands a stone lighthouse, built in 1832 which offers amazing views and a ruined fortress where the villagers used to find refuge, when pirates looted the area.

In Lakka visitors can find some family hotels, hostels and rooms to rent. In the village there аrе two beaches, the pebbled beach of Kanoni and the sandy beach of Harami with trees around the coast that offer natural shade. Other nearby beaches can be found on the east coast of the island, just outside the Lakka Bay, but in most cases can only be reached on foot or by boat.