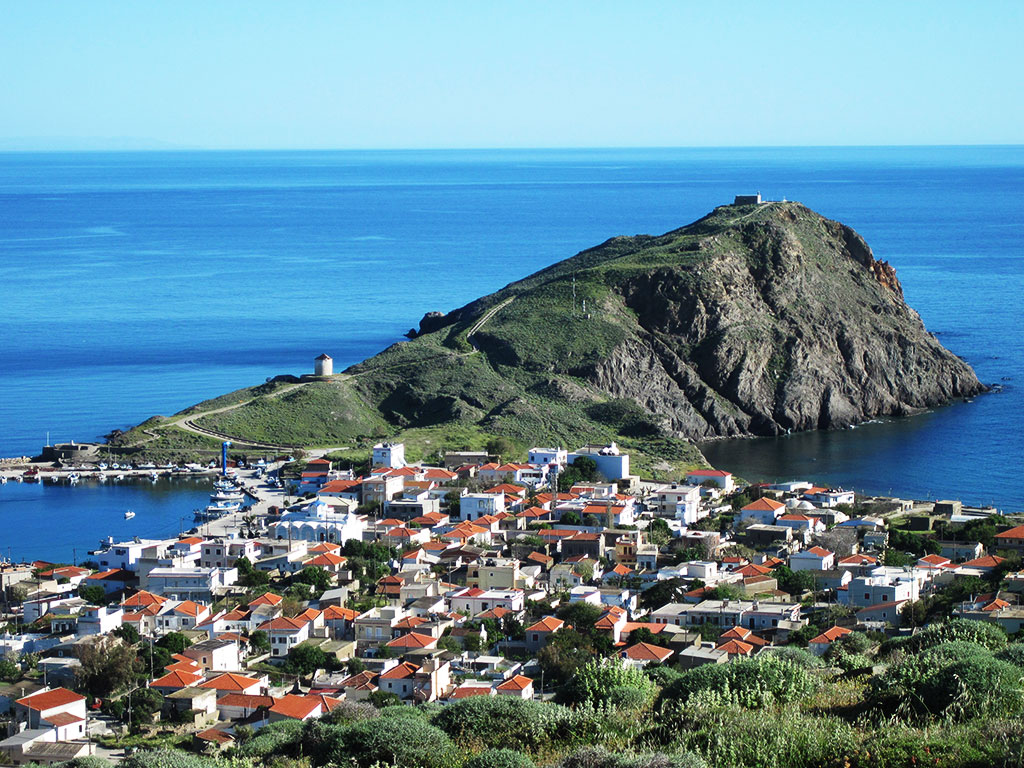 The town of Psara is built amphitheatrically around the picturesque port of the island. It is the only village with a population of between 400-500 people, which almost doubles in the summer, since many Greeks who have origins from Psara come for their holiday on the beautiful island. The small town is located оn а small rocky peninsula, on the southern side of the island and features cubic stone-built houses with red tiled roofs, narrow cobbled streets, churches and public buildings that reveal the glorious past of Psara. The islanders’ sole source of livelihood has always been fishing and shipping, with some tourist development in recent years.

There are several historical places to explore in the village including the Holocaust memorial, the church of Agios Nikolaos (St. Nicholas) at the top of a small hill and the church of the Transfiguration of the Savior, in the center of the village. The latter is a three-aisled basilica, built in 1770 that was destroyed by the Turks in 1824 and rebuild in 1885. The village also hosts an archaeological museum with various findings from all over the island and the house of Konansttine Kanaris. Konstantine Kanaris was a national hero with a significant role during the revolution against the Turks. In June of 1822, he sank the Turkish flagship in the harbor of Chios, killing 2000 Turks including the admiral Kara Ali Pasha, in revenge for the Chios massacre. Many years later, he became Prime Minister of Greece. The most important historical spot is the rock of Mavri Rachi, which stretches to the west of the port of Psara. It is the place where on July 5th 1824, the Ottoman Turks slaughtered the inhabitants of the island during the Greek War of Independence. Besides the history, it is the best spot to enjoy stunning sunsets and offers panoramic views.

The village offers a few hotels and rooms to rent, as well as some traditional cafes and taverns where you can taste fresh lobster with pasta. Nightlife is limited making it perfect for those seeking peace and tranquility in an authentic island village. There is a lovely beach next to the port and several others within walking distance. If you like hiking, you can reach some isolated beaches on the north and west coasts on foot or you can just hire a boat to take you there.