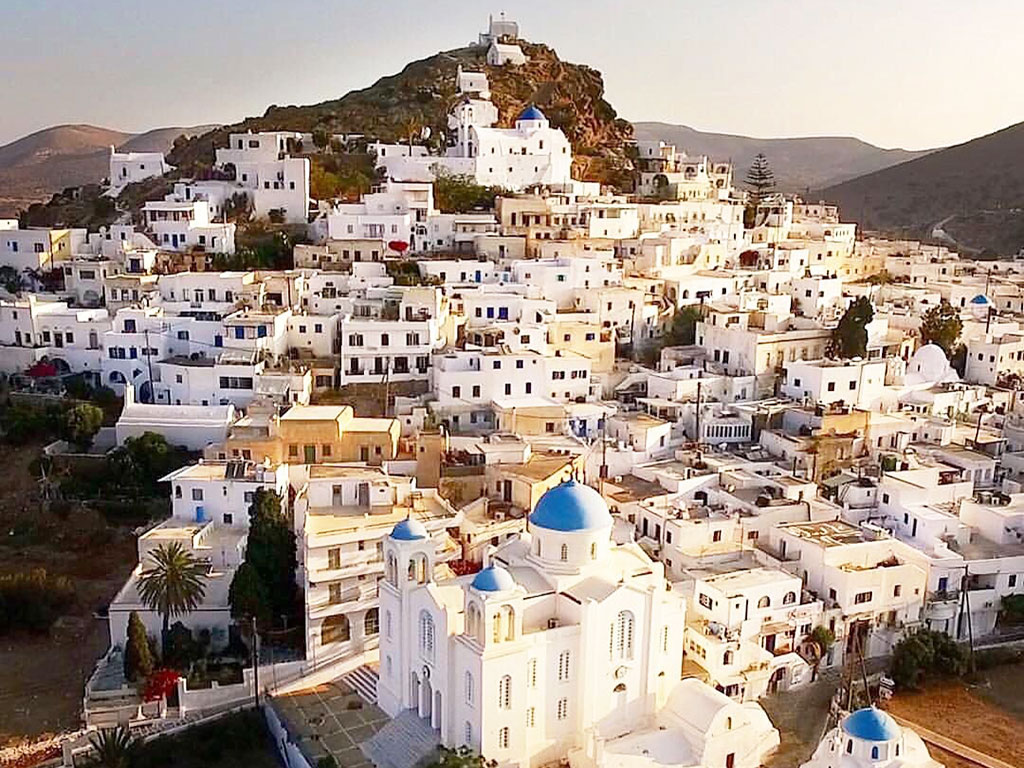 Ios Chora is amphitheatrically built on a hill, overlooking the island and the glistering Aegean Sea. Located about 20 minutes from the port, Chora offers plenty of places to discover. Filled with whitewashed flat-roofed houses, winding cobbled streets, arches passing over the narrow alleys and numerous small chapels is one of the most picturesque villages in the Greek archipelago. Chora remains authentic and typically Cycladic so much that has been declared a preserved settlement.

The town is built like a labyrinth and it takes a long time before one learn how to find the right way. The innermost part is free of motor traffic and transports are done by donkeys.  The main street goes through the village, it starts in the square next to the cathedral and ends at the windmills. About in the middle of the street is the main square, so peaceful in the day but so full at night that you can barely get from one side to the other. Walking east past the square you will come across 12 traditional windmills, located in the square of the Mills as it is known. They were on standby around the clock to grind grain but now most have fallen into disrepair, however they make one of the most photographed spots on the island. Carry on past the windmills and you will reach the open-air theater Odysseus Elytis, a theater of ancient Greek style built of marble and stone, which hosts brilliant performances, concerts and events throughout the summer.

The old town stretches behind the main road of the island. Narrow gaps take you to into a maze of cobbled streets, dotted with shops, bars and tavernas. During the day Chora is a quiet neighborhood but when the sun goes down the village is transformed and rocks all night long. Tourists from all over the world come to Ios to enjoy this party atmosphere. Some of the small cubic houses open their doors to become clubs and bars and stay open until the sun comes up, giving the younger crowds plenty of time to party. The charming postcard-like settlement is renowned worldwide as a party village, a reputation that has lasted for decades.

One of the few old buildings in the new part of Chora is a neoclassical building which houses the Town Hall but also a small Archaeological Museum in its ground floor with archaeological finds from the prehistoric period. Almost opposite of the Town Hall, stands the quaint church of Agia Ekaterini of the 17th century. In the heart of the old town, there are many more small churches such as Agios Andreas and Agia Kyriaki. At the top of the village, just below the rocky crown of the hill is the church of Panagia Kremniotissa. A path leads up through the rocks to the church of Agios Georgios (St. George), just below the top. Take a walk to the top of Chora to visit the church of Agia Irini. It is a great sunset spot where you can look down onto the town’s rooftops and enjoy a stunning sunset before the sun dips down out of view behind the neighboring island of Sikinos. On the way up you pass old parts of Chora that compose a truly lovely setting reflecting the charm of simplicity. 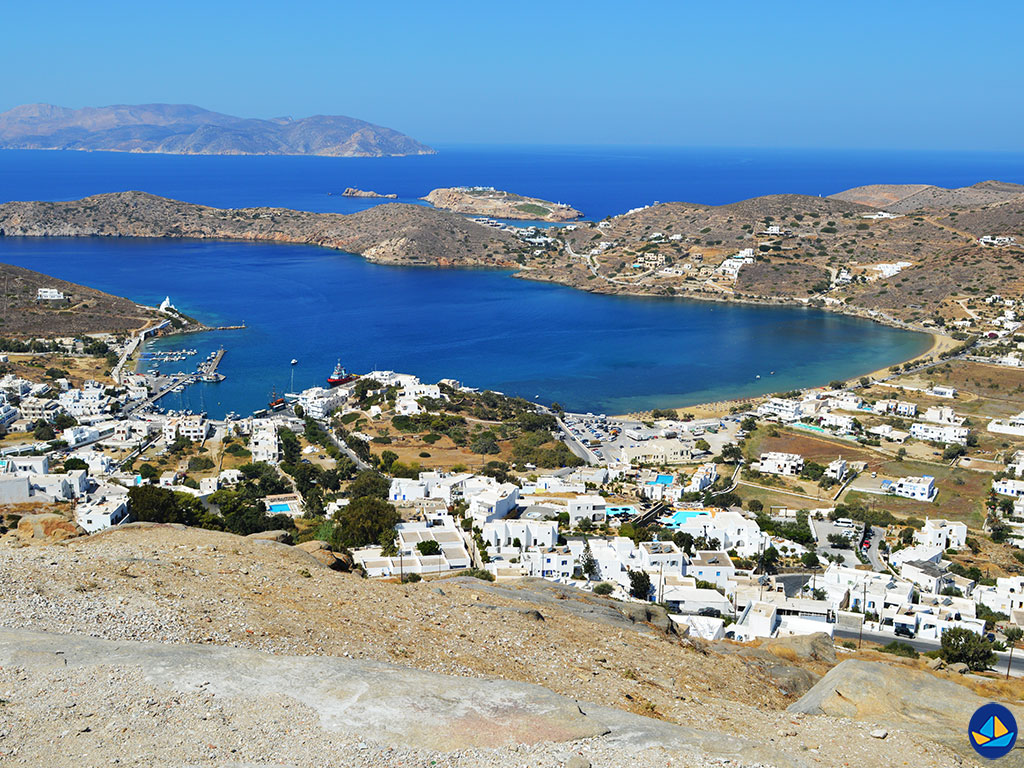 Ormos or Gialos as the locals call it, is a small settlement built close to the port of Ios, one of the most sheltered natural ports of the Aegean. At the right entrance of the port, stands the picturesque church of Agia Irini of the 17th century. A walk to the church is worthwhile since it offers beautiful views of Gialos. Gialos is the second largest village on the island and it lies about 2 km from Chora.

Around the main square there are supermarkets, souvenir shops, car rentals and travel agencies as well as a wide variety of hotels, taverns, restaurants and cafes. Gialos has a well-organized marina which is usually packed with luxury yachts, sailboats and fishing vessels during peak season in Ios. Gialos bay has an internal coastline that spans over 4 kilometers and offers walking and trekking routes to three separate beaches. The closest one stretches at the left side of the port. A lovely beach with fine golden sand and crystal-clear sea. Just a few meters from the port is the little church of Agios Georgios Basmenos. It is the starting point of a traditional cobbled path that goes all the way up to Chora. Gialos is also the starting pont for excursion boats which make day trips to the beaches of the island and to the nearby islands.