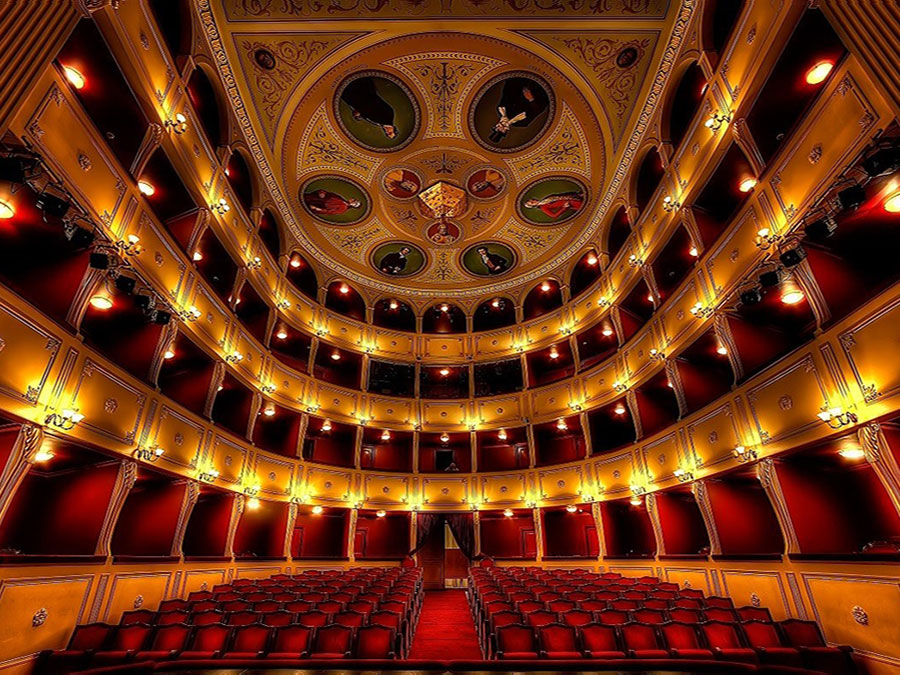 The Municipal Theater Apollon is one of the “gems” of Syros, an emblem of the cultural development of Ermoupoli. It was built in 1862-1864 by the Italian architect Pietro Sampo and is located in the city center, behind the Cultural Centre on Vardaka square.

It is a two storey building with a simple exterior decoration and an impressive interior. The design is influenced by at least four Italian buildings, including La Scala in Milan. During its construction, the theatre stage was 9 meters wide and 10 meters deep, with space for the orchestra in front of the stage and a gallery. The decoration of the wooden galleries built in three rows was simple. The seats, handrails and the curtains were made of velvet. Around the candelabrum on the ceiling of the Municipal Theatre “Apollon” were murals with representations of poets and composers.

During World War II the Municipal Theatre “Apollon” was largely destroyed, and subsequently renovated: the overhaul began in 1970 and caused great alterations in the interior of the theatre – among others, the wooden gallery was replaced with concrete balconies. The theater reopened for the first time in almost 40 years in 1991, although the restoration work by architect Peter Pikionis, was completed in 2000. Since 2002 in the theater operates the “Memories of the Municipal Theatre Apollon” space, with various exhibits, such as posters, costumes from various performances and others.