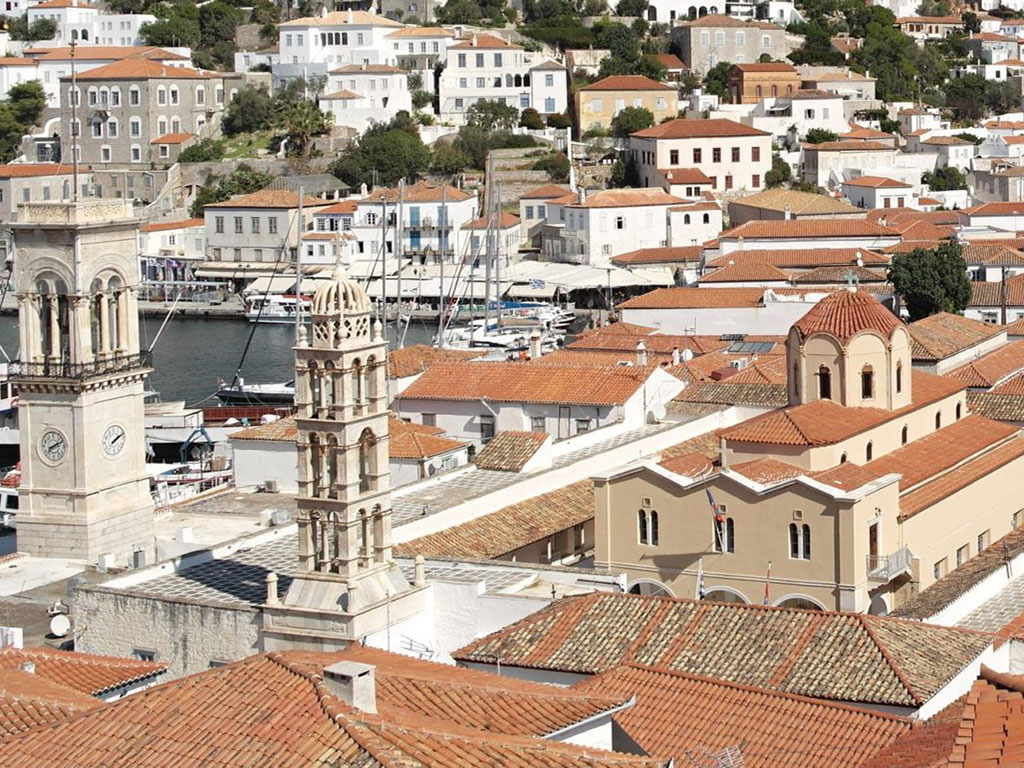 The Cathedral of the Virgin Mary

The Cathedral of Dormition of the Virgin is the Metropolis of Hydra and is located in the center of the harbor, within the Monastery. The Temple is today a Museum of Art, but it does not cease to be Hydra's main parish. The inauguration of the Temple was carried out before the 17th century. in the name of Ag. Charalambous and its conversion was made in the early 17th century. The Katholikon is a three-aisled vaulted basilica with a dome and aisles divided by colonnades. The middle one is dedicated to the Assumption of the Virgin, Charalambos and the left at Ag. Nicholas. Impressive is the marble Temple of the Temple that was built on the 2nd of Jerome by the architect Gabriel. It is made entirely of solid white marble with rich and intense relief decoration (sculptured crosses, sculptures, screens, Ionic baskets etc.). In the iconostasis are also the remarkable icons of the Temple with richly decorated coverings that have been gifts to the Temple by wealthy Hydra and Sailors. Impressive are also the two marble bells of the Temple with a rich sculptural decoration, one of which has a watch. The "small" was erected in 1806 and the second and largest in 1874. The sounds of the great bells that sound from the Grand Commons create awe and devotion. The general decoration of the Temple is amazing: The icon of Phaneromeni's iconostasis, located in the temple's iconostasis, icons of the iconostasis, as well as portable ones such as Virgin Mary the Virgin Mary, Virgin Mary of Maliki, Hymn of the Hydra, Annunciation of the Theotokos, Spyridon along with the chandeliers and chandeliers add glamor to the view of the Temple. There are four chandeliers, of which Kousourelis' central work is silver and unrevealed art. The same design is followed by both smaller ones in the central aisle. But the most precious and legendary is the exuberant chandelier located near the beautiful gate and adorned with the heads of the Louvres of France, which, as it is said, was taken by Paul Kountouriotis by the master Sarkosis, who in turn had taken him from Versailles. It should be stressed that all chandeliers of the Temple and pots do not work with electricity but with candles or oil. The many relics of the Temple that complement the rich interior decoration are exhibited at the Ecclesiastical Museum that operates within the Monastery's premises. The Temple is located in the Monastery, formerly the center of the religious life of the island and a place of important decisions In the years of the Revolution, he offered much for the struggle of the homeland, and in the monastery of the monastery the legendary sailors were often summoned to please the Virgin Mary for their successes in the struggle. In 1750 it was destroyed by an earthquake, but it was rebuilt a few years later with plans of Venetian and Genovese architects. The Hydra Town Hall is housed today in the Monastiri area, and the Ecclesiastical and Byzantine Museum of Hydra is housed in the old cells. In the courtyard you can see busts of Lazaros Kountourioti, Andreas Miaoulis, King George I and Antonis Lignos, crafted by Dimitris Philippotis. In the courtyard you can also see the tomb of Lazaros Kountourioti as well as the monument of the dead in the Balkan Wars.

Church of Agia Varvara of Hydra

Church of Ypapandi of Hydra