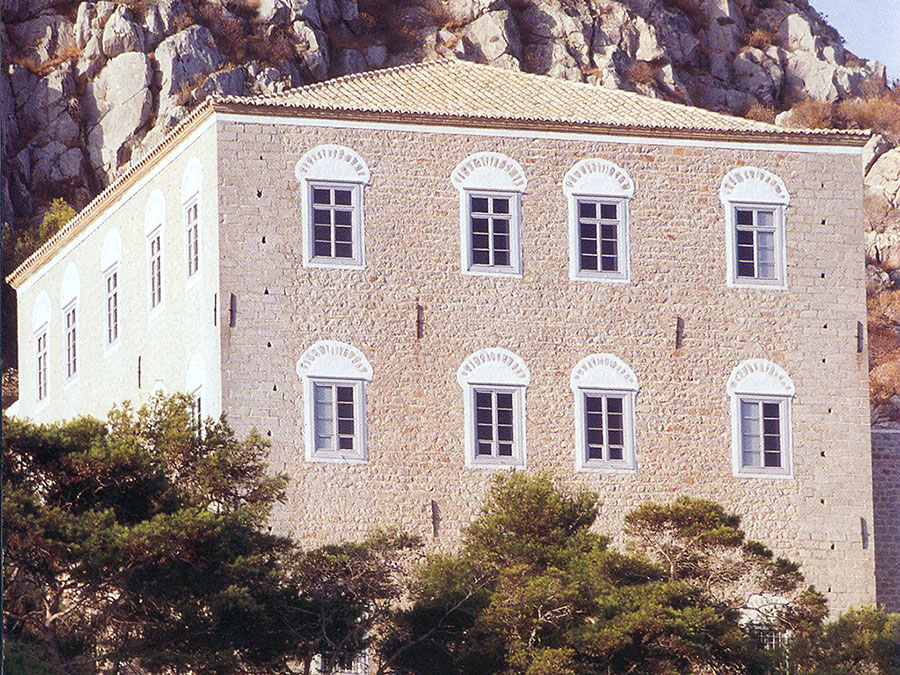 On the hillside, on the west side of the harbor of Hydra, stands among the pine trees the Mansion of George Kountourioti , built in the early 19th century. Georgios Kountouriotis, Lazarus' brother, was one of the largest shipowners of Hydra, the most pre-revolutionary era. He was actively involved in politics during the struggle and in the years of Independence. He was born in Hydra in 1782 and died in 1858 in Athens. They came from a rich and historical family, with a great naval tradition and a tremendous education. He took part in the Second National Assembly in Astros and in December 1823, at the initiative of Alexander Mavrokordatos, was elected President of the Legislature in Messolonghi. He had two children, Andrea and Maria, widowed daughter and later wife of Benizelos Roufos, while his grandson was Paul and his great-grandson, Theodoros Kountourios. He was elected President of the Executive Council from January 6, 1824 to April 12, 1826, when he was forced to resign. In 1836, he was the first President of the Board of Directors of the "Educational Society", which is now known by Arsacea Schools. After the assassination of Capodistrias, to which he acted as opposition, he was elected Senator, Senate President, President of the Council of Ministers and Prime Minister of the Greek State from 8 March 1848 to 15 October 1848. The Archontiko inherited another form of political life in the country, George's grandson, Paul Kountouriotis , who served as fleet chief, Minister of the Navy, Regent and President of the Republic during the interwar period. In 1991 the three-storey building was purchased by the Ministry of Culture and after reconstruction work was transformed into a Museum of Post-Byzantine Art and History. In the Mansion of George Kountourioti, personal items, objects, relics of the Kountourioti family are exhibited and exhibits from the Modern History of Hydra.