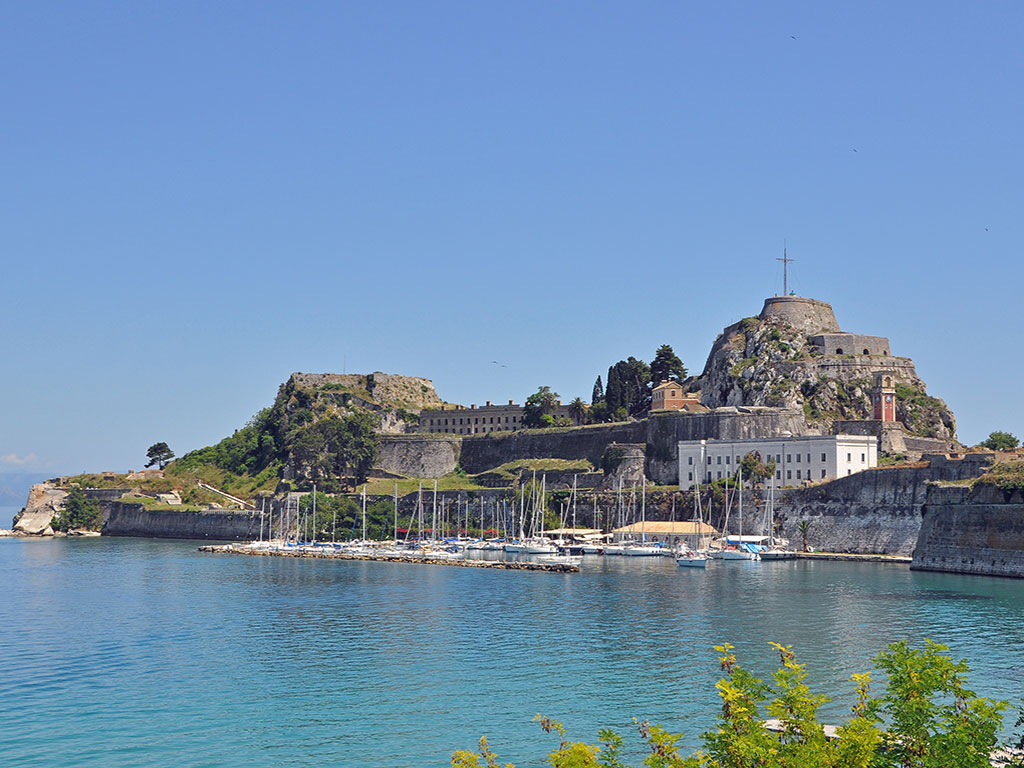 The Old Fortress or Fortezza

Standing proud on a rocky peninsula on the east side of Corfu Old Town, Corfu’s Old Fort dates backs to the mid-6th century AD. It was built after the destruction of the ancient city by invaders and the need of people to find shelter inside the fortified peninsula at the tip of the city. As well as being the signature landmark of the island, the Old Fortress is one of the most impressive fortification edifices in Europe. The Old Fortress of Corfu is a Byzantine fortress; however, the current architecture of the fort is due to the Venetians (1386-1797). According to the historians, the fortress enclosed the city of Corfu until the 15th century and successfully repulsed all three major Ottoman sieges: the great siege of 1537, the siege of 1571 and the second great siege in 1716.

Following the destructive Turkish siege of 1537, the Venetians constructed new defensive zones incorporating new bastions and towers which exist to this day. The construction was based on plans by great Veronese architect Michele Sanmicheli and his nephew Gian Gerolamo Sanmicheli, who designed bastions for the fortress which are considered masterpieces of military engineering. Their major projects included the west front with the two pentagonal bastions, the intervening wall, and the entrance which opens in the center of the wall. As part of their defensive system, the Venetian separated the promontory from the rest of the city of Corfu by creating the Contrafossa, a moat which is a sea channel connecting the Gulf of Corfu to the north with Garitsa Bay to the south, turning the citadel into an artificial island. The moat is now filled with fishing boats that find shelter there. The land connection was achieved by a movable wooden bridge. In 1819 the British replaced this bridge with the present stable pathway which is 60 m long and stands 15 m above the ground. The structure includes a prison built in 1786 by the Venetians, the military Church of “Madonna of Carmini”, barracks and an old military hospital.

During the period of British rule (1814-1684), large scale interventions were made with the construction of new military buildings. In 1923 the Old and New Fortresses of Corfu were bombarded by the Italian Air Force and during World War II many of the buildings were destroyed including the Palace of Commissioner. Prior the end of World War II, the fortress was used from the Nazis to imprison the Jews of Corfu. Today the fortress houses the Public Library of Corfu, located in the old British barracks as well as the Hellenic Music Research Lab of the Ionian University. Its structures are also used for various types of art and culture events such as concerts and theatrical performances. The Old Fortress, the New Fortress, the Old Town of Corfu and the rest of the fortification of the Town are all Unesco World Heritage Monuments.

The entrance of the Old Fortress is placed in front of the Liston, near Corfu’s Esplanade. To visit it, you just have to cross the small bridge that links the fortress with the Town of Corfu. Apart from its historical and cultural value, the Old Fortress offers amazing views of Corfu and its surroundings. It also encloses another major highlight of Corfu Town, the Doric Church of St. George which was built by the Venetians, and utilized by the British during the occupation of the island in the 1800s. The church is the largest in the fortress and houses the General State Archives of Corfu. The fortress was the place of a scene from the James Bond film “For Your Eyes Only” in which the Mercedes, Emilie Locque, gets pushed off a cliff by Bond. Visiting the Old Fortress, is a must-do for first time visitors and a good place to start a tour of historic Corfu but try to arrive early to avoid crowds arriving from cruise ships. There is an admission fee for adults; children enter for free.