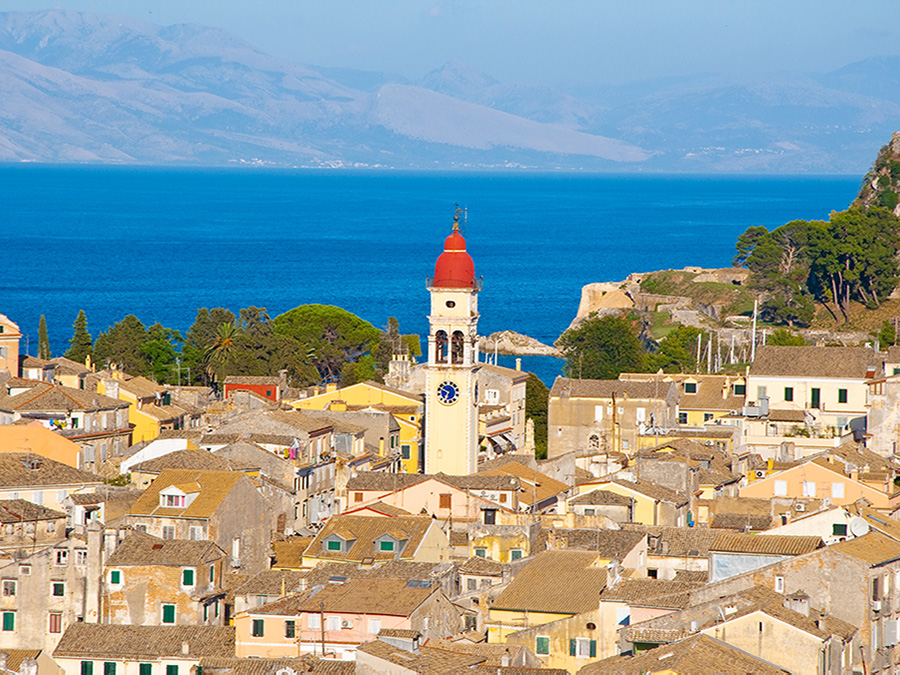 One of the most significant Byzantine monuments of Corfu and the most important pilgrimage of Christians is the church and the relic of Agios Spyridonas. It is located in the alleyways of the Old City, in the one called «alleyway of Agios Spyridonas» and you will easily find it, while entering from Liston  and Spianada.
The construction of the church was completed in 1589 and it was a founding church of the Voulgaris family which also had in its possession the relic of Agios Spyridonas.
A unique thing about Agios Spyridonas is that even though he is the patron saint of Corfu (his memory is celebrated with a litany four times a year), he had never been on the island, while he was alive. Agios Spyridonas was the bishop of Trimythounta in Cyprus, during the 4th century A.D.. Although he was a simple and uneducated man, as he was a shepherd before becoming a clergyman, he rapidly came to be loved by his flock, that made him a bishop. He also made an impression during his presence in the Ecumenical Council of Nicaea in 314 A.D., during the reign of Constantine the Great, in the Synod against Arianism. He was, according to the tradition of the church, the one who defeated the theory of Arius, forcing him to back down.
Spyridonas died in 358 A.D. and shortly after he was declared a Saint. His relic was moved to Constantinople when Cyprus was occupied by Saracens, until 1456, when after a great ordeal and while traversing the entire continental Greece, the Corfiot clergyman, Georgios Kalohairetis, took it to Corfu.
Through heirs and dowries, the relic of Agios Spyridonas came finally in the property of the Voulgari family, around 1520, where it remained until 1925. In 1528 the family built a church, especially for the relic of the Saint, in the suburb of Sarokko (Agios Rokkos), in Corfu, where it remained until 1577 when during the rebuilding of the New Fortress the church was demolished. The church of Agios Spyridonas was finally built in the alleyways of the Old City  in 1589 and still remains there.
The intact relic of Agios Spyridonas is one of the three in the Ionia Islands, along with the relic of Agios Gerasimos in Kefalonia and the relic of Agios Dionysios in Zakynthos.
It is a simple long and narrow church on the outside, of single aisled basilica rhythm, with an impressive frame made of marble in the gate. The bell-tower of Agios Spyridonas, which stands out in the narrow alleyways, is of castellated shape and was built in 1620. The tall, impressive iconostasis made of  Parian marble in 1864, while its 17 impressive roof paintings are works of art of the Corfiot artist Spyros Prosalentis or for others of Aspiotis and were created in 1852. These brocaded panels depict scenes from the life of the Saint and of the Gospels.
The silver shrine where the relic of Agios Spyridonas is held was made in 1867 in Vienna and today it is placed in a crypt.
The old iconostasis made of stone of Agios Spyridonas was moved to the church of Agios Georgios in the Old Fortress  of Corfu where, it is found today.
The Corfiots daily commemorate their «Saint», as there is no way of being on the island without hearing the expression «My Saint Spyridonas», with their familiar, singing folk speech.
The procession of the relic of the Saint occurs four times a year, none of which is the day that the church has set in memory of Agios Spyridonas: On Palm Sunday, as during that day in 1629, the prayers to the Saint saved the island from the plague, on Holy Saturday because in 1533, Agios Spyridonas saved the island from starvation, on the 11th of August, in memory of the repulsion of the Turkish siege in 1716 and finally, on the first Sunday of November, when Corfu was saved for the second time from plague, in 1673.

Agios Nikolaos of Geronton of Corfu

Agios Ioannis in the Old City of Corfu