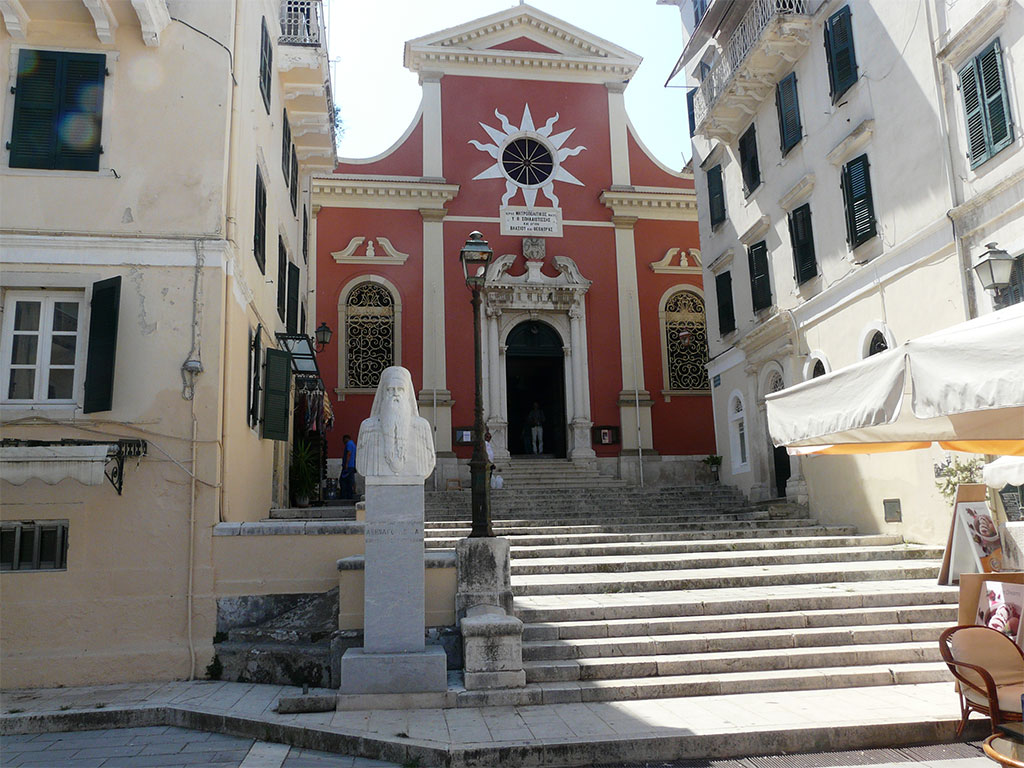 The Cathedral of Corfu is one of the most beautiful churches of the Old City. Hidden away in the labyrinth of the Corfiot alleyways, it is presented only to those that know how to look for it! The stairway made of marble in front of the entrance and the purple color of the façade of the Cathedral of Corfu will impress you as soon as you see it, in the region near the New Fortress and the port of the city. Built in a triple aisled basilica rhythm and with a renaissance style, it dates back to 1577. In the beginning, the Cathedral of Corfu was devoted to Agios Vlassios, while during the English rule to Panagia Spiliotissa, a name which is used until today for the church. From 1841 and afterwards it is the see of the Cathedral of Corfu, Paxoi and Diapontia Islands. Works of art by Michael Damaskinos (Panagia, Agios Georgios), the Lord’s Supper of Paramythiotis and Agios Govdelaas by Emmanouil Tzanes, decorate the magnificent interior of the church, with the most significant being the two-sided icon of Panagia Dimossiana which is the oldest one (15th century). In the Cathedral of Corfu the decapitated relic of Agia Theodora of Augusta is saved, which was moved there after the Fall of Constantinople, together with the relic of Agios Spyridonas, the patron saint of the island. Every year, on the first Sunday of Lent, a procession takes place in the alleyways, in the honor of Agia Theodora, who was empress and wife of the Byzantine Emperor Theophilos, during the iconoclasm. During the daytime, in commemoration of the miracle of Saint Vlassios, who healed the children of Corfu from lethal disease, a piece of watermelon is offered. The Cathedral of Corfu is still celebrated on the 11th of February (celebration of Agios Vlassios) and on the 15th of August.