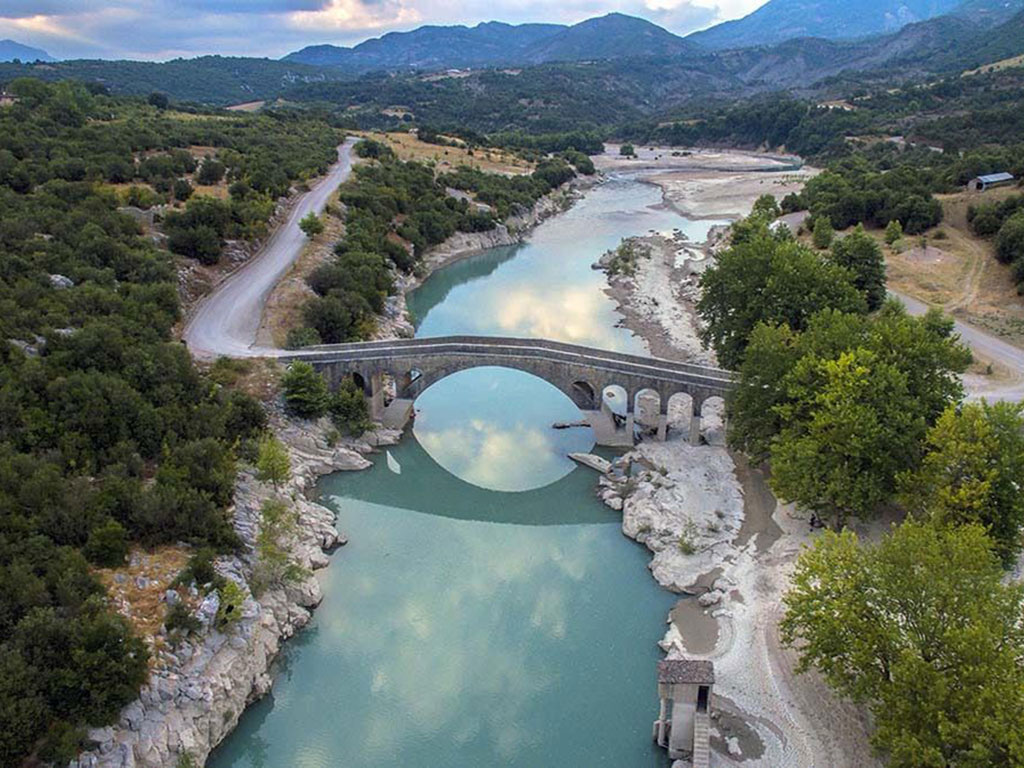 To the NW of N. Evritania on the river Acheloos, before the artificial lake of Kremasta, is the bridge of Tembla that connects N. Evritania with N. Etoloakarnania, and in particular the villages Topoliana of Evritania and Vruviana of Valtos.

In the past, there was a wooden structure from which the current bridge got its name. According to residents, it was built in 1909 by architect Ch. Kyrkos and by the Epirote craftsman Nikolaos Soulis, with funding from the politician of Valtos Nikolaos Stratos.
It is an impressive stone structure consisting of a large central arch that bridges the width of the riverbed and eight smaller asymmetrical relief arches placed on both sides. It has an imposing volume perfectly harmonized with its environment and remarkable construction and decorative details that compose a harmonious whole. The bridge is endangered due to vehicles crossing it.
History
At the risk of their lives, the residents of the area tried to cross, sometimes using ropes, sometimes with sticks and sometimes with rods, sometimes floating and sometimes aerial. In At Poros there was an old single-arched bridge which collapsed and the inhabitants of the surrounding area, in order to cross, placed a large trunk of a fir tree (Tembla) from which took the name that the bridge bears today, so 60-70 men gathered, climbed on the mountain and cut a huge fir tree as wide as the river at that point and set up a husky wooden bridge, which due to its color became known as the green bridge.
For a long time with this fir tree (Tembla), the long and relatively wide trunk, the problem was solved. From this trunk, that is, this fir tree (Tembla), it was named "Temba Bridge". In fact, the entire surrounding area has been named since then and remains known to this day as Tembla. Unfortunately, the calm and trouble-free passage of the river did not last long.
The interruption was marked by a very tragic event. As a shepherd, Fotis Matsioulas, was crossing the bridge over Evrytania to graze his flock, the wooden bridge broke and man and animals were found in the rushing waters of the Acheloos, which, during the month of December, descended with force. Fortunately, the lucky shepherd managed to escape, but lost most of his herd's animals.
So the stone bridge that was built later, continued to be called "of Tembla" and we can imagine it meant for the troubled place. It was considered, and not unjustly, a great and useful work, which managed to combine in the best way, the high technique with the unpretentious art. The bridge was the target of an explosion during the civil war by both rival camps. It has a large crack in its eastern flank after a failed explosion.