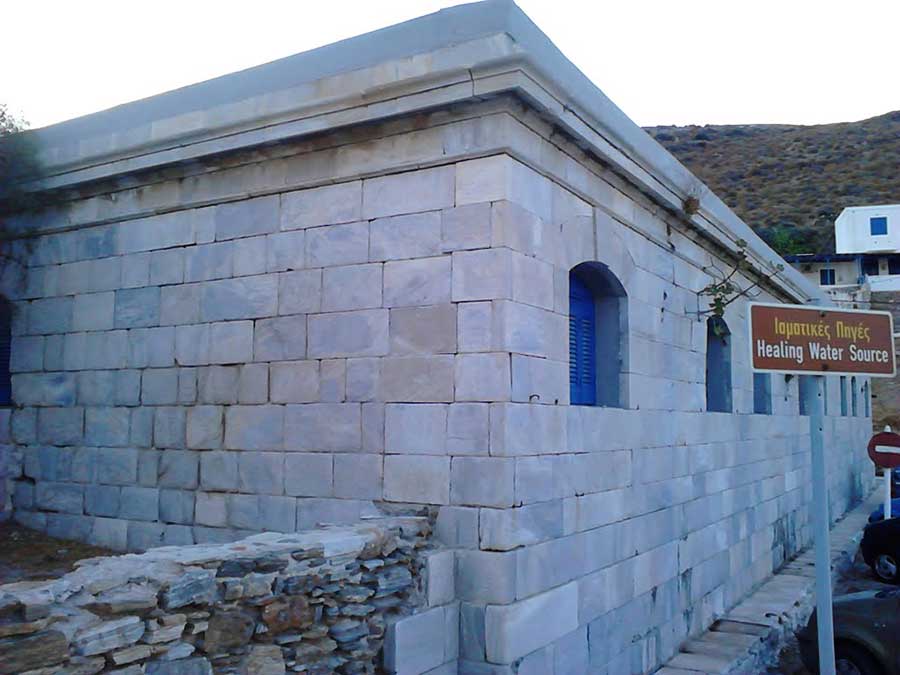 Kythnos belongs to the west Cyclades and is located between Kea and Serifos islands. It is also called Thermia due to its thermal springs located at the picturesque bay Loutra, at the northeast side of the island. You can access the island by boat from Piraeus (3 hours approximately) and from Lavrio (1 hour and 40 minutes, or 2.5 hours if the service includes Kea). Loutra is 15 kilometers away from Mericha port and 4 kilometers away from Chora. At Loutra there is also a marina for leisure boats.

Loutra that has been developed for tourism the past few decades, hosts the only Thermal Springs in Cyclades.

There are actually two thermal springs. The first one, Agii Anargyri, with a temperature of 38 Celsius degrees, is saline and is located in the adjacent old building.

The second one, called Kakavos, is located 50m away from the former, it has sodium iodide, sodium bromide, and sodium chloride, while its temperature reaches 52 Celsius degrees.

It is proven that the spring waters are recommended for the treatment of rheumatic, arthritic and gynecological conditions. Specifically, they enhance the treatment of diseases such as cervical syndrome, lower-back morbidity - ischialgia, neuritis, myositis, primary osteoarthritis (degenerative arthritis), chronic rheumatic diseases (ankylosing spondylitis) etc.

The Hydrotherapy Centre, which operates for four months every year (June - October), includes personal marble baths and a hydro massage. Each balneotherapy lasts about 20 minutes (only one hydrotherapy per day). There are special rates for the unemployed and for the island’s residents.

You must avoid balneotherapy if: