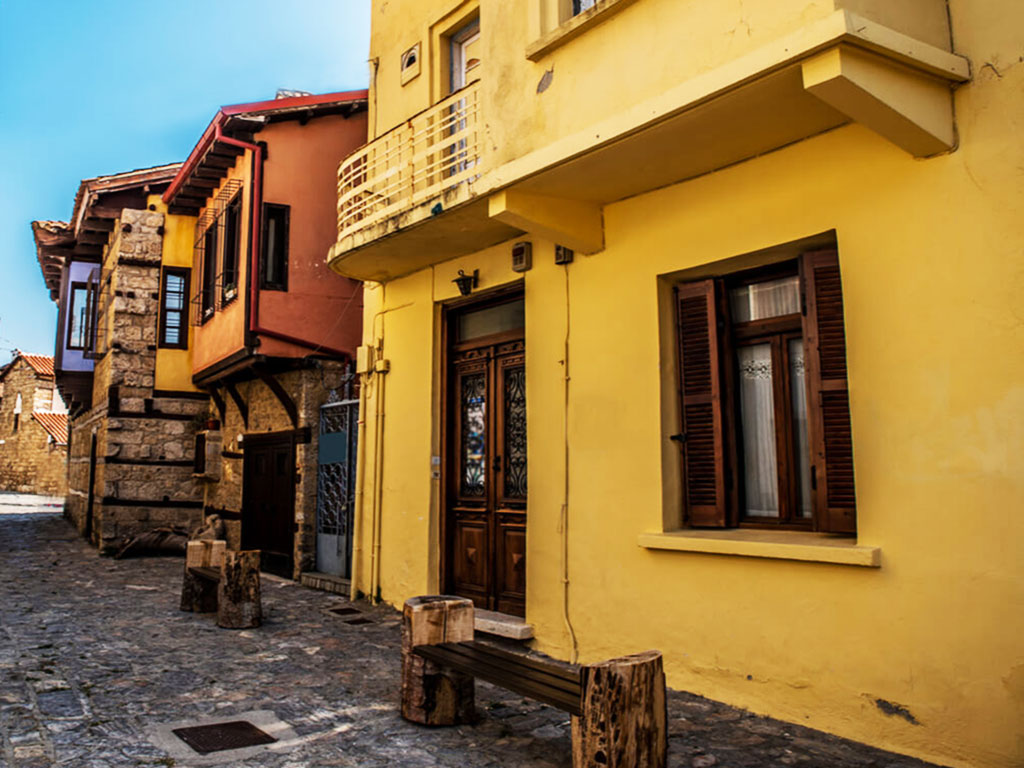 Edessa, formerly called Vodena or City of Waters, is a city in Macedonia and the capital of the prefecture of Pella. It is 541 km by road from Athens and 95 km from Thessaloniki. The city is famous for its waterfalls and is located on the ancient Egnatia Odos. Since 2004, the Edessa Carnival has been established, which takes place every year and the celebrations last for a week.
The name of Edessa from ancient times literally means "Tower in the water", because the city at that time had and has a strong wet element, rivers and waterfalls. The city was founded in 813 BC, with the name "Edessa", by the first Macedonian King, Heraclides Karanos and was the first capital of the Macedonian Kingdom. It had a rich industrial past during the interwar period. Later, when Edessa received a Slavic wave during the Ottoman Occupation, it was renamed "Vodena". This name continued to exist until 1912 when Edessa was liberated by the Greek Army. Since then the city is called "Edessa" until today.
The population of the city of Edessa is 18,229, while that of the enlarged Municipality of Edessa amounts to 28,814 inhabitants (2011 census). Also until the discovery of the Royal Tombs of Vergina in Imathia, by Manolis Andronikos many still believe that the Ancient Aigai are located in the Archaeological site of the city, based on the views of archaeologists.
Edessa is a city with many remarkable attractions. Its location is given to the Park of Waterfalls, which is drowned in green with small waterfalls and lakes. The most photographed part of the park is in Karanos, the largest waterfall, 70 meters high. Almost below Karano waterfall, there is a small cave with great geological value. The park is landscaped.  At its lowest point, are the facilities of the Open Air Museum, where you will see the old industrial zone of Edessa with period machinery. In the area of ​​the Open Air Museum, there is a small aquarium with endemic freshwater fish and reptiles. Next to the Museum, is the Varosi district, the Christian district of Edessa during the Turkish occupation with the restored colored houses and mansions, samples of Macedonian architecture. In the cobbled streets of the district you will find the Byzantine church of the Assumption of the Virgin with its remarkable iconostasis and the frescoes of 1380, as well as the church of Peter and Paul.
In a forest of plane trees, is the old railway station of the city built in 1893. Of the museums of the city, the Folklore Museum is special, where you will get a picture of Edessa of the 19th and 20th century, the era of economic and flourishing, but also the Museum of the Oikoumenikou Patriarchou Bartholomeou, with engravings even from the time of Gutenberg.
Other beautiful parts of the city are the Yeni Mosque, built in 1904 and preserved unchanged as well as the Clock of the city, which was made of cigar stone in the early 1900s but operated for the first time on the day of the liberation of the city, on 10/18/1912 . In the area of ​​Loggos, 3 km from Edessa, is the ancient Edessa. If you like hiking, you can get there in 20 minutes, following a traditional cobbled path that starts from the Water Museum, while in the location of Kioupri, there is a Byzantine Bridge, from where the ancient Egnatia Road is supposed to pass.
History
The city of Edessa has been inhabited since ancient times. In fact, before the discovery of the tombs of Vergina by Manolis Andronikos, Edessa was identified with the ancient Aigai, the first capital of the ancient Macedonian Kingdom. Today's Edessa is built on the citadel of the ancient city, while its ancient wall and part of its market have come to light. In Roman times, Edessa experienced great prosperity since the Egnatia Highway passed through it. In 250 AD, Edessa had its own mint, one of the nine operating in Macedonia during Roman times. The descent of the Slavs in the Balkans resulted in the loss of the name Edessa and the introduction of the name Bodena from the Slavic word (voda = water). From 985 to 995, Edessa was the capital of the Bulgarian kingdom, while during the Byzantine - Bulgarian wars, Emperor Basil II occupied it again.
In 1204 it was occupied by the Crusaders and in the period 1230-1252, the Despotate of Bodena was founded. It has been under Dusan's Serb occupation since 1345 and for 40 years. In 1395, an earthquake completely destroys the city. In 1782, the "Hellenic Museum", the first school of secondary education, was founded in Edessa. The participation of the city in the revolution of 1821, with great fighters such as Naum, Gatso and Troupko, was important. During the years 1892-1894, Edessa is connected by train with Thessaloniki, Veria, Florina and the Monastery. At the end of the 19th century, the water of the waterfalls was used as a free source of energy for the operation of textile factories, such as Tsitsis, Kannavourgio, Sefeko. Which implies the economic prosperity of the city, as Edessa together with Naoussa are the great powers of industry in Macedonia. So during the interwar period, it is called, "Manchester of the East or the Balkans".
On October 18, 1912, during the Balkan Wars, Edessa was liberated by the Greek army. During the years of occupation, the Germans set fire to half the city, destroying the Arrenagogio and the metropolitan church of Agii Anargyri, leaving behind thousands of homeless people. After the end of the civil war, the appearance of synthetic fabrics brought the decline of the Greek textile industry but also the decline of Edessa. A wave of internal and external migration follows. Today Edessa is experiencing a great tourist rise due to the Ski Center in Kaimaktsalan, but also the thermal springs in Loutraki Aridea, while the Varosi district and the waterfalls always charm the visitor.
View 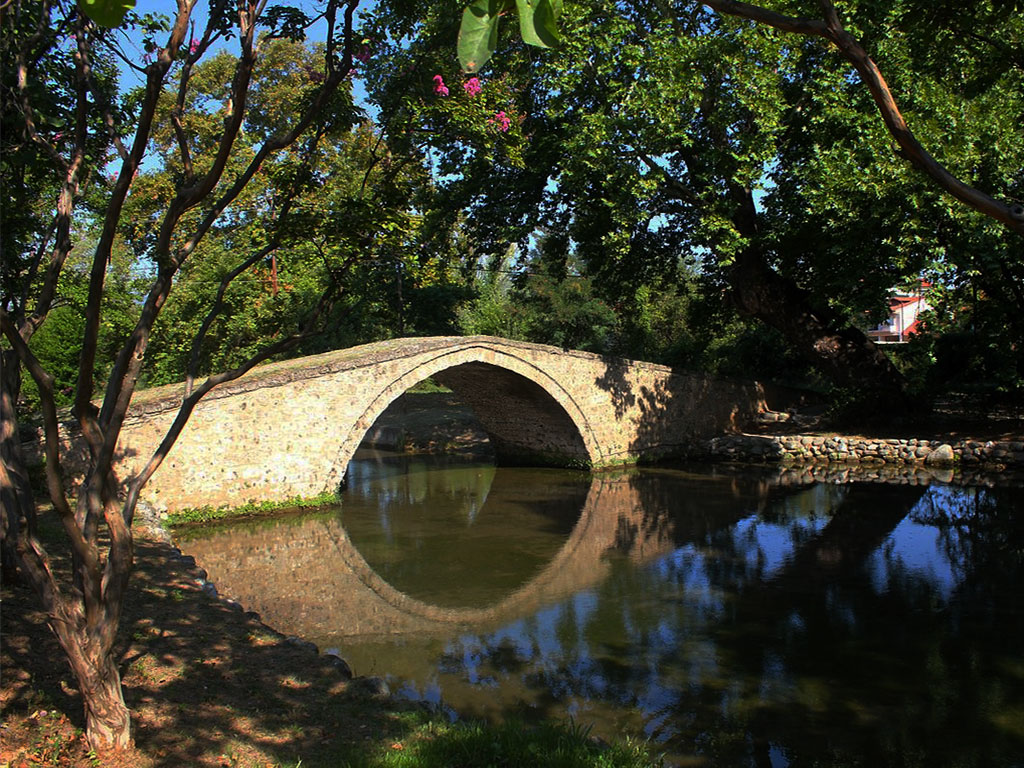 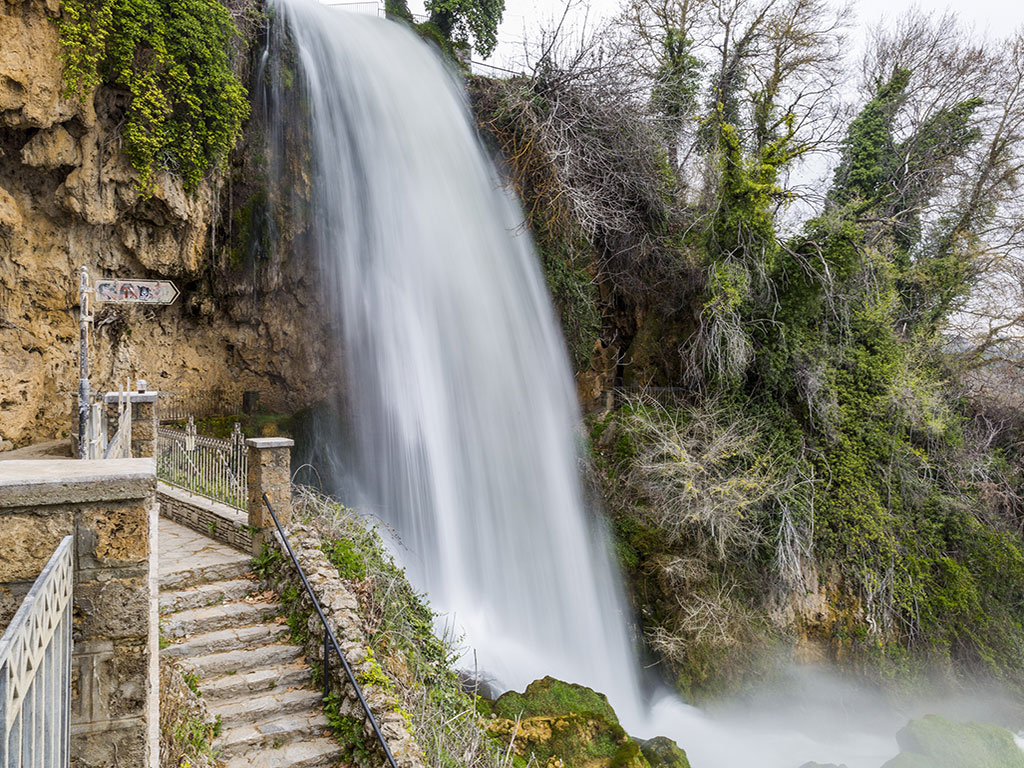