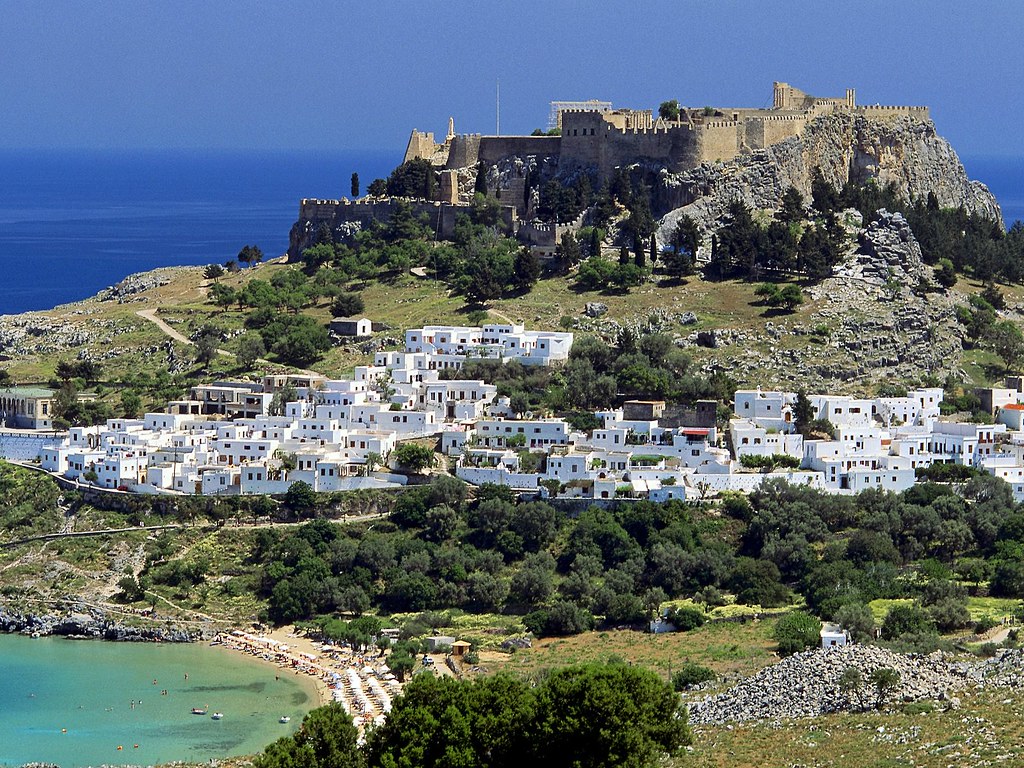 Lindos is a unique destination as it has a combination that most others lack: a maze of continuous buildings, chiefly with interior courtyards adorned with black-and-white pebble mosaics, narrow streets, sandy beaches, stunning turquoise waters, and an ancient acropolis topped with temple ruins. Lindos is one of the most popular places on the Greek island of Rhodes and undoubtedly one of a kind. Being one of the three most important ancient towns on the island and the one with the greatest naval tradition, no visit to Rhodes would be complete without exploring it.

It is located on a small peninsula, on the east coast of Rhodes, 50 km south of the capital city. Approaching Lindos, visitors are impressed by the view of the Acropolis enthroned above the picturesque village. The view from the top is astonishing. From the hill, you can admire the famous St. Paul’s Bay, which is one of the most characteristic places on the island of Rhodes, the endless blue of the Aegean Sea and the coastline. On the hilltop the remains of the medieval fortified citadel are still visible and within it the temple to Athena Lindia which dates back to the 6th century BC. The Acropolis of Lindos is ranked 3rd in visits among all the archaeological sites in Greece, fact that shows its great historical importance and how impressive it is, in terms of location.

At the foot of the Acropolis spreads the old town which has retained many original elements of traditional architecture. The village has perfectly preserved its character with white flat-roofed houses, a labyrinth of alleyways and mansions with coats of arms and engraved at the entrances their construction date. Most of the mansions belonged to captains of the 17th-18th century but now have been converted to luxury apartments, restaurants and cafes. In the middle of the central square stands a giant tree, watered by a fountain dating from the time of the knights.

One of the reasons Lindos is so popular is its beaches. Among them, St. Paul’s Bay with the quaint St. Paul’s Chapel, a really picturesque bay in the shadow of the acropolis. This chapel has inspired many couples in love, from all over the world to choose it for their wedding. It’s worth noting that Lindos town itself is pedestrianized and the only mode of transport are donkeys. Climbing to the Acropolis (116m above sea level) on a donkey, is a unique experience. Worth mentioning that the path leading to the temple is exactly the same path the ancients and knights once used. Lindos is also the place where some scenes from the famous hollywood movie "The Cannons of Navarone" were shot.

The village perfectly combines relaxation with entertainment, delicious local cuisine, emerald waters, culture and history. Hundreds of thousands of people from all over the world visit it every year to feel the unique atmosphere it offers. The most famous village of Rhodes has been listed as a traditional and preserved settlement by the Ministry of Culture, due to its unique architecture and historical character. Lindos along with Paleochora in Chania is one of the hottest places in Greece, with an average annual temperature of 21.4 ° C (2015).

Visiting Lindos is fairly easy. Regular buses run between Rhodes Town and the village all day long with the journey to take just over an hour. The best time to visit it is off season, that’s April, May, September and October, when the weather is still pleasant and Lindos not crowded with tourists.

The history of Lindos is lost in the depths of the centuries. Prehistoric finds testify the existence of life in the area since the Neolithic era. According to Greek mythology, Danaus, son of the King of Egypt, founded Lindos. Legend says, Danaus also built the Doric temple of Athena on the acropolis and put a statue of Athena there to worship. By the 8th century Lindos was a major trading center but its importance declined after the foundation of the city of Rhodes in the late 5th century BC. In the 6th century it was ruled by Cleobulus, one of the Seven Sages of Greece. Lindos is the birthplace of Charis, the sculptor who did the statue of Colossus in Rhodes known as one of the seven wonders of the ancient world, and of Panaitos, a philosopher who introduced Stoic philosophy to Rome. There is also one important liaison between Lindos and Christianity. The harbor took its name from the Apostle Paul who disembarked there during his visit to preach the message of Jesus.

Due to its great naval power, Lindos was the first to draw up a naval code of justice known as the Rhodian Naval Code. It is the first recorded code of Maritime Law, with provisions related to crews and their duties, violations of navigation rules and the corresponding penalties, contracts for the carriage of goods, maritime loans and insurance of valuables during their carriage as well as provisions concerning shipwreck and nautical accident issues. This code can even be found in the core of modern maritime law.

Sights
1. The Temple of Lindia Athena
2. The Triimiolia
3. The Ancient Theater
4. The Quadruple Building
5. The Archokratio
6. The Voukopion
7. The Tomb of Cleovulus
8. The Captain's Mansions
9. The Church of the Assumption
View 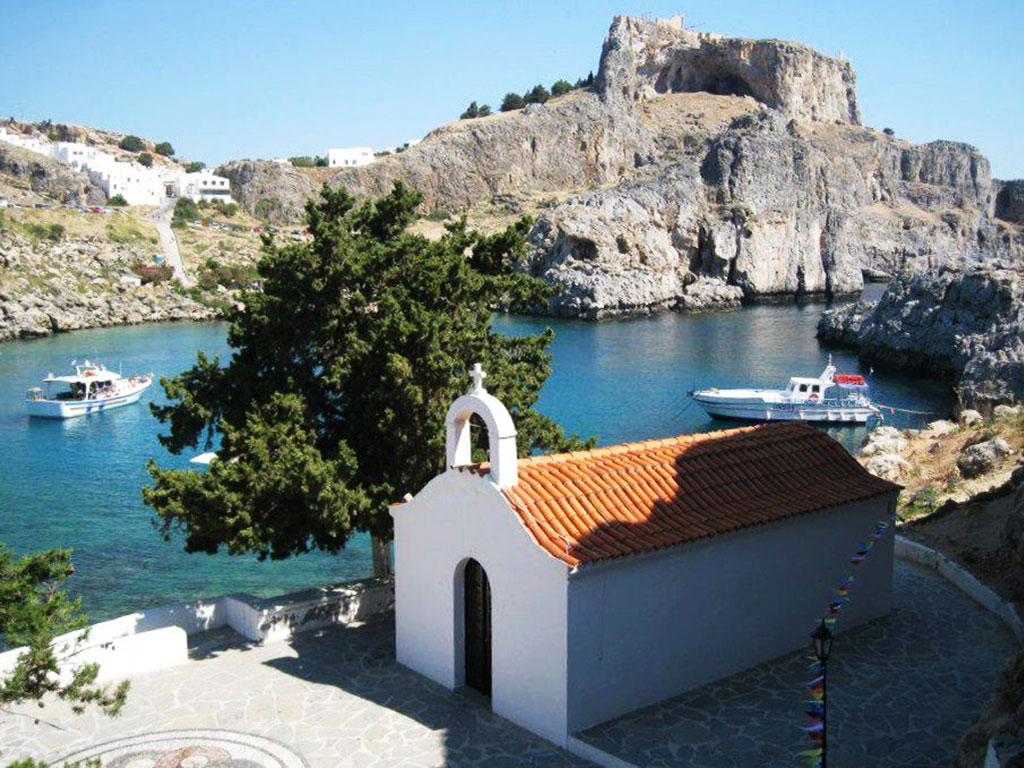 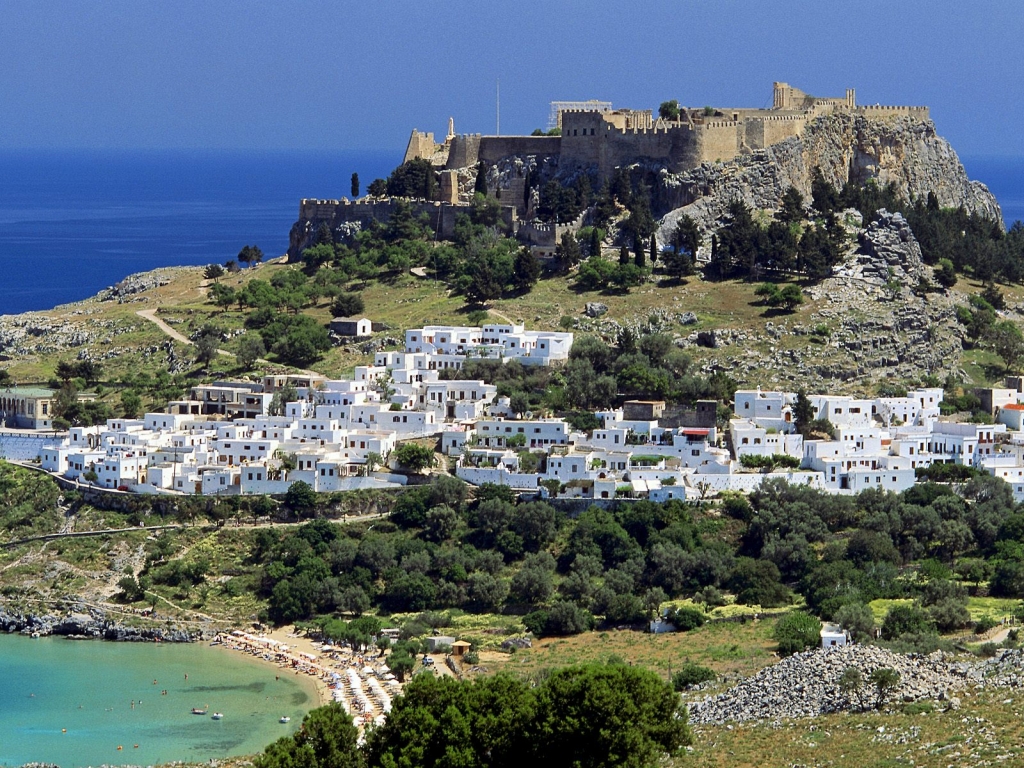 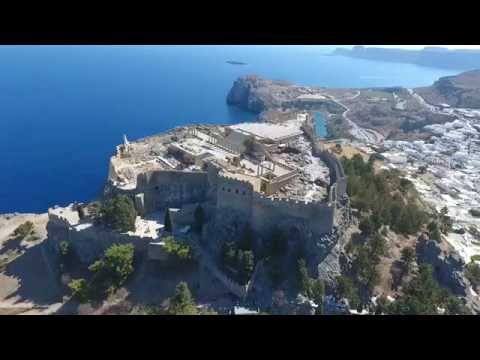