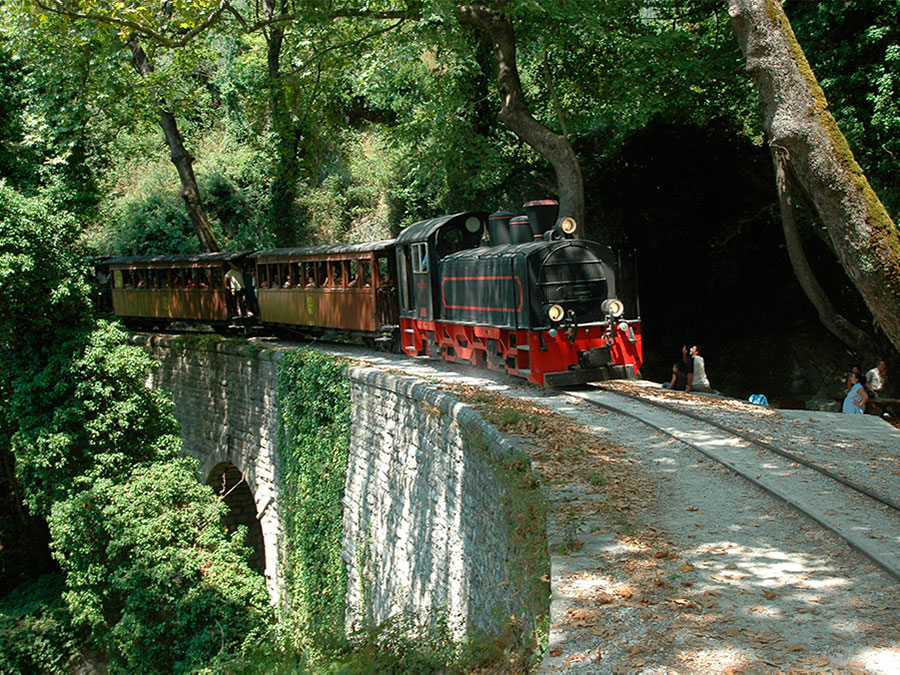 The little train’s whistle signals the beginning of an unforgettable trip. The ascent on the beautiful slopes of Mt. Pelion has begun, History is about to unfold.

This 60cm gauge line, one of the narrowest in the world, is home to the loco and the 4 cars of “Moutzouris”, a common Greek nickname reserved for someone who turns things black, an obvious choice in the days of steam.

The terrain between Ano Lehonia and Milies is mountainous, filled with lush vegetation, mainly consisting of plane trees, olives and pine trees.

The altitude gained allows for a spectacular view over Pagasitikos bay. Add to this the fact that the little train’s maximum speed is but a mere 20km/h and one can see why spectacular vistas over gorges, magnificent old bridges and tunnels are the order of the day, thus putting together all the jigsaw bits of this scenic route.

The train’s only intermediate stop is at the Ano Gatzea station from which it toils on to Milies and towards the completion of this 15km run in a total of about 90 minutes.

Up until Milies, the route is filled with natural beauty and features numerous architectural landmarks, especially constructions from carved stone and grey limestone that form arched bridges, tunnel entries and retaining walls, an exquisite sample of which is the five-arched stone bridge of Kalorema, in the area of Malaki.

On the final approach towards Milies, the scenery becomes more extreme, with the crossing of the steel bridge of Taxiarhis, also known as “De Chirico’s Bridge” being the highlight of this last section. Here, some pretty unique engineering is at work. This is a rare occasion where a train crosses a bridge that is straight, but the tracks that lie on it are actually curved!

At the end of the route lies Milies station. Traditional guesthouses and taverns await the visitors, while a cobbled stone footpath takes you up the village’s main square (about 15m). Here one can marvel at the chuch of Taxiarhes, which had been constructed before 1741 and the library which is one of the oldest in Greece or visit the museum of folk art. The next opportunity to admire the most scenic railway line in Greece is at 15:00 when the little train will start its descent towards Ano Lehonia.

The train normally operates from spring till autumn. During this period one cyclical trip is made in the mountainous part of the line, which is the only segment currently in operation. The running time is 1h 30m (including a 15m stop at the scenic station of Ano Gatzea, where coffee, local “tsipouro” and refreshments are available).

The station is situated 12km away from the city of Volos and is served by the Volos – Lehonia -Platanidia bus line, which runs on the road that heads for Kala Nera. One can also easily access the station by car as there is sufficient parking space right in front of the station building. Signposts of brown colour, clearly showing the direction in which the station lies can also be found on the main road.

The station can only be accessed by car and has limited parking space available. Signposts of brown colour, clearly showing the direction in which the station lies can be found on the main road towards Milies.

This historical train that used to operate the whole route between Volos and Milies is literally running on the tracks of history. Construction began in 1892 and in 1896 the first part of the line, namely until Ano Lehonia had been delivered. The rest, all the way up to Milies would have to wait for 1903. The chief engineer of the project was Evaristo De Chirico, father to the well know painter and sculptor Giorgio De Chirico, who was born in Volos. Little De Chirico was present during the construction works, observing this strange, new, means of transportation that was later to inspire him and take its place in many of his creations, usually in the form of a miniature train silhouette, half-hidden behind walls or arches, as seen through a child’s “spying” gaze into the adult world.

The little train of Pelion crosses the mythical routes of the Centaurs and the Dodecatheon as, according to the Ancient Greek Mythology, Pelion was the summer habitat of the twelve gods of Olympus.

Somewhere in the dense forest covering the slopes of Mt. Pelion, and in particular, where the R.R. Station of Milies is today, researchers place the site of the wedding between Pileas and Thetis (the parents of Ahcilles). Legend has is that the mythical battle involving the Centaurs and the Lapiths for the sake of beautiful Ippodameia also took place at this very site.

Deep in the gorge of Taxiarhis, on the last turn towards Milies, lies the cave of wise Centaur Heiron, a central figure in many ancient Greek myths, usually making his appearance as the tutor of Achilles. Heiron, who was a healer, had bestowed upon Achilles’s parents the spear which he later used in the Trojan War.

The cave of Heiron is exactly at the foot of the rock on which the chapel of Taxiarhis can be found today. It is said that inside that cave is the beginning of a path that connects this cave to a similar one in the area of Malaki or even further, to the hill of Goritsa, on the east side of the city of Volos.

Brochure of the Little Train of Pelion