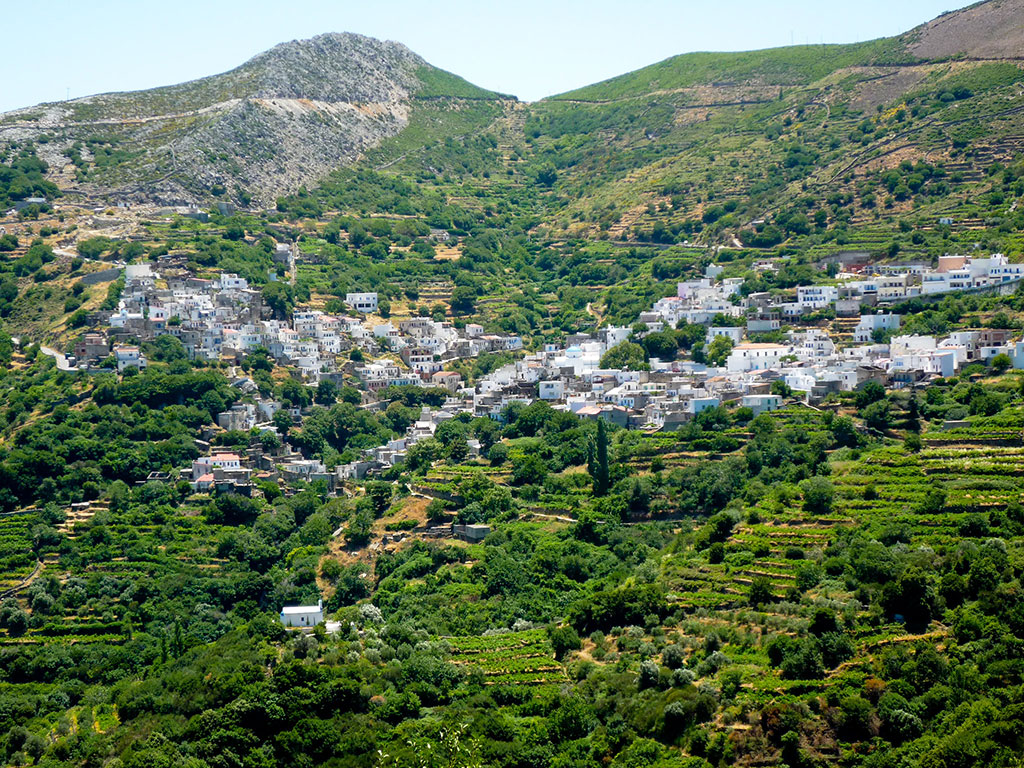 Koronos is a mountainous village on the island of Naxos, built amphitheatrically on the slopes of Mt Koronos and Mt Ammomaxi. It is one of the oldest and most quaint settlements in northeastern Naxos. It first appears in written records c.1200 AD. The village is divided into seven neighborhoods, connected with each other via labyrinthine cobbled streets and countless stairs. Almost all the neighborhoods have their own square and old water fountain.

The village experienced great growth before World War II, thanks to the emery mining industry. Parts of the aerial emery transport system from the Koronos mines to the loading port of Moutsouna, are still being preserved. Today Koronos is a rural village, with few tourist infrastructures but great architectural interest as the village has retained its traditional island architecture. The slopes around Koronos are covered with vineyards that produce excellent quality wine. Olive oil and other agricultural products are produced as well.

It is one of the most attractive destination of mountainous Naxos, with cobbled alleys, ornate arches, numerous stairs that connect the upper and lower neighborhoods, small Cycladic houses with old doors painted in bright colors and a small picturesque square, "the Platsa" as the locals call it, where you can find old cafes and tavernas under the arbor. The church of Agia Marina is the patron Saint of the village. It dates from the 9th-10th century and was renovated in 1747. In its paved courtyard stands a huge age-old plane tree that offers its shade to passers-by. A big celebration takes place on July, 17 (Santa Marina Day) and at the evening of the day before. Worth seeing is the monument of “The Fallen”, by the famous sculptor Armakolas, that was erected in honor of the executed residents of the village by the Nazis during World War II. Koronos has also a remarkable folklore museum, housed in a traditional guesthouse.

Due to its great architectural value, the village has been listed as a traditional protected settlement since 1988. Koronos lies approximately 30 km north east of Naxos Town and can be approached from three different junctions off the main road. West of Koronos, near the top of the homonymous mountain, at an altitude of 930 meters, can be found the Bad Cave, a place of worship of God Dionysus in antiquity.