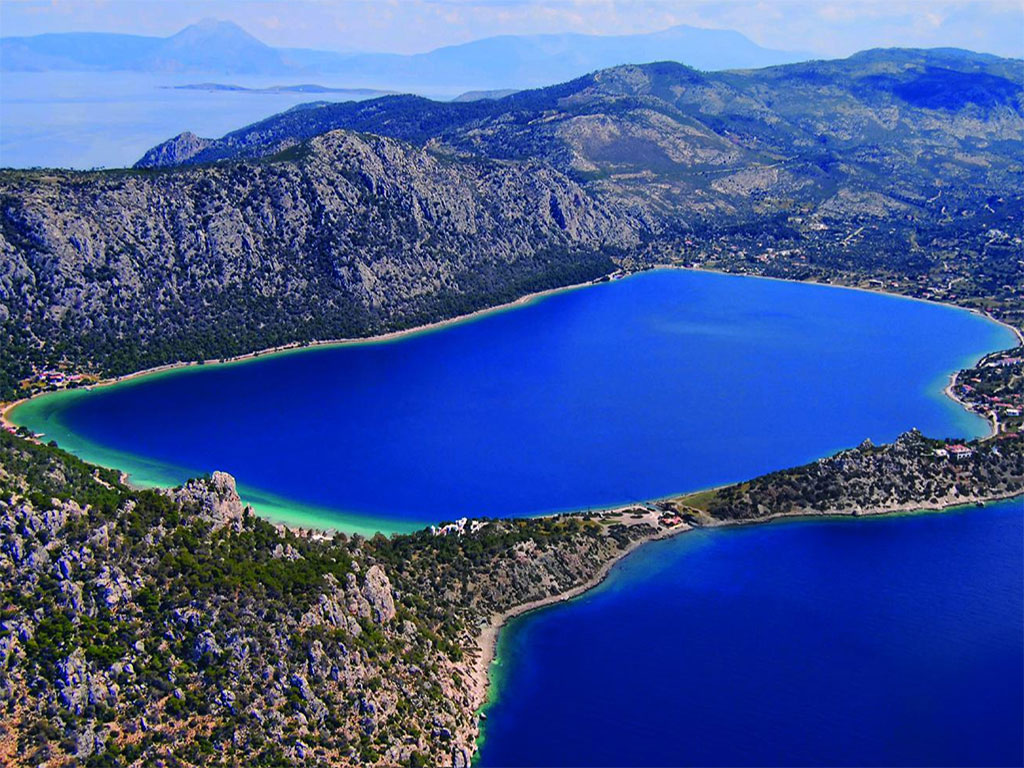 Vouliagmeni Lake also known as Ireon is located in Perachora, Loutraki, close ​​to the archeological site of Ireon. It is 16 kilometers from Loutraki, in a verdant area, at the foot of the Gerania mountains. ​Although it is called lake, it is actually a lagoon with very salty water.

Its has an oval shape, a maximum length of 2 km, and a maximum width of about 1 km, while its depth does not exceed 40 meters. On its western banks it has a beach with fine white sand. Its crystal clear, transparent and serene turquoise waters are ideal for swimming and fishing.

The lagoon communicates with the waters of the Corinth Gulf through a very narrow canal whose width does not exceed 6 meters. The sea enters through this canal into the lake with momentum, forming a vortex. It seems that there is an underground tunnel there that collects water. The sea descends into the lake like a river, draining tons of water. Its waters, much saltier than the water of open sea, are renewed with the phenomenon of tide and low tide every six hours. Initially are shallow, while then deepen abruptly.

In ancient times it was called Eschatiotis but also Gorgopis, a name taken from Gorgi the daughter of Megareas who drowned in the lake. According to tradition, in this place there was an underground cave that sank, and in its place was formed the existing lake. The temperature of the water is constant throughout the year.

Others believe that Lake Ireon was named after the archeological temple dedicated to the goddess Hera, about a kilometer west. Traces of human settlement of the Early Helladic period have been found in the area near the narrow canal of the lake, a sign that the area has been inhabited since the 3rd millennium BC.