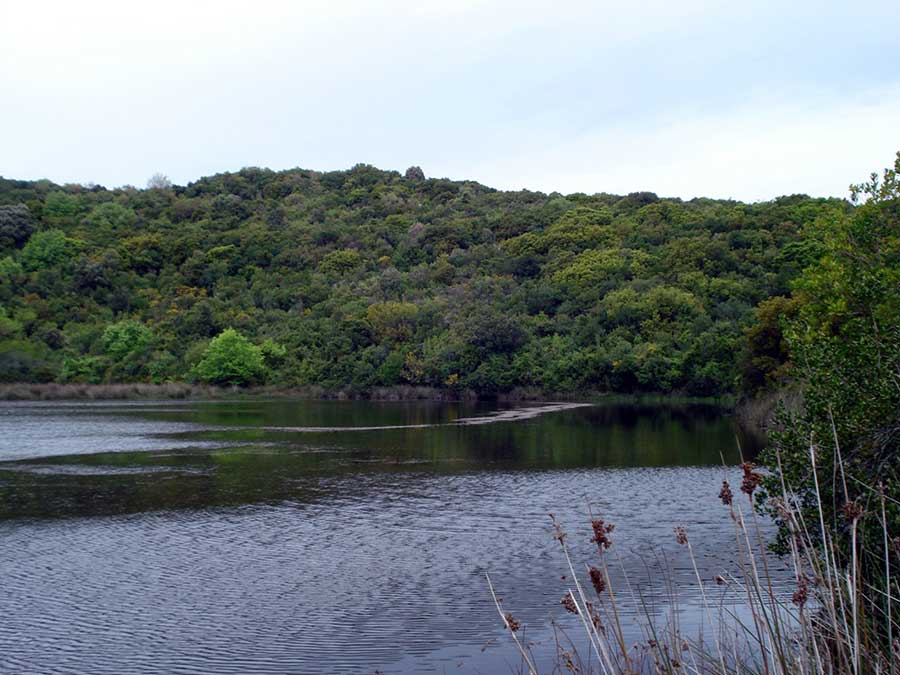 Lake Akoli is located approximately 1.2 km north - northeast of the settlement of Agios Stefanos in Corfu.
Marsh Erimitis and Vromolimni have been recorded under the name "Barbara Lagoon or Avlaki & Ag. Stephanos".
It is a small coastal lake in front of which stretches a magnificent beach. It is located in an area not accessible by road and therefore is in excellent conservation status. Access to Lake Akoli is possible through a path that starts from Agios Stefanos Sinias or Avlaki beach to the west or by boat.

The wetland has no apparent connection to the sea but the water is brackish indicating strong interaction. The lake, at the time of the Venetian occupation, joined the sea with a small open canal and may have functioned in the past as a fish farm.

To the east, a narrow and full of cobblestone beach separates it from the sea while the other sides are overgrown with dense and bushy vegetation of the semi-mountainous bulk of the Erimitis.

The dominant vegetation in the lake is the Ruppia maritima, which covers the largest surface. A relatively strong presence is the Typha sp. on the west bank of the lake, while the wetland vegetation is supplemented by Juncus sp., Scirpus sp., and Phragmites australis, Arundo sp. As for the fauna there are fish, amphipods, snails while the presence of a otter has been recorded in the area.
Akoli is considered one of the most important ecosystems of the island.

One of the three lakes of the region Erimitis in Kassiopi  of Corfu, Akoliis considered a significant ecosystem of the island. The wetland, besides its rare beauty, due to the verdant nature surrounding it, while next to it is the sea, gathers multiple species of avifauna that prefer it as a stop during their migratory journey.

In the past, Akoli was united with the sea by a small, open water channel from the period of the Venetian occupation, its marks are still visible even today. This construction allowed the movement of fish when the fish pond was in operation.

Akoli is a lake situated more towards the north compared to the rest and in front of it extends an enchanting beach. Access to Akoli Lake is possible through a trail  which begins from Agios Stefanos in Sinies  or by the beach of Avlaki  in the west or by sea with a boat.