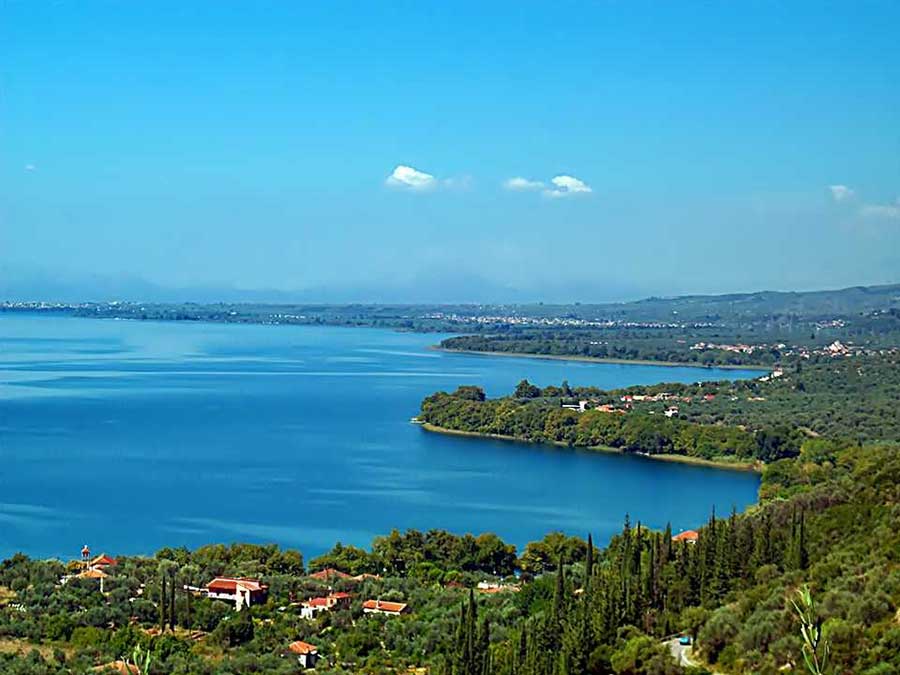 In the West Central Greece, in the southern part of Aitoloakarnania is Trichonida lake (or Apokoros), the largest, more picturesque but relatively unknown lake of Greece.

It is located at the draft between the mountains of Panetoliko and Arakinthos, and receives the waters from the water currents of these mountains, as is the neighboring Lysimachia, from which separates a 2 km wide strip of land. The excess waters of Trichonida are channeled into the Lysimachia and from there with a canal in Acheloos river. It has an elongated shape and arched and low banks. Its surface area is 96 square meters km, is the country's first largest lake with an average of 18 meters. It has a length of 20 km, and its greatest depth reaches about 57 meters.

To the east, the morphological slope of the mountains is great and the shores are steep, while the rest of the terrain has a smooth end, resulting in many places, and in combination with the large size of the lake, the coast reminiscent of seashores. Around it there are 6 municipalities with a total population of over 30.000 inhabitants.

The phytoplankton of the lake includes 90 species, some of which are unique in the world. The lush vegetation in Trichonida is made up of centuries-old plane trees and other kind of trees. Just above the lake, just outside Petrochori, there is still a fairly large oak forest residue. In the area there are also rare flowers such as water lilies, cyclamen, gladiolus and many orchids.

Its animal population is made up of many species of fish. In the waters of the streams, mainly in their estuaries, there are also several fish. It is estimated that the catch of fish exceeds 350 tonnes per year. The bird fauna of the lake is very interesting. More than 140 bird species have been observed. Of these, the 30 species - at least - belong to threatened and strictly protected by Community legislation. Around it also live otters, amphibians, reptiles and others, of which the otter is most interesting, as well as a number of insects.

Trichonida now belongs to the Natura 2000 areas. The inflowing quantities of water come from sources, mainly underground, and from 15 large and several smaller torrents, which start from Panetoliko and Arakinthos and end up in the lake. The amount of water comes from the drainage of the area of ​​Panetolio - Kenourgio, using irrigation water from Acheloos.

The creation of the lake was the result of major geological redevelopments. Trichonida is a remnant of an older and larger lake that occupied the entire Agrinian basin prehistorically. The above procedure is estimated to have taken place about 15-20 million years ago.

According to tradition, in ancient times there was in the lake a sunken city. This city had three cones and maybe from there the lake was named: Three cones, Trichonida. Another version, probably the most prevalent, is that it took its name from the ancient city of Trichonio, located next to the lake, near the village of Gavalou.