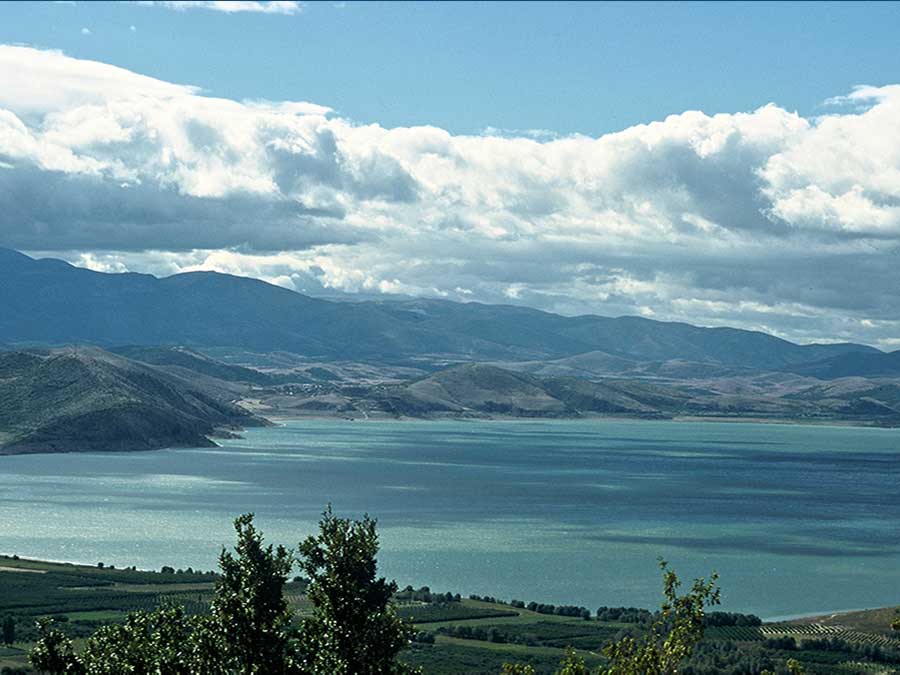 One of the largest natural lakes in our country, Vegoritida, although it has undergone significant alterations from human activities, is still one of the most important bird species in Northern Greece. Vegoritida is also referred to as Ostrovo Lake, while its other three names are Arnissa Lake, Kelly Lake and St. Panteleimon Lake. It is located at the border of the prefectures of Pella, Florina and Kozani and is surrounded by the mountains Voras in the north, Vermio in the east, Skopos to the south and Askios to the west, while only 2,5 km to the east is Petron Lake. Vegoritida is the lowest point of the Zazaris, Cheimaditida and Petron lake complex, which is supplied with water through a canal and canal system, and there are four large streams: the Faraggi, Pentavrysos, Agios Athanasios and Arnissa. The river basin of ​​the lake reaches 911 sq. Km. Its direction is from the north-east to the south-west with a length of 12.5 km and a width of 5.5 km, while it is at an altitude of 512 m. In the past it covered an area of ​​68.000 acres and was the deepest lake of Greece with a depth that reached 75 m. But over the years the waters have diminished and now extends to an area of ​​44.300 acres with a maximum depth of 70 m. On the shores of the lake are two large communities: Arnissa and Agios Panteleimonas, while around it there are the villages of Faraggi, Maniaki, Vegoras, Perea, Drosia, Xanthogeia and Agios Athanasios. Vegoritida, along with its nearby lakes, is what is left of the vast lake of Eordea, the extent of which was one million acres and its depth.

Previously, the hills around the lake were covered with dense forests of Macedonian oak, but over time the forests were deforested and today the oaks are found in only a few places. Of particular interest are the aquatic vegetation with important species such as vallisneria spiralis, najas marina, ceratophyllum demersum, myriophyllum spicatum, polygonum amphibium, carex acuta, typha angustifolia, schoenoplextus pectinatus, zannichelia palustris, lemna trisulca, potamogeton pectinatus, p. perfoliatus, chara hispida, utricularia vulgaris. Dwarfed reeds of phragmites australis are growing at different points, while in the southwest, Vegoritida reaches wet meadows, very important ecosystems for the birds and fish of the lake. In the bare limestone hills there are species such as allium guttatum sardoum, dianthus deltoides, sedum cepaea, silene fabarioides, centaurea grisebachii, crocus cancellatus and ophrys mammosa. Vegoritida is an important biotope for many bird species and together with Petron Lake is an almost unified ecosystem. In the area, 162 species of birds have been recorded, of which 87 are nesting. Many rare species live in the lake. It should also be noted that the size of Vegoritida allows for the migration of thousands of birds, especially when the other lakes in the area are frozen.

There are several otters in the lake. The fauna is supplemented by the occasional presence of the wolf and the bear and other mammals such as wild boar, badger, ferret, fox, hare and hedgehog. Significant is the presence of many rare lepidoptera, such as agrodiaetus admetus, agrodiaetus ripartii, leptidea duponcheli, freyeria terrochylus, strymonidia pruni, and pieris ergane. In the lake, among other molluscs, two rare have been recorded,the marstoniopsis graeca and the graecoanatolica vegorriticola. 20 species of fish have been recorded in Vegoritida, including cyprinus caprio, silurus glanis, alburnus thessalicus, barbus balcanicus, carassius gibelio, Anguilla anguilla, esox lucius, gobio bulgaricus, pachychilon macedonicum, rhodeus meridionalis, rutilus rutilus, scardinius erythrophthalmus, tinca tinca and squalius vardarensis. Coregonus sp., oncorhynchus kisutch, oncorhynchus mykiss and salvelinus fontinalis have been introduced into the lake. Significant is the presence in the deepest waters of the astacus fluviatilis.