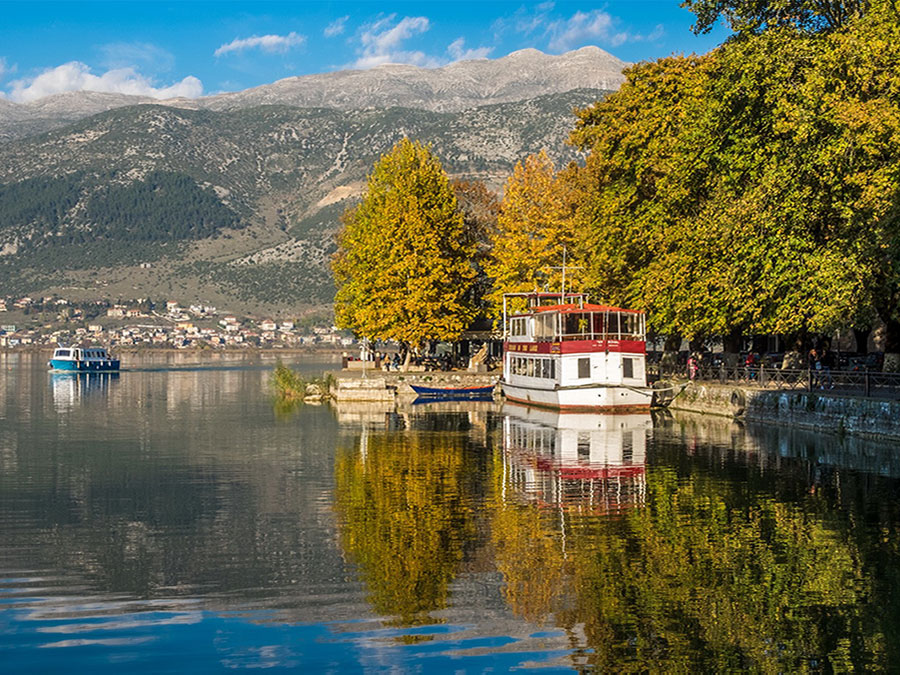 Lake Pamvotida is commonly known also as Lake of Ioannina is the largest lake of Epirus, located in the central part of Ioannina.

This well-known lake was in ancient times known as “Pamvotis” (the great provider) and features small fishing ports and a boating port.On the shores of the lake is located the fish-breeding station of the Municipal Operation of Lake Ioannina, where some quantities of Greek caviar from sturgeons of Russian origin are produced. The lake has two main features: a dream-like peninsula with its historic castle and towering minarets and the small island – the only island in Greece to be inhabited and yet not have a name – which basks in its green waters. The legend says that in the lake, Kyra Frosini was famously executed by drowning, alongside 16 other women, for adultery on the order of the Ottoman governor, Ali Pasha of Ioannina.

There is a regular boat service to the Ioannina Island. The Lake offers perfect conditions for water skiing, rowing and canoeing, as the wind in the area is usually very favorable. The Greek National Road 6, surrounds the northern half of the lake. The lake is fed by several small rivers. The lake is supplied by the springs of Mount Mitsikeli, of Drabatova, Sendeniko and Krya. There are thick reed beds around the lakeside as well as dense thickets of willows, poplar trees and huge plane trees which offer shelter from the wind to a host of local and immigrational birds. Herons, grebe, snipe, swans and cormorants all “earn their daily bread” by snacking on the local fish population. There are 9 amphibians and 24 reptiles in the lake. Of these, the most important are the Triturus carnifex, the Salamander, the Yellowfish, the Treefrog, the European Frog, the Grasshopper, the Common Wharf, the Sea Turtle, the Mediterranean Turtle, the Waterfowl and the Lakefisher.

Many species of mammals have been recorded in the basin of the lake: foxes, ferrets, hares, hedgehogs. Occasional is the appearance of wolves and wild cats, while the presence of the otter, which previously lived by dozens in the area, has now been greatly reduced. There are 24 species of fish in the lake, of which many are listed and unfortunately have displaced native species of Pamvotis.