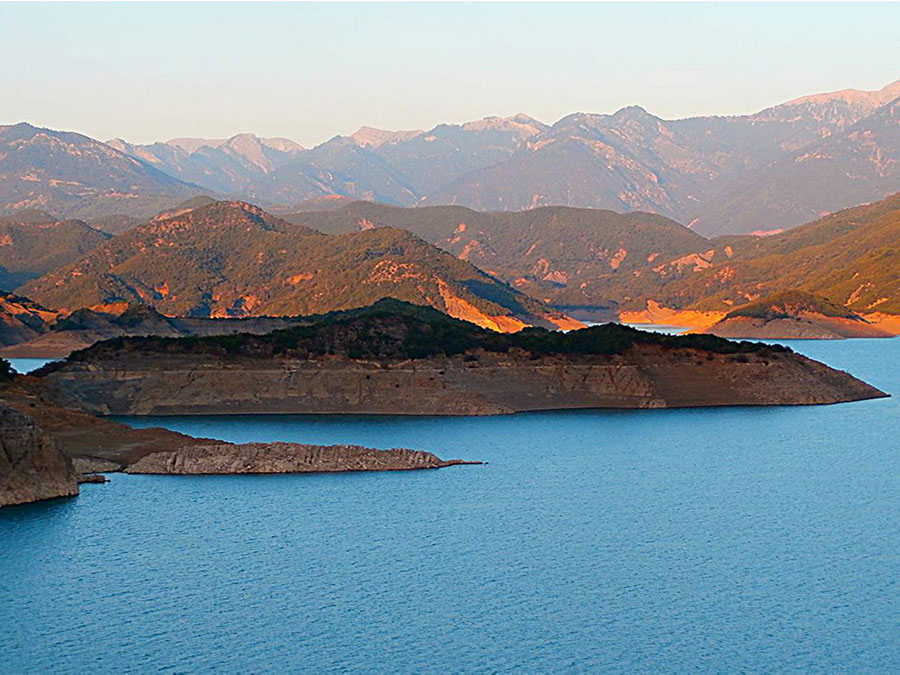 Lake Kremaston is the largest artificial lake in Greece. It is located between the prefectures of Aitoloakarnania and Evritania, which are joined by the Bridge Episkopi. At another point, there is also the Tartanas Bridge near the homonym monastery. The lake was created after the construction of the Kremaston dam and the accumulation of the water bodies of the Acheloos, Agrafiotis, Tavropos and Trikeriotis rivers.

Lake Kremaston is perhaps the most beautiful artificial lake in Greece. The unrivaled beauty of the lake with the turquoise waters, the fjords that are created and the numerous small islands that are scattered, will truly enchant you and make you think you are in an exotic destination. In the lake you can try various sporting activities such as canoe-kayak and rafting.

Kremaston Dam is one of Europe's largest seashores and its construction works began in 1962 and were completed in 1966 with the operation of the station. At the base of the dam is the Kremasta Hydroelectric Station, one of the country's most important technical projects, which ensures significant amounts of electricity. The lake's waters are led through four pipelines to the station's four turbines and thus electricity is generated. The dam was constructed in a narrow point of the Acheloos bed, where the folk tradition states that the legendary Katsantonis jumped from one bank to the other, as the Turks hunted him, and that is why the location is called "Katsantonis' jump".

The creation of the lake has resulted in increasing biodiversity and improving the climatic conditions of the area. The site is part of the Natura 2000 program because it has a large and sometimes rare biodiversity of fish, reptiles, birds and mammals. The area is often visited by large predators, such as sturgeons, petrites, rockers and owls. The fish pond of the lake includes various species of large rivers that flow into it. These include the Carassius gibelio, Cyprinus carpio, Barbet peloponnesius, Ctenopharyngodon idella, Hypophthalmichthys molitrix. Around it the predominant species of flora are: coumaria and the koutsoupia, while from the large trees one can see several oaks, a few chestnuts, maples and plane trees.