Lake Zazari is an important wetland in Northern Greece, included in the Natura 2000 network as a special protected area. The lake is one of the four lakes situated on the Amyntaio plateau; the other three are Lake Vegoritida, Lake Cheimaditida and Lake Petron. Lakes Zazari and Cheimaditida are connected hydrologically, by a channel constructed to allow water to flow from Lake Zazari to Lake Cheimaditida. Situated at an altitude of over 600 meters, Lake Zazari covers an area of 2 square kilometers and has a maximum depth of 6,4 meters but its water level reduces by almost 1,20 meters during the irrigation period.

This scenic lake is filled by the Sklithros stream which flows down from Mount Verno, and often freezes during the winter months creating an idyllic landscape.  Many claim that It is one of the most beautiful lakes in Greece and a paradise for bird watching enthusiasts. Herons, long-legged buzzards, golden and white-tailed and more than 140 other species of birds have been listed here. Moreover, many species of amphibians live in its waters as well as several species of fish such as carps and pikes. Around the lake, there is an extensive network of forest paths, ideal for horse riding, walking, cycling and hiking. On its bank, sits Limnochori, a very picturesque lakeside village with a couple of tavernas serving good traditional food. Wooden tables with benches have been placed by the water for those who want to picnic. Lake Zazari is 195 km away from Thessaloniki and 43 km away from Florina and getting there is rather easy. 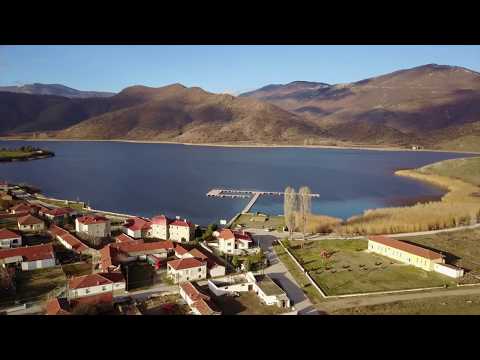