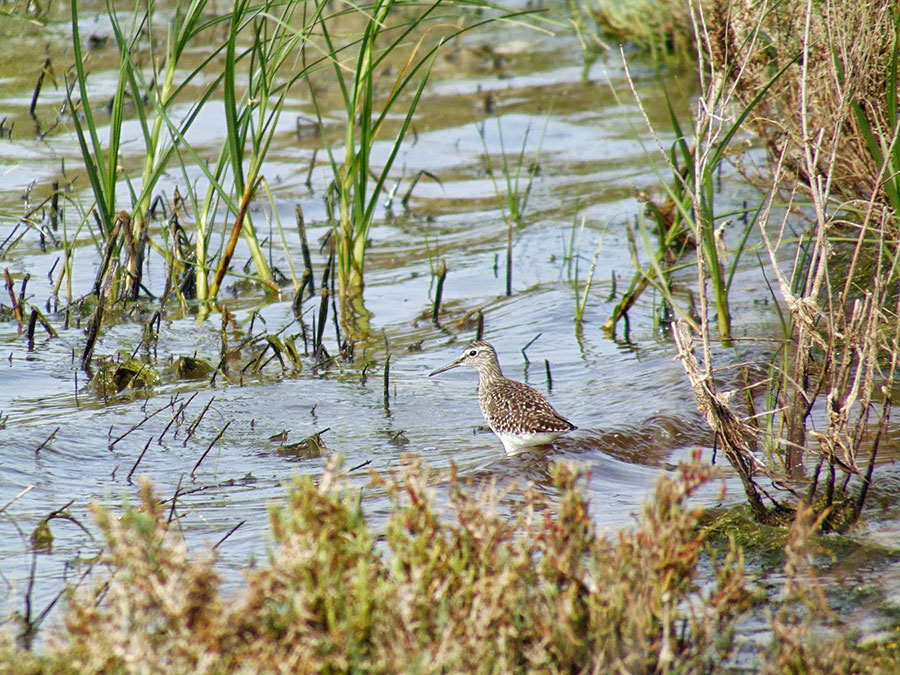 Alyki of Naxos is the largest and most important coastal wetland of the Cyclades, because of the rarity of birds that find temporary or permanent shelter in its waters. It is a big lagoon located just 2.5 km south of Naxos Town.

Historically, the lagoon has been a salt mine for many centuries, called "taliani", which meant a farm of fish in Turkish.

Alyki is a complex of different habitats spread over an area of ​​950 acres, of which 800 cover the lagoon and the remaining 150 are the peripheral areas affected by it. It is located at the end of the bay of Agios Georgios and borders on the west with the hill Stelida and Cape Mugri. The sea area to the north is called Lagouna and is characterized by the presence of the Mando islet that has now been transformed into a marsh, but also by the presence of the rocky islands of Kleftonisia. To the east, the airport of Naxos has been constructed and in the south begins the plain of Livadi and the fields with the crops. At the southwest and at only 650 meters are the three seasonal wetlands of Agios Prokopios.

Alyki of Naxos remains a wonderful wetland that combines the presence of several different habitats. It is characterized by a large shallow area of ​​brackish waters, small bays with reefs, shallow estuary adjacent to sand dunes, saltwater marshes, sandy beaches and lagoons, marsh and rush meadows, seasonal water streams and rocks. Previously Alyki was a single wetland that freely communicated with the sea, but later it was built an artificial mound that closed the waters and nowadays only one ditch connects the fresh waters with the sea.
In 1985, Alyki was cut in almost two parts to construct Naxos airport, although previously the first projects for an airport, in the north, were made in Sangri. So the wetland over the years lost its virgin physiognomy. Today the communication with the sea is limited, with the result that the bulk of the water consists of the seasonal rain waters of Mount Za. So the lagoon almost empties from water between August and October.
The vegetation consists of a variety of species. Approximately 80 species of plants have been recorded in the surrounding area.The most importants are:
Juniperus macrocarpa, Althenia filiformis, Limonium hirsuticalyx, Cressa cretica, Calystegia soldanella, Asplenium obovatum, Anthemis rigida subsp rigida, Enarthrocarpus arcuatus, Silene sartorii, Paronychia argentea, Malcolmia nana, Arthrocnemum macrostachyum, Medicago ciliaris, Muscari cycladicum, Juncus littoralis, Limonium aegaeum, Ranunculus peltatus subsp peltatus, Ruppia cirrhosa, Zannichellia palustris Halimione portulacoides, Halocnemum strobilaceum, Bolboschoenus maritimus, Cyperus capitatus, Schoenoplectus litoralis, Euphorbia paralias, Triglochin barrelier, Atriplex halimus, Anogramma leptophylla, Astragalus boeticus, Mesembryanthemum nodiflorum, Equisetum ramosissimum, Pancratium maritimum, Bupleurum semicompositum, Crithmum maritimum, Eryngium maritimum, Pseudorlaya pumila, Carlina corymbosa subsp graeca, Cichorium spinosum, Echinops spinosissimus subsp spinosissimus, Achillea maritima, Anchusa undulata subsp hybrida, Myosotis litoralis, Alyssum umbellatum, Cakile maritima subsp maritima, Malcolmia flexuosa subsp naxensis, Salsola tragus and the Glaucium flavum.
Aliki of Naxos is a major wetland for migratory species. Each year it attracts large numbers of birds that find the right place to rest, feed or nest. More than 120 bird species have been recorded in the area. In the spring the waters of Alyki are filled with all kinds of ducks.
Also there are many species of frogs, reptiles, turtles such as careta careta, mammals and fishes.