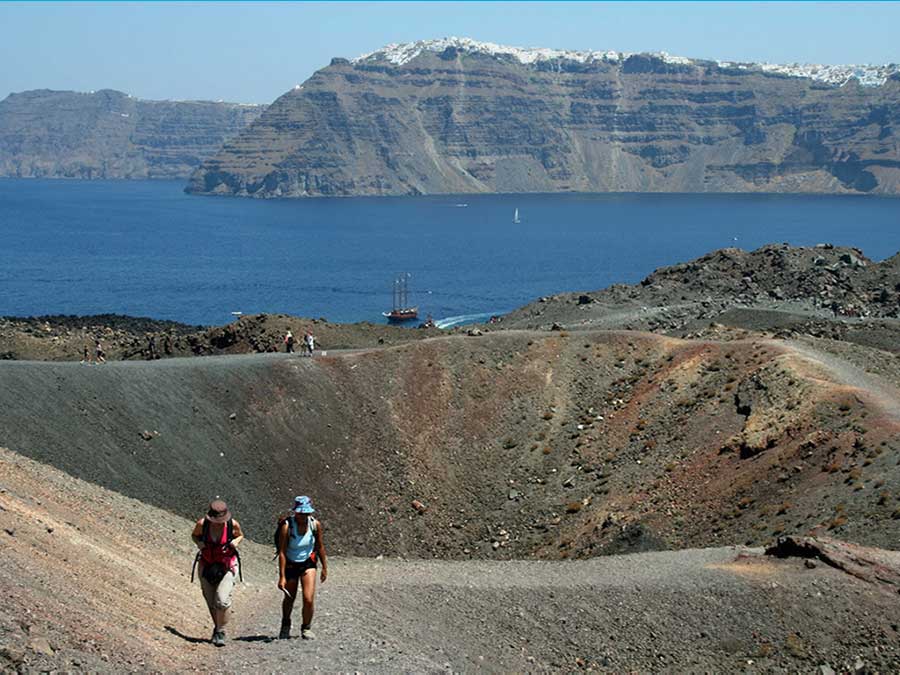 Santorini, is unlike any other island in the whole world and it owns this uniqueness primarily to the volcano of the island. This is one of the most important volcanoes worldwide and it attracts dozens of scientists who visit the island along with the other tourists in order to observe it carefully. The volcano was ‘born’ from the sea and has significantly affected the geological form of the entire eastern Mediterranean – as well as human life and activity in the region.

The volcano of Santorini is active and was created millions of years ago. It is part of the Aegean volcanic arc (along with the volcanoes of Methana, Milos and Nisyros) and was formed by the movements of the African tectonic plate as it sinks beneath the Eurasian plate. Santorini (Thera) as we know it today is child of wild volcanic activity, which first shook the Aegean some 3600 years ago. Indeed Santorini was a volcanic island, initially called Strogyli, -in the prehistoric years- due to its round shape.The large eruption that took place in the Prehistoric Era and is known as the Minoan Eruption, is considered the largest in world history, together with the eruption of the Tabora volcano in Indonesia, in 1815. Since then, the volcano has erupted many times over the centuries, constantly changing the image of the island, creating and destroying several small islands in its perimeter.

What the locals mean today by volcano, is the small island of Nea Kameni, situated almost in the center of the circular perimeter formed by Santorini, Thirasia and Aspronisi. It is only logical, since on Nea Kameni one can see the fumaroles emitting steam from the depths of the earth, and a part of the island was formed only 60 years ago, during the eruption of 1950. The adjacent island of Palea Kameni was formed almost 2000 years ago, during the eruption of 47 AD.

Both islands of the volcano are open to the public and you can even walk upon them and visit the fumaroles of Nea Kameni or swim in the warm waters of Palea, where sulfur colors the water with a yellowish hew. Scientists from a wide range of disciplines closely monitor the volcanic activity, since the Santorini Cluster, which includes both of the volcanoes of the Palea and Nea Kameni and the submarine volcano, Kouloumpo, are considered to be the most active part of the Aegean volcanic arc.