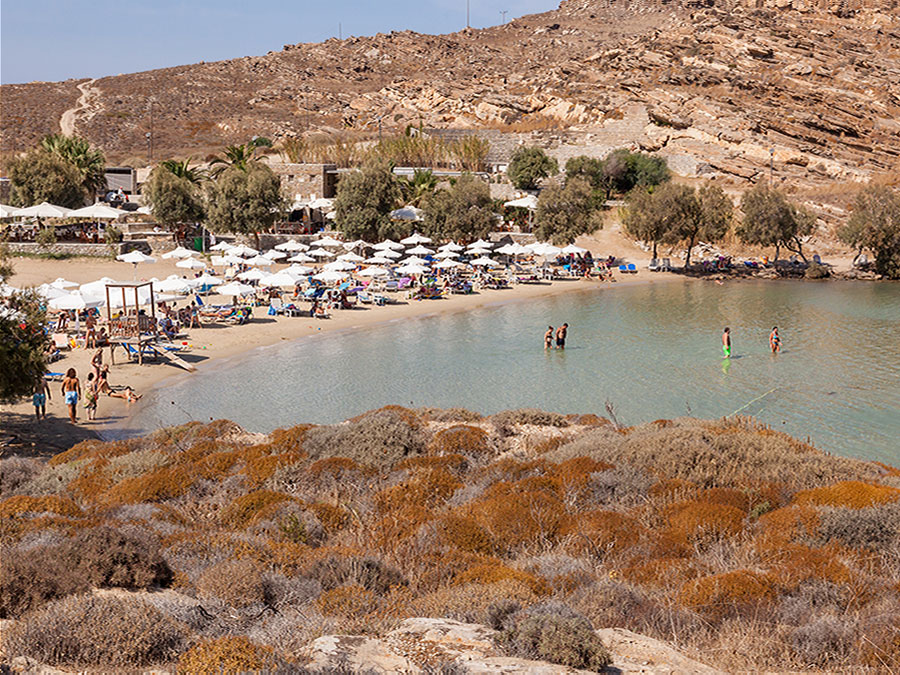 At the northwest corner of the bay of Naoussa, on the peninsula of Ai-Giannis Detis, as the road continues after Kolymbithres, you will find yourself on a beach that for those who have already visited Paros, but also for those who have decided to visit and consult tourists guides, is known as the Monastery. She owes its name to the monastery of Ai-Giannis Detis, which dominates white on the hill, to its right. However, the beach at the Monastery is the central point of redevelopment of the entire Ai-Giannis Detis Peninsula, where the Municipality of Paros "crafted" the Environmental and Cultural Park of Paros, and from this year it gives its name to the whole region. Perhaps its old name, "Monastery," as old habits are difficult to cut, however, which of the two names will eventually prevail. The narrow "hug" formed by the surrounding hills defines a hospitable beach - right across from Naoussa - which is currently not filled with the well-known "set" umbrella-deck chair because there is ample space for those who prefer the constant value of the shade from the salt-trees, the well-known "thalassodendra", which predominate in every beach in Paros. The sea is crystal clear and cool, while the beach is suitable for families as its waters are shallow, ideal for children is toys, which are easily transported to the sandy beach, with a very wide width. On the sandy beach there is also a refreshment room, as well as a restaurant, both tastefully and totally tied to the surrounding area, as they are made entirely of local stone, the fishpond that dominates all over the hills. The building is surrounded by almonds and large palm trees. The monastery can be reached either by your own means of transport, as the asphalt road is absolutely passable - the route will fascinate you as you pass between the beautiful curved rocks - or with a tourist boat from the opposite Naoussa.