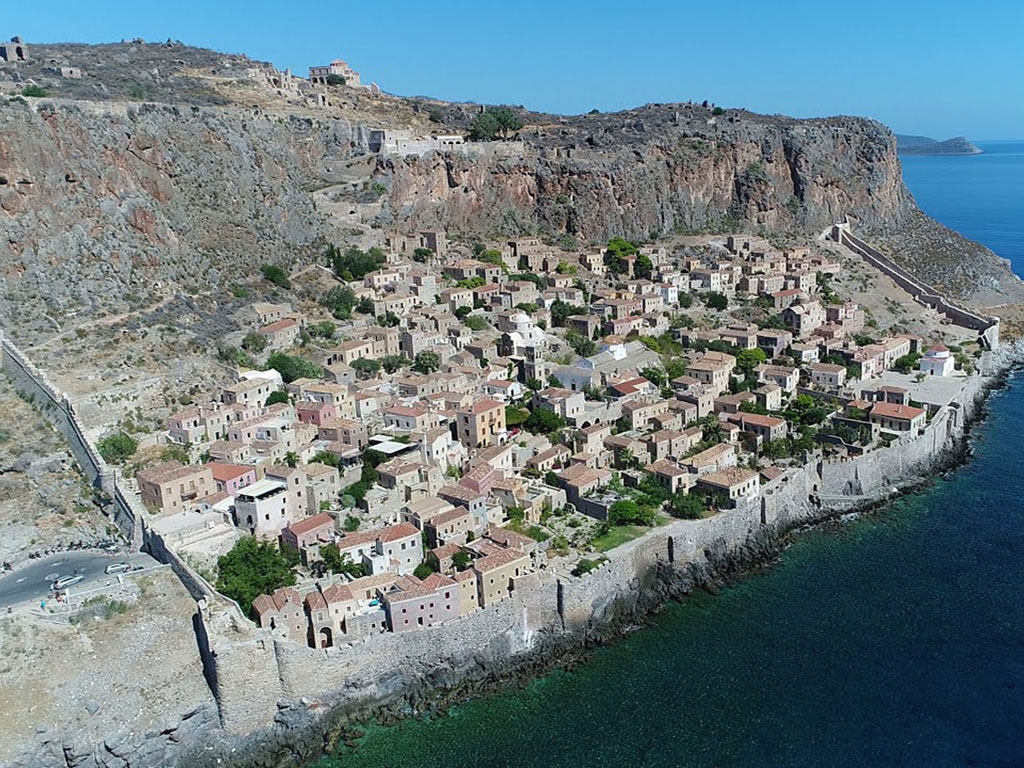 Monemvasia is one of the most important medieval fortress-cities of Greece. It is also one of the most beautiful castles in the world. Its area consists mostly of a large plateau some 100 metres above sea level, up to 300 m wide and 1 km long, the site of a powerful medieval fortress. The town walls and many Byzantine churches remain from the medieval period. Monemvasia is built in a rock which is a connected with a narrow and unique road to the mainland. Thus, it had always been well protected from the raids of the barbarians. "Monemvasia" means "one-way".

The town and fortress were founded in 583, during the reign of the Byzantine Emperor Mauricius, by people seeking refuge from the Slavic and the Avaric invasion of Greece. A history of the invasion and occupation of the Peloponnese was recorded in the medieval Chronicle of Monemvasia.

From the 10th century AD, the town developed into an important trade and maritime centre. The fortress withstood the Arab and Norman invasions in 1147; cornfields that fed up to 30 men were tilled inside the fortress. William II of Villehardouin took it in 1248, on honourable terms, after three years of siege; in 1259 William was captured by the Greeks after the Battle of Pelagonia and in 1262 it was retroceded to Michael VIII Palaiologos as part of William's ransom.

It remained part of the Byzantine Empire until 1460, becoming the seat of an imperial governor, a landing place for Byzantine operations against the Franks, the main port of shipment (if not always production) for Malmsey wine, and one of the most dangerous lairs of corsairs in the Levant. The Emperors gave it valuable privileges, attracting Roger de Lluria who sacked the lower town in 1292. The town welcomed the Catalan Company on its way eastward in 1302.

In 1397 the Despot of the Morea, Theodore I Palaiologos, deposed the local dynast of Monemvasia, who appealed to Sultan Bayezid I and was reinstated by Turkish troops. In 1419 the rock appears to have come into the possession of Venice, though it soon returned to the Despot.

About 1401, the historian George Sphrantzes was born in the town. After the fall of Constantinople in 1453 Monemvasia held out against the threats of Sultan Mehmed II in 1458 and 1460, when it became the only remaining domain of the Despot of the Morea, Thomas Palaiologos, claimant of the Imperial throne. He had no forces to defend it; he offered it to the Sultan, and finally sold it to the Pope.

By 1464 the inhabitants found the Pope's representative feeble and the Pope unable to protect them; they admitted a Venetian garrison. The town was fairly prosperous under Venetian rule until the peace of 1502-3, in which it lost its farm lands, source of its food supply and of Malmsey wine. The food had to come by sea or from Turkish-held lands, and the cultivation of wine languished under Turkish rule. The rock was governed by the Venetians until the treaty of 1540, which cost the Republic Nauplion and Monemvasia, her last two possessions on mainland Greece. Those inhabitants who did not wish to live under Turkish rule were given lands elsewhere.The Ottomans then ruled the town until the brief Venetian recovery in 1690, then again from 1715 to 1821. It was known as "Menekşe" ("Violet" in Turkish) during Ottoman rule and was a sanjak (province) centre in the Morea Eyalet. The commercial importance of the town continued until the Orlov Revolt (1770) in the Russo-Turkish War, which saw its importance decline severely. The town was liberated from Ottoman rule on July 23, 1821 by Tzannetakis Grigorakis who entered the town with his private army during the Greek War of Independence.

The urban development of Monenbasia was determined by the terrain and the area available for building. Upper City houses typically stand two or three storeys tall, are larger than those in the Lower City and are built parallel to each other. Most of the houses are to the south of the main market road in the Lower City, where building is dense.

The buildings owe their fine condition to the fact that they were well built of sturdy masonry and durable mortar, with extensive use of vaults.Three different types of houses are found in Lower City: one with the façade on the narrow side, another with the façade on the broad side, and the square type which has more or less equal sides. The houses are founded on the bedrock, built of solid masonry and covered with domes, which are typically 3 metres wide.

Cisterns were built in between the foundations to collect rainwater via a network of wells and pipelines starting on the house roof. At foundation level or immediately above there were domed storage areas mainly for olive oil and wine, though in some cases they may have been used for stabling animals. The rest of the house was usually on two levels above the domes. The lower one at street level provided access to the house and contained the kitchen area with the fireplace and cistern hatch; in older buildings there were also toilets similar to those at Mystras. A wooden staircase led to the main living areas on the upper floor. This had a fireplace, a balcony and as many windows as possible. Particularly in later years, rooms were separated by thin walls of rough materials such as planks and plaster (çatmas). If there was any space available, more rooms were added; in some cases the houses extended into archways over the streets. Finally, any courtyards or gardens would have been very small. 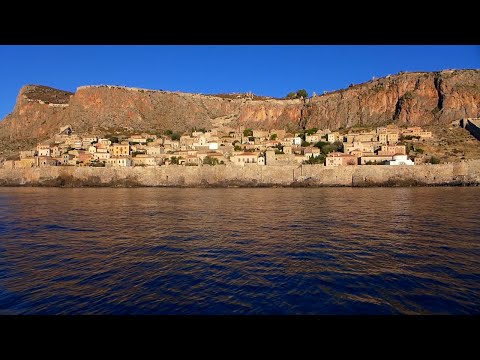