Anavatos is an impressive medieval village located at the center of Chios island. It is 20 kilometers away from the main city and is built on a sheer hill 400 meters high.
The village is accessible from its north part only. The first villagers expanded on this natural fortress by building huge wall, surrounding the village.
Furthermore, all the houses are made of stone and they are all closely attached to each other. That is why Anavatos is a rare case of architecture. The name "Anavatos" literally means unassailable.
Most inhabitants were massacred by the Turks in 1822, during the war of independence. In addition, many buildings were destroyed by an earthquake in 1881.
The village is now almost deserted. Only a few people live there during winter, although there are many visitors at summer time.
However, most of the buildings are still in a very good condition. During the summer, Anavatos is an ideal place for walks (the village streets, made of stone, are very picturesque) or for coffee or traditional greek cuisine at the tavern at the entrance of the village. 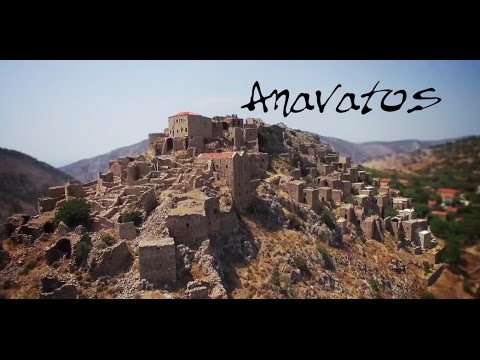