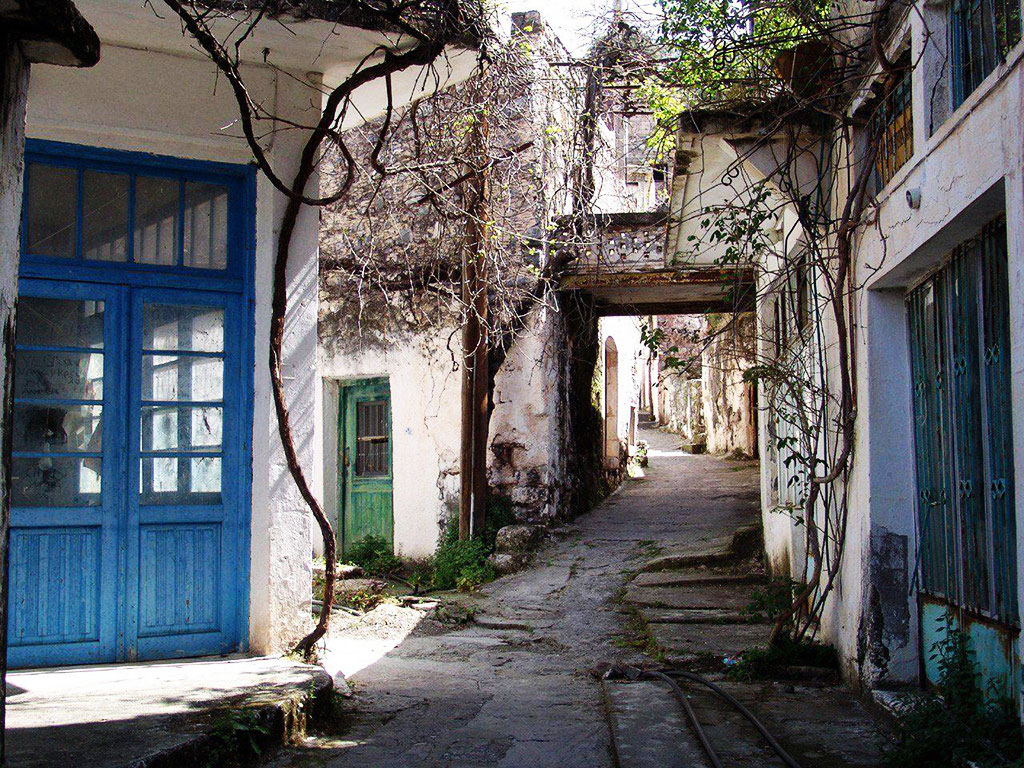 Kalami is a settlement located in the southeastern part of the Municipality of Viannos in the homonymous province of the Prefecture of Heraklion. It is far away 78 km by road from Heraklion, 14 km from Ano Vianno (capital of the Municipality) and 31 km from Ierapetra. The main church is of Agios Georgios.

The village is built on the edge of a small basin at an altitude of 480 meters, which today stands deserted and abandoned. The cameraman Nikos Sarantos had recorded with his camera the "eerie" environment of the village. He made a documentary about the area entitled: "Kalami, the face of abandonment". In 2016, it was screened at the Los Angeles Film Festival.

Kalami was probably built at the end of the Venetian occupation and the beginning of the Turkish occupation. Natural factors, mainly reasons for protection from enemy attacks, contributed to its construction in a semi-mountainous area. Thus, while it is close to the sea, it is not visible for security reasons. This is happening in most of the villages in the municipality, because they were afraid of the various pirates of the Mediterranean, who were looting and committing acts of violence against the inhabitants of the coastal areas. So they wanted their villages not to have visual contact with the sea.

In the place of today's church of the village, Agios Georgios and Charalambos, where the Christians of the surrounding villages used to go secretly to pray, the first houses were built next to it. Later, more and more people came to live in Kalami, which began to grow and expand slowly. The main occupations of the people of Kalamia revolved around the cultivation of olive trees, cereals, fruit trees, mainly citrus, carob, vines and to a lesser extent engaged in animal husbandry. All their occupations were aimed at meeting the needs of their families. The development of the living standards of the inhabitants began after 1960, when the occupations turned to the cultivation of early vegetables and banana cultivation.

Kalami, as the main center of residence of the rural population, like most mountainous settlements, was of secondary importance during the winter months mainly and had given the first place to the winter settlements (winter), which were lower and with milder climatic conditions.

Thus, in the whole municipality there were the so-called "metochia", micro-settlements that were used seasonally for the cultivation of the land and the harvest of fruits. The most important shares were Vigles, Skafidia, Psari Forada, Roussos Lakkos, Pente Petres etc. These were mainly used for growing cereals and picking olives. In fact, there were many olive mills (plowshares) for grinding olives.

Under the Aleppo Convention (1878), the villagers were able to obtain rights after the creation of a semi-autonomous province with special privileges (exemption from certain taxes, the right to education, religion, etc.). In 1879, Kalami acquired a school, which until the last years it functioned, until it was abolished in 1987. Also until 1916 in the church of the village were housed two parishes, with priests the brothers Antonis and Grigoris Mavrakis. In fact, on the feast of St. George, one year the festival took place in one parish (upper neighborhood) and the next in the other parish (lower neighborhood), with a special splendor.

Kalami flourished in the 1930s (until the German occupation). It was the most developed shopping center in the municipality. On the beach of Psari Forada, since 1920, there was a customs office as well as seven warehouses (shops), where ships came to unload and load goods of various kinds throughout the municipality. The goods were transported by animals, through Kalamio and reached Arkalochori.

In 1929 the first diesel-powered oil mill was built in the village. This factory was a station of progress and the area that was and is olive production, produced olive oil with a new system and comfort. In 1931, a second, this time water-powered, oil mill was established, because only one was not enough for the needs of the inhabitants. At the same time, there was a water-powered flour mill.

The professions of all kinds have also flourished, many of which have now disappeared. A special place was occupied by the grocery store that sold, among other things, fine fabrics from Athens and Heraklion and people from all over the municipality came to shop. During the years of German occupation, the entire municipality of Viannos experienced the disaster.

In 1949, a reconstruction team arrived in Kalami, consisting of five Swiss, who built many damaged houses. However, the most important project that took place in the area at that time was the construction of an aqueduct with iron pipes and a cement plant. In the same year, the Viannos-Sykologos carriage road was opened. In 1952, the Sykologos-Gdochios road was opened and the village and Ierapetra communicated by road. Until then, the only road to Ierapetra was a cobblestone path built during the Turkish occupation. The road network for Heraklion and Ierapetra improved after the 1960s, when roads to Kalami were asphalted.

Today, the image that Kalami presents has strong signs of desolation. Most of the houses are abandoned, because their inhabitants have relocated to the coastal settlements with a focus on Psari Forada (Sidonia). The official census of 2001 states that Kalami had 44 inhabitants that year. The view of the village is narrow, with a direction from east to west. The roads are very narrow and cobbled and do not allow car traffic. Cars pass only through the ring road of the village.