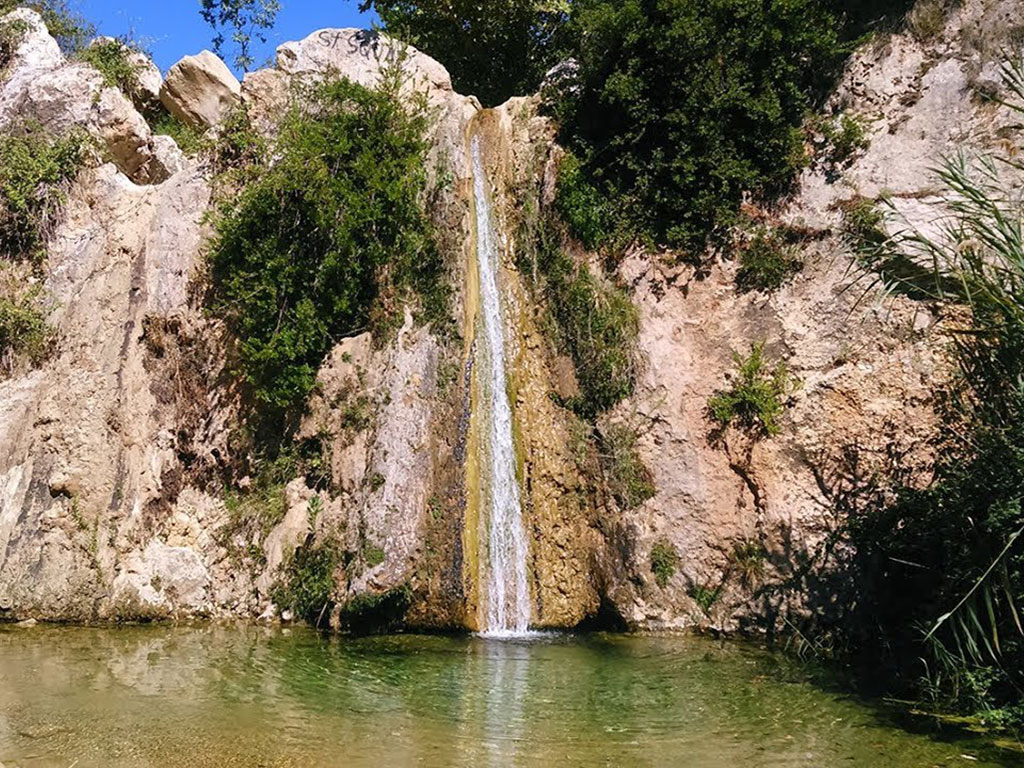 A small but beautiful waterfall of Attica that although the nature around him suffered huge destruction, remains a perfect refuge for several species of fauna. The stream of Valanari is one of the last wild ravines near Athens. It is also known as Lykorema, Vathirema and Grand Stream. The Valanaris name assigned to the forest of oaks that once dominated the surrounding hills.

The stream starts from the heights of the southern Mafrinoras Penteli, initially moves south and then headed east where he creates the stream of Rafina on a route about 16 km. In the middle of the route, at the height of Ntrafi creates a waterfall, 6 meters, from the minimum of Attica. The stream has water all the time, and depending on the rains cataract changes form. When scarcer water two twin waterfalls are created, and when it rains a lot, the stream becomes a torrent as possible. On the top side of the waterfall there is a small loutsa and immediately follows a nice canyon. Geologically the area prevailing mixed layers of conglomerates, sandstones, marls and red clays. The constant fires that break out almost every year in Eastern Attica He has turned the area into wooded shrub. However, due to the permanent presence of water, the stream attracts many wild animals.

Before the major wildfires in the area there were trees and pines. Now the surrounding hills one encounters lentisks, holly, mullein and several small bushes. In the bed there are still a few small trees, and oleander, osier, small willows and clumps of reeds. The vertical cliffs of the small gorge grow fig trees. The flora includes species encountered and Penteli. The most important plants of these is Tussilago farfara, the Cerinthe major, iris Iris attica and I. Tuberosus, the Centaur Centaurea attica, the Alkanna tinctoria, the Onobrychis ebenoides, the Euphorbia Euphorbia acanthothamnos, the Globularia alypum, the Ornithogalum comosum, the Tragopogon porrifolius and orchids Orchis italica, Himantoglossum robertianum, Ophrys calocaerina, the. Ophrys ferrum equinum and O. sicula.

Very important is the Valanaris for birds. Inside the canyon the presence of aktiti observed, while the vertical cliffs frequented kestrels. Other birds in the area is the sparrow hawks, owls, partridges, snipe, grouse, Sardinian Warbler, the Blackcap, the spitochelidona, the stavlochelidona, the Swift, the larks, the lefkosousourades, Yellow Wagtails, robins, rare koufaidonia , the redstart, the mafrolaimides, the woodchat shrike, the goldfinch, the greenfinch and fryganotsichlona. Near the waters of Valanari live toads, prasinofrynoi and valkanovatrachoi and frequent is the presence of kraspedochelonas and Mediterranean turtle. Other species of reptiles is ablepharus kitaibelii the chalcides ocellatus, the silivouti the tranosafra the whip snake, the Laffite, the European Ratsnake and the water snake.

The waterfall of Valanari is a great choice for leisure near Athens, but also an ideal place for nature walk with children. The path it down is a bit steep, but the bed continues calmly and one can easily walk with small children for a few kilometers. The opportunities for observing wildlife are many.