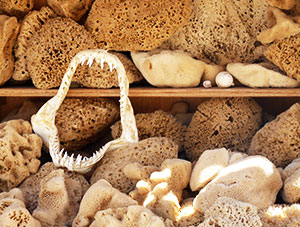 For over 200 years, the inhabitants of Kalymnos have been engaged in sponge fishing. Sponges are living organisms that grow, survive and depend directly on the environment in which they live. The quality of the sponge depends on many parameters such as water temperature, lighting, ripples, the presence or absence of currents, the depth at which it grows, and even the age of the animal.

However, in recent years the production has been reduced and is in danger of disappearing, mainly due to the climate change. The problem began in 1986, when an unknown disease broke out in the eastern Mediterranean. A deadly bacterium struck the sponge colonies, causing them to gradually die. The same happened in 2000 as well.

Nowadays, the annual production is almost two tons, which makes it prohibitive for young people to be engaged in sponge fishing. In Greece there are mainly two commercial types of sponges, the "Honeycomp" and the "Fina Silk". The first is found at a depth of up to 80 meters in Crete, Cyclades, Evia and in the Dodecanese. The second, which is considered of better quality is more expensive and is found at depths, which reach 100 meters, mainly in Crete, Evia, Samos and in the Dodecanese. 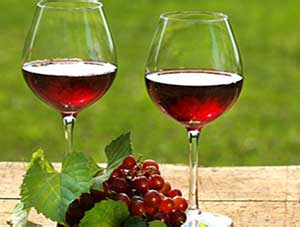 Kalymnos is famous for the famous sun-dried wine "Anama" which was once the only table wine, with the exception of retsina, which was served in the traditional cafes. It is a sweet wine made of two different wine varieties, 50% from Moschato and 50% from Fokiano.