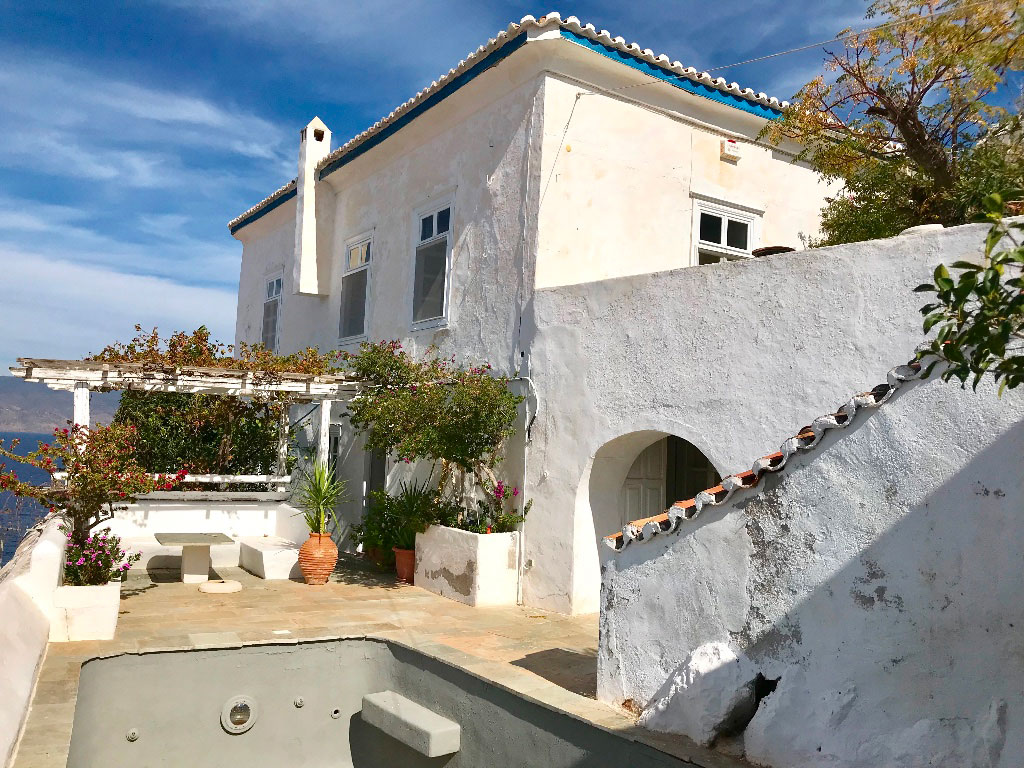 The Mansions in Hydra are three-storey and four-storey imposing and yet simple buildings, closely linked to the glorious history of Hydra. They were built in the late 18th and early 19th century, a time of economic prosperity for the island thanks to commerce and shipping, and bear elements of Genoese architecture. The wealthy shipowners, having traveled a lot, wanted to "introduce Hydra into the features of a European architecture so that they could join the lifestyle of western bourgeois society, as George Prokopiou writes in his study" Architecture of the Hydra mansions ".

On the eastern side of the harbor you can see the Mansion of Lazaros Tsamados , today's Shipwreck School, which keeps the Hydra naval tradition and the Kriezi Mansion , where the Nursing home is housed. Above the waterfront dominates the historic residence of Lazaros Kountourioti , which today serves as an annex to the National Historical Museum. Built in the shape of a P, painted with natural ocher and furnished with the "good faces" in the northeast, it shows us the room where Lazarus Kountourios spent most of its time and other interesting rooms, such as the icon near the entrance and the smoking room hookah.

On the west side of the city you can see the historic Mansion of Frangiskos Voulgari (has been declared a Historic Listed Monument according to Government Gazette 373/Β/19-5-1994), one of the important Mansions of the 1800s, at which today Villa Hydrea is housed. It has oriental elements such as the wood-carved ceilings at an Ottoman rococo rhythm. There is also the marble fountain in the dance hall with the loft for the musicians and oil paintings of nautical subjects. The Mansion surrounds large wooden windows that overlook the harbor, as well as beautiful verandas. On the western side of the city you can see the four-storey Tombazishte Mansion in Italian style, built by Manolis Tombazis and his wife Xanthi Sahini, which belongs to the School of Fine Arts since 1936 and functions as a part of it. Nowadays its rooms function as guest houses for emerging artists who come to fight with the colors and magical volumes of Hydra. The roofs and wooden doors in the interior are new and the upstairs living room with the mallets on the floor is considered to be the most authentic room. The four corners and the central rosette have been preserved on the ceiling. The lollies are unique. Behind the Mansions of Voulgaris and Tombazis, on the hill with fortification between the pine trees and the magnificent view, stands the Mansion built by George Kountouriotis , one of the largest shipowners of Hydra and an active politician during the Revolution. Later, he inherited his grandson, Paul Kountouriotis, Admiral during the Balkan Wars and First President of the Hellenic Republic. Each of its windows, if opened, perfectly frames the landscape, as a work of art that sometimes depicts the sea and sometimes the picturesque settlement. Today it functions as a Museum of Hydra's recent history. In the same area there are also the mansions of Votsi and Oikonomos (has been declared a Historic Listed Monument according to Government Gazette 511/Α/16-12-1937) and other old mansions of some other historical persons who, by turning their merchant ships into war, lost their fortunes and identified their name with the independence of Greece.

The inhabitants of the island, which until then were characterized by whitewashed terraces, quickly copied the four-sided roofs of these large houses and so the city of Hydra got its well-known uniform image. "If you begin to observe the details, Hydra is inexhaustible," says artist Dimitris Antonitsis as we enter one of the old Kriezes Mansions , smaller in scale but very special for the respect that has been approached by the important American artist Brice Marden (current owner). Drawn plaster around doors and windows, floors with octagonal ceramic tiles, wooden mussels, and even the handmade door to the old chicken coop have been preserved with almost touching care. West of the city, outside the settlement, there is also the Boudouris Mansion(has been declared a Historic Listed Monument according to Government Gazette 236/Β/3-4-1989), which has a garden and its own chapel. In the district of Kala Pigadia there is the Gorgiannis Mansion (has been declared a Historic Listed Monument according to Government Gazette 797/Β/30-9-1991), which features a typical Macedonian-style living room.