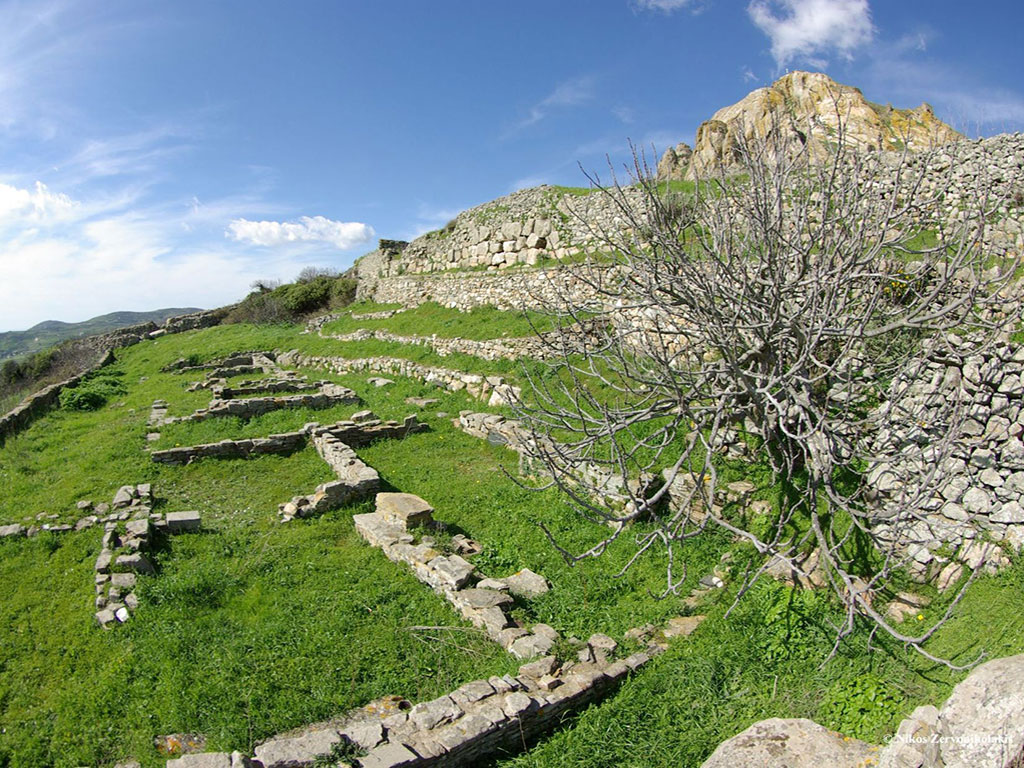 Exomburgo or Xomburgo or Tinos Castle or Agia Eleni Castle was the castle of the island of Tinos. It was on a conical rocky hill 640m high dominating the south part of the island. The castle is now destroyed, but between the 13th and the 16th centuries, it was one of the strongest castles in the Aegean.
History
It was an ancient castle. The older fortifications date back to 1100 BC. In the classical period, it was the center of Tinos. The medieval history of Tinos is obscure. The island came out of the shadows after the 4th Crusade. In the turbulent times that followed the capture of Constantinople in 1204 by the “Latins”, Tinos became the fief of two Venetian brothers: Andrea and Jeremiah Ghisi. This happened in 1207.
One of their first moves was to erect fortifications and entrench the rock, making it a stronghold. The name of the castle those days was “ Castrum de Tine” or “Castello di Santa Elena” from a chapel of St. Helen on its peak. The Ghisis’ rule ended in 1390 and was followed by the direct rule of the Venetian Democracy, after an appeal by the islanders who were trying to avoid their annexation to the Ottoman empire. Venice appointed a commander with the title of Rector or “Rettore di Tine e Micone”.

In 1537, the notorious Ottoman admiral and pirate Hayreddin Barbarossa conquered Tinos and the castle. That year, Barbarossa was too busy plundering the islands and the coasts of the Aegean and the Ionian, so he didn’t stay long in the island. After his departure, the previous regime and the Venetian rule were reinstated. Barbarossa returned in 1541, but this time failed to take the castle. The island remained the only dominion of the Venetians in Cyclades. The fortress was rebuilt and reinforced to withstand bombardment by canons. The end came in 1715 during the 7th Venetian-Turkish war. The Ottomans launched a huge campaign to regain Peloponnese and achieved a sweeping Victory against the Venetians who lost all their possessions in Greece (except those in the Ionian sea). One of their first losses was Tinos.
On 5th June 1715, a large Ottoman force landed on the island and besieged the castle. The Rector realized that his 50 men could not resist and started negotiations. Soon, the castle was surrendered and the defenders were allowed to make a decent exit with their arms and flags. The Turkish force was in the middle of a military campaign so they left Tinos after 15 days. Before their departure, they blew up and destroyed the castle completely, fearing, apparently a come-back by the Venetians.
That was the end of the 508-year Venetian occupation of Tinos. The inhabitants of the demolished castle founded a new settlement on the hill, outside the old borgo. This new place became known as “Xomburgo”, hence the current name of the location. Xomburgo gradually declined, as the port at the south, the present-day Chora, became the new center of the island.
Source: Kastrologos