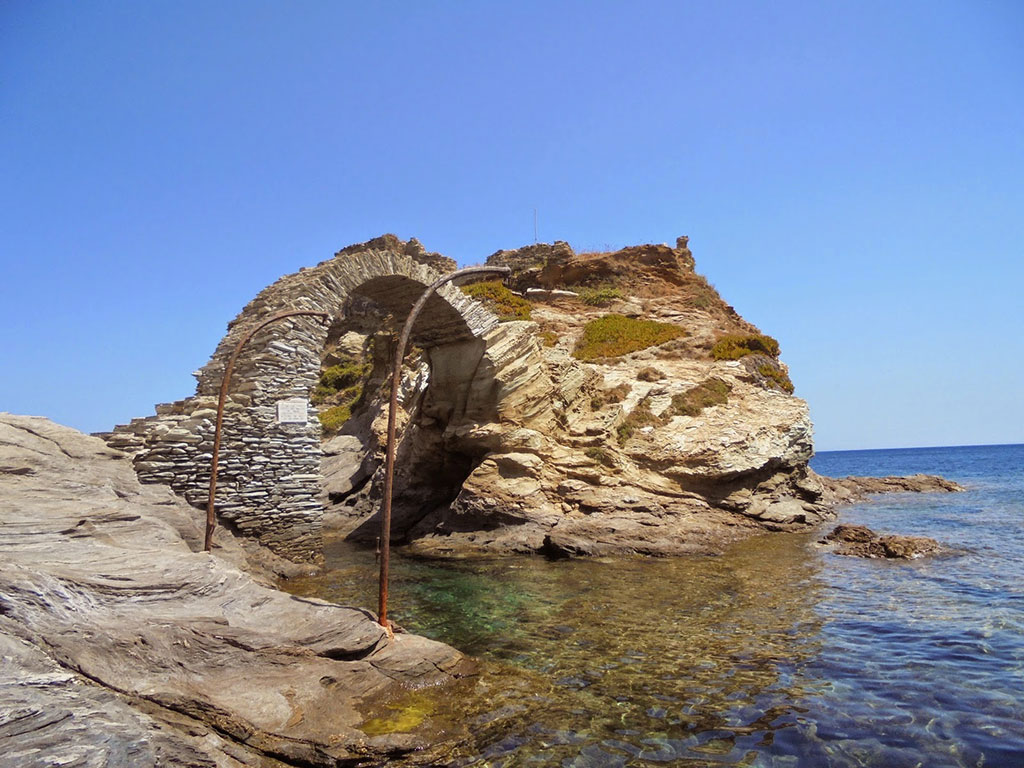 The castle of Andros used to be one of the most important castles in the Aegean. Today, it is ruined, although it remains one of the touristic attractions of Andros. The Lower Castle was built on a small peninsula and on an islet at the eastern part of the island of Andros, where Chora is located today. The site offered natural protection being surrounded on three sides by water with only the western one facing the mainland.
The name of the castle in Greek is "Kato Kastro" which means Lower Castle to distinguish from the other major castle of Andros, the Upper Castle or Castle of Faneromeni. The castle is often mentioned also as "Mesa Kastro" (Inner Castle), a name that usually refers to the part on the mainland only.
History
After the 4th Crusade and the Fall of Constantinople in 1204, the Latins turned to other parts of the Byzantine empire. Andros was captured by the Venetians in 1207. Their leader was Marino Dandolo, a nephew of The Doge of Venice, Enrico Dandolo, one of the heads of the 4th Crusade.
The Venetians built three major castles in Andros: :the Lower Castle (the modern Chora), the Upper Castle (also known as Phaneromeni) and the fort of Makrotantalo (or Ostodosia). The first two were fortified settlements, while the third was a simple outpost, probably manned by a small garrison.
Most important of the three and the most notable today is the Lower Castle or Kato Kastro. The Lower Castle was built by Marino Dandolo almost immediately after the capture of the island. He started by building his mansion on the little island at the tip of the peninsula.
In 1566 Andros was conquered by the Ottoman navy, and the Castle was afterwards only sporadically used. The castle was in very good condition until World War II. Then in 1943, the Germans bombed the port of Andros and the castle was almost completely destroyed.
Structure, Fortification & Buildings
The settlement was surrounded by a single curtain-wall, formed by the back walls of the inhabitant’s houses. What remains nowadays from this wall is a small part of the curtain founded on bedrock. The construction of the settlement’s enclosure is typical for the Aegean islands during the Frankish period, especially for those belonging to the Venetians of the Ducat of Archipelagos (such as Sifnos, Antiparos, Kimolos).
The peninsula ends in a small fortified islet that functions as the castle’s citadel. The islet is in fact a high rock that offers natural protection on its own. It is presently connected to the settlement through a round-arched stone-bridge. Without doubt, both parts of the Lower Castle, the fortified settlement and the islet fort, are contemporary, conforming thus to a common medieval practice.
The fort included a single entrance located just opposite the settlement. Two towers survive, a large rectangular one at the center of the enclosure (Central Tower), and a smaller one at its northeast corner. The towers consisted of a cistern at ground level and one or more floors suitable for habitation that are not preserved. The cisterns were plastered with hydraulic coating and were covered with anointed Gothic vault. Both buildings should be dated to the first half of the 13th century.
Source: Kastrologos