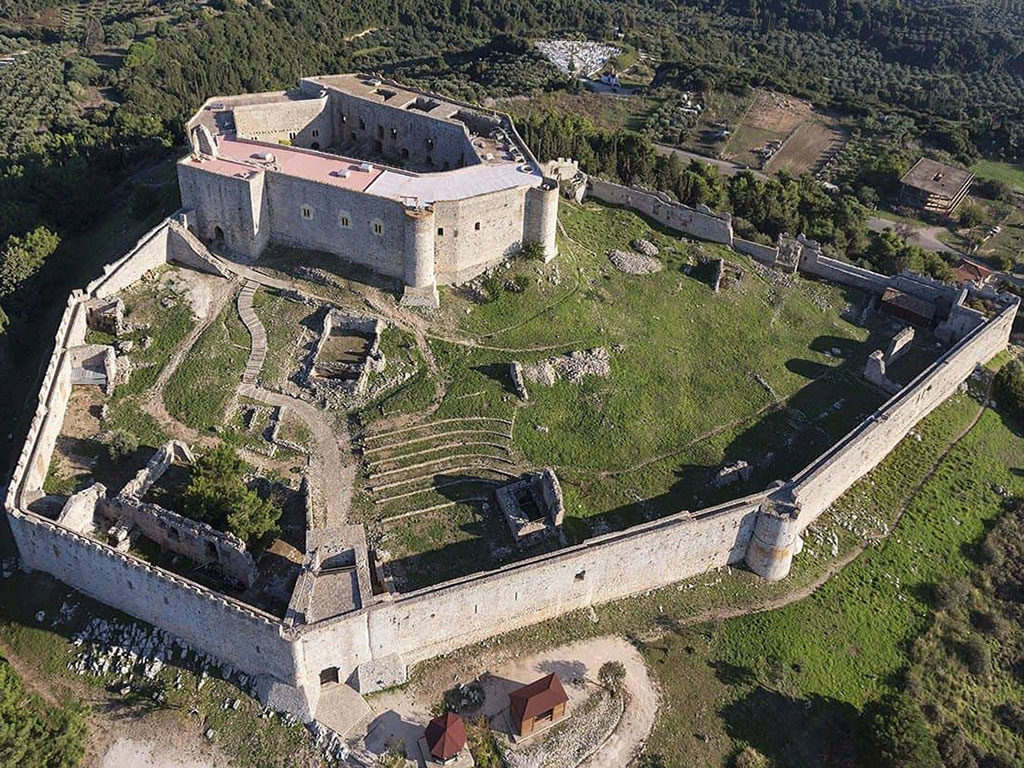 Chlemoutsi or Chloumoutsi or Clermont or Castle of Kyllini

Chlemoutsi is a medieval castle in the northwest of the Elis regional unit, Greece, 6 km south of Kyllini. It was built by the Crusader rulers of the Principality of Achaea as their main stronghold, and is perhaps the finest fortification of the early Frangokratia period preserved in Greece.
Chlemoutsi is located on a 220 m high hilltop at a small distance from the sea (around 2 to 2.5 km) in the westernmost point in the Peloponnese with a view of the Ionian Sea as well as Zakynthos and Kefalonia. Its strategic position offers views of large parts of Elis and Achaea. It was located close to the Glarentza Castle (around 5 to 6 km) and Andravida (around 12 to 13 km), the capital of the Principality of Achaea.
Apparently, the role of the castle was to protect those important and unfortified locations (Glarentza wa fortified later).
The Greek name of the castle, "Chlemoutsi", comes from the medieval Chronicle of Morea and is a corruption of its original French name, Clairmont. During the Venetian period, it was known as Castel Tornese, since the Venetians erroneously believed that it was the seat of the Principality's mint (it was actually located in nearby Glarentza), which minted the silver gros tournois coins.
History
The history of the castle's construction survives in the Chronicle of Morea.
The castle was built between 1220 and 1223 during the rule of Geoffrey I of Villehardouin, with the use of confiscated Church property (which caused friction with Pope Onorios III).
After the death of Wiiliam II Villehardouin (son of Goeffrey) in 1278, the castle followed the fortunes of the Principality and changed hands several times. The Catalan Company under Ferdinand of Mallorca took it in 1315, but he was defeated a year later by Louis of Burgundy, husband of Mathilde the legitimate heir to the throne. In the beginning of the 15th century, the castle passed into the hands of Carlo I Tocco, ruler of Epirus.
Through his marriage with Maddalena Tocco, the Despot of the Morea, Constantine Palaiologos (the future last Byzantine emperor) gained possession of Elis, including the castle. Constantine established his court there, and it remained one of the seats of the Despotate until its capture by the Ottomans in 1460.
Structure, Fortification & Buildings
The castle consists of a large hexagonal keep at the top of the hill, while the more vulnerable sides are further enclosed by an outer wall. The castle was well suited for a princely residence: its halls, arranged around the inner courtyard, were spacious, comfortable, and well-lit, cool in the summer and provided with several fireplaces for the winter months.

However, the architectural characteristics of the main keep are out of the ordinary for its supposed period of construction, and more in line with 15th century structures, which has led to uncertainty over its exact dating.
The castle is protected by two fortification walls. The outer one is polygonal in shape, while the inner is an irregular hexagon. The inner fortification is the main castle or the palace .
Both walls are preserved in relatively good condition.
The castle occupies an area of around 15,000 sq.meters. The external perimeter is 520 m. Part of the external perimeter, around 125 m, is part of the inner fortification.
1. External Wall
The outer enclosure was constructed later than the inner castle, but within the 13th century. It does not surround the palace on all sides. The total length of the wall is 395 m. It stretches north and west to the smooth slopes of the hill.
The northeastern part escalates to the top of the hill, in three straight sections until it joins with the inner wall. Something similar, but with a smoother escalation, is also happening in the southwestern side.
The maximum height of the outer walls is 10 m.
The main gate is located on the northwest side of the outer wall. The gate was reached after passing a wooden movable bridge over the moat that surrounded the castle.
The main entrance leads to a large inner yard measuring 60x70 m. Here there are ruins of many auxiliary edifices like stables, warehouses, cisterns etc. At the centre of the yard are the remains of a mosque built around 1500 by Sultan Bayezid II.
2. Inner fortification
The inner (and main) part of the castle is an hexagon in shape with a perimeter of 225 m and an area of 4000 sq.m.
A distinct characteristic of this castle is that along the entire interior of its walls there have been built large vaulted halls that form a ring. There are six halls 7m high and all but one with two floors. This ring leaves room for an interior courtyard with dimensions 55x35 m and an area 1400 sq.m.
The entrance of the main castle is at the NE side through a well design corridor.
After the gate there is a door leading to a big room 70m long that was probably the throne hall.
Extensive restoration work is carried out in the castle for the last 20years. Some of the halls house nowadays a museum with exhibitions from the medieval and Frankish period of the region.
Source: Kastrologos 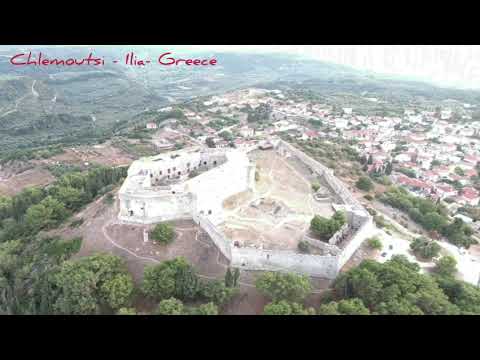