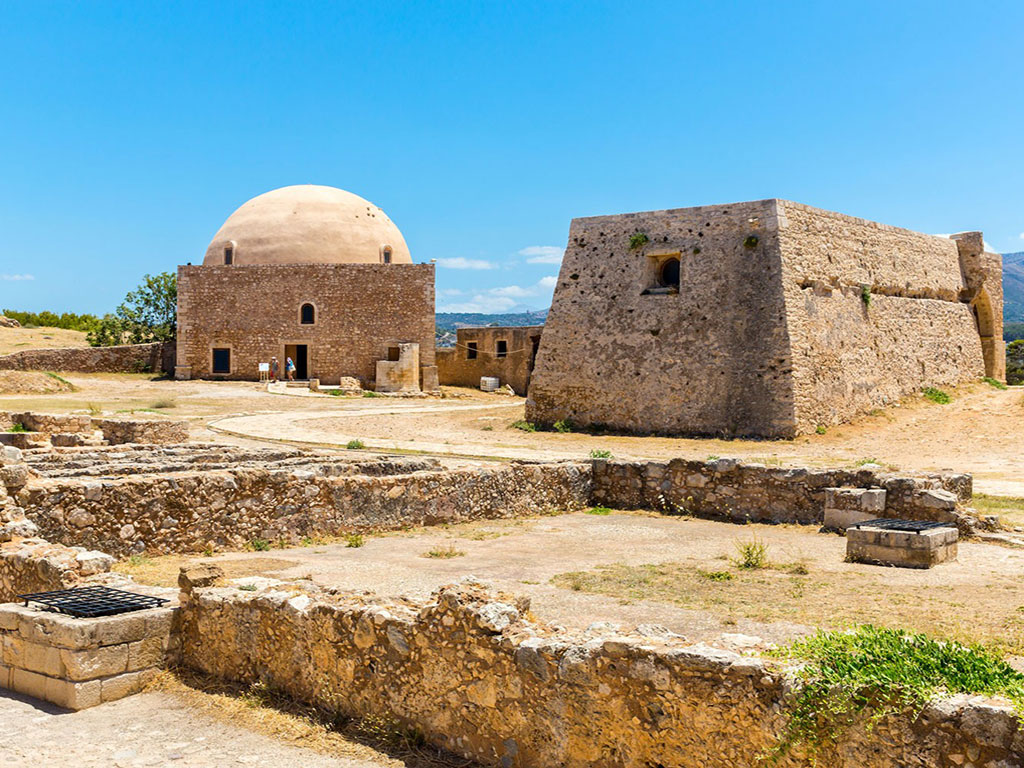 The Fortezza is the Venetian fortress of Rethymnon, Crete almost in the center of the old town. The castle is visible from every corner of the town and offers panoramic views of Rethymnon and the coast to the west.
History
It is possible that the hill on which the Fortezza is built was once an island joined to Crete by a narrow strip of land. Over the centuries the channel silted up and the hill became part of the Cretan mainland. Later, the hill of Paleokastro ("Old Castle") was probably the site of the acropolis of ancient Rithymna with its Temple of Apollo and Sanctuary of Artemis, although this has not been proven to date.
During the Second Byzantine Period (10th-13th c. AD), a small walled settlement was established east of Paleokastro hill, the Castrum Rethemi or Castel Vecchio or Antico Castello ("Old Castle") as the Venetians later called it.
In the early 13th century the Genoese pirate Enrico Pescatore, an enemy of the Venetians who claimed Crete for himself, seems to have repaired the Byzantine fortifications surrounding the buildings of the small town near the harbour. The Castrum Rethemi was preserved after the Venetian occupation of the island in the 13th century, but unfortunately nothing remains today of those fortifications.
The Venetians, as a marine power, intended to use Rethymnon as a shelter and intermediate base between Heraklion and Chania by building a small harbour. This led to Rethymnon becoming a city whose expansion necessitated the construction of new fortifications.
The events that followed in Crete from the first half of the 16th century onwards, the Turkish threat and the development of artillery after the invention and widespread use of gunpowder - led Venice to embark on the organisation of Crete's military defences and demonstrated the need for the Fortezza in Rethymnon. It was decided to build walls according to the plans of the Veronese architect Michele Sanmicheli. Construction started in 1540 but the walls were completed just before 1570.
The walls of Rethymnon were only token defences, which were unfortunately not strong enough to withstand the attack of the Turkish corsair Ulu Ali Reis, Pasha of Algiers, who in 1571 attacked Rethymnon with 40 galleys. The Venetians had abandoned the city, leaving behind only a small guard of 100 men who were unable to resist for long. Ulu Ali easily scaled the defences and razed the city to the ground.
This destruction demonstrated the need for more effective fortifications. The local authorities, both Venetian and Cretan, decided to build a fortress which could shelter all the houses in Rethymnon. The hill of Paleokastro was chosen as the most suitable site and work began on the Fortezza, one of the largest and most complete fortification works built in Crete under Venetian rule.
The foundation stone of the Fortezza was laid by the Venetian Rector (Governor) Alvise Lando on 13 September 1573. The project was completed by 1580. During these years, 107,142 Cretans took part in compulsory labour and 40,205 pack animals were requisitioned to work on the Fortezza, under the direction of master builder Giannis Skordilis.
The Fortezza was never a particularly secure fortress. Even in 1602, an official report mentions various flaws, such as the lack of a ditch (the outer area was a residential zone) or buttresses (the walls were low, without sufficient support), making the fortress easy to scale with ladders.
Rethymnon fell to the Ottoman Turks in 1646. The layout of the Fortezza does not appear to have changed significantly during the Turkish occupation. Fairly early on, the Turns converted the Venetian cathedral of San Niccol into the Mosque of Sultan Ibrahim Han. More houses were also built, mainly on the south and east sides of the fortress, for the Turkish garrison and administration.
Until the first half of the 20th century, almost the whole of the interior of the Fortezza was full of residential buildings. After the Second World War, however, the inhabitants of the Fortezza began to move out to other parts of Rethymnon.
The extension of the town led to the almost complete disappearance of the landward walls and the small ditch surrounding them. Inside the Fortezza itself, all the ruined buildings, mostly houses, were demolished, destroying any remaining traces of the Turkish period.
Today the outer fortifications of the Fortezza are preserved intact and some buildings are still being restored, allowing visitors to gain a good impression of life in the Fortezza in Venetian times.
Structure, Fortification & Buildings
The Fortezza was built according to the bastion fortification system, with bastions joined by straight sections of thick curtain wall, inclined outwards to make enemy missiles bounce off without damaging the fortress. The original plans of the military engineer Sforza Pallavicini were used, with some necessary modifications, improvements and extensions to complete the fortress.
Source: Kastrologos