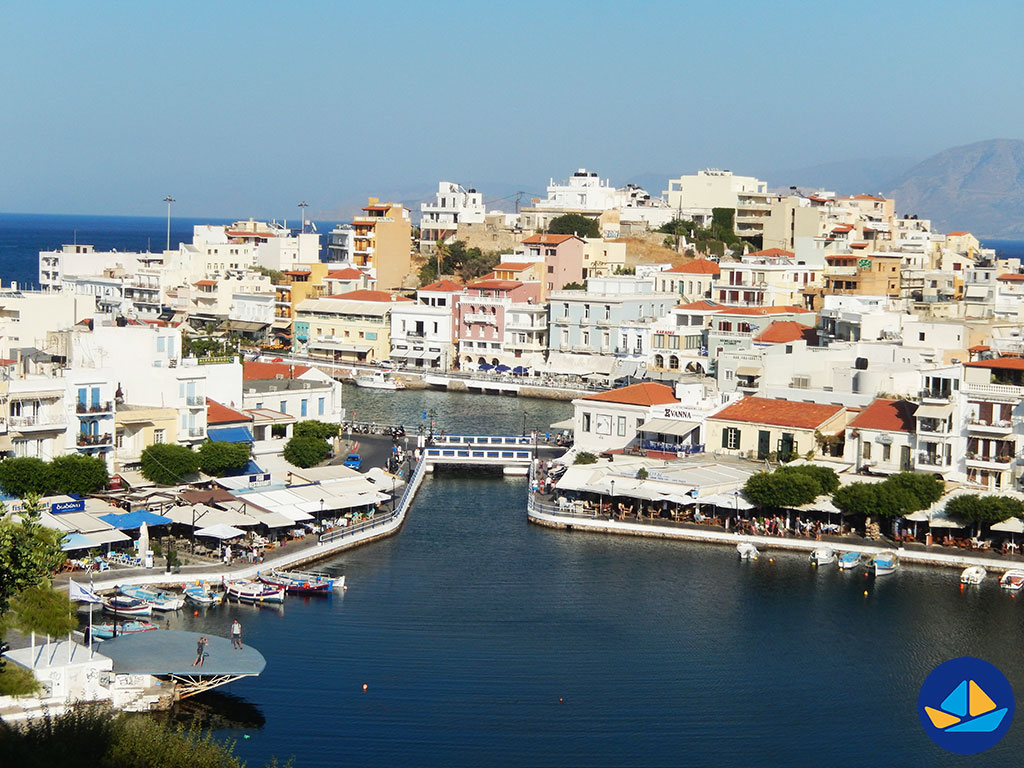 Agios Nikolaos is the capital of the Prefecture of Lassithi, built on the west side of the gulf of Mirabello, at Mandraki. It is a beautiful quiet small town which the Cretans refer to as "the Agios (Saint)", but its current name comes from the Byzantine church in the bay of Agios Nikolaos, while the older name was Mandraki, as there were many yards with goats.
A trademark of Agios Nikolaos is the picturesque Lake Voulismeni, a small lagoon in the city center, used to moor boats. Dozens of legends are associated with it due to its very deep waters, such as the fact that it has no depth. At the bottom of the lake the Germans had thrown war material before leaving Crete in 1944. Around the lake there are cafes and restaurants from where you can admire it. However, you will have the most beautiful view of Lake Voulismeni if ​​you go up to the small park that has been created above it, on its south side.
Other attractions of Agios Nikolaos are the neoclassical buildings, the marina (the first marina in Crete), the Archaeological Museum, the church of Agios Nikolaos on the Ammoudi peninsula, the island of Agion Pandon with the protected Cretan wild goats, the Kitroplatia, the sidewalk with cafes, the traditional village of Kritsa, the Katharos plateau, Spinalonga, Elounda and Plaka to the north.
History
Later, in the historic period, the city of “Lato pros Kamara” flourished on the same site as modern-day Agios Nikolaos. It was located on the hill between the lake and the marina, but only a very few finds have survived to the present day. The city of “Lato pros Kamara” was the port of the major Dorian city of Lato (Lato Etera) near Kritsa (10 km south of Agios Nikolaos). “Lato pros Kamara” flourished particularly in the 3rd century BC, as a commercial port and dispatch centre for mercenaries. Both Lato and Lato pros Kamara were independent cities with their own coinage (depicting Artemis, Eileithyia and Hermes Lation), and continued in existence through periods of rise and fall until the 6th century AD. No written information has been preserved on Agios Nikolaos until the 13th c. AD. In 1206 the Genoese arch-pirate Enrico Pescatore built a fortress on the hill of Kefali, where the Prefecture now stands.
The fortress was named Mirabello, because it offered a wonderful view of the whole bay. The fortress must have been so imposing that it gave the name of Mirabello to the whole province of Agios Nikolaos. But Pescatore did not have time to enjoy his fortress with its magnificent view, as Crete passed into Venetian hands. The fortress contained a salt store, where the valuable product of the Elounda salt-pans (a little to the northwest) was carefully stored. This shows how important salt was in commerce, and why the Venetians kept a tight grip on the Mediterranean salt monopoly at all costs.
At the foot of the fortress spread the burg, the houses of the local inhabitants, although in Venetian times the small settlement didn’t even reach as far as the lake. The Mirabello fortress went through various phases of destruction by earthquake in 1303 and pirates in 1537, but it was always rebuilt. The final destruction came in the 17th century, when the Ottoman Turks besieged it and took it by treason. The fortress was recaptured by the Venetians, but they could not keep it long, and blew it up on their departure. History tells us that during the Venetian period, the village of Agios Nikolaos, though relatively large by the standards of the time, did not extend very far and was inhabited exclusively by experienced fishermen.
At first, following the Turkish occupation, it continued to be inhabited and remained the provincial seat, but was then gradually depopulated until it was eventually abandoned entirely.
Although the village was abandoned, however, the harbour continued to be used for the export of local produce, mainly carobs. The goods were collected in open spaces, or even in the four churches of Agios Nikolaos at the time, because there were no storehouses. At the end of the Turkish occupation, after the 1866 rising, people started to come back to Agios Nikolaos. The inhabitants of Kritsa, a few people from Sfakia and merchant mariners from East Crete settled in the ruined village of Mandraki, which was to grow into the modern town of Agios Nikolaos. The inhabitants prospered from the citrus trade, which has left its stamp in the name of “Kitroplateia” (Citrus Square), a central district of modern Agios Nikolaos. The name Agios Nikolaos itself is not very old; the town is named after the small, single-aisled domed church on the small Ammoudi peninsula, opposite the coastal road.
View