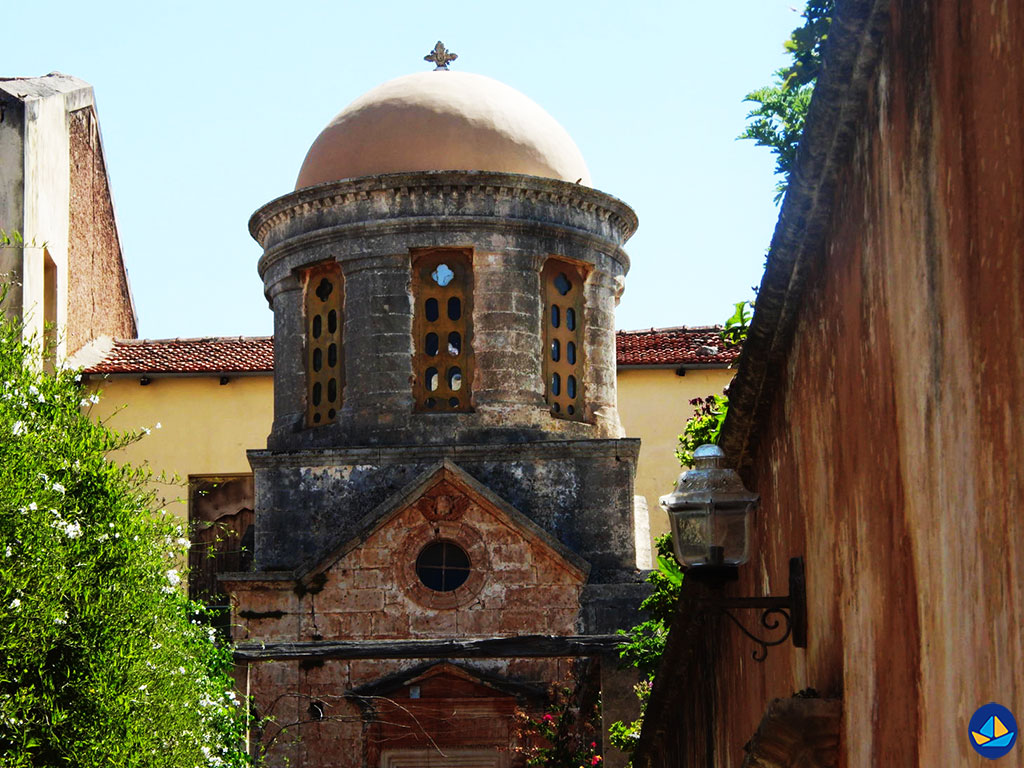 The Monastery of Agia Triada Tzagaroli is a Patriarchal - Stavropegian Monastery, and is located on the Akrotiri peninsula, 15 km from the city of Chania and close to I. Daskalogiannis Airport. It is one of the most important monastic complexes of the end of the Venetian occupation in Crete.
According to the historical sources, among them the Venetian archives, the monastery was built by the brothers Jeremiah and Lavrentio Jagarolon, descendants of a great Venetian - Cretan family. The construction began in 1611 and was completed after the fall of Chania to the Ottoman Turks in 1645. During the Ottoman period the monastery was known as the "Selvili Manastir" (the "Monastery with the cypress trees"). The outbreak of the Greek War of Independence in 1821 forces the monks to abandon the monastery which was then looted and burnt down by the Turks. The period of desolation ended in 1834 when the reconstruction of the monastery began followed by a new thriving phase.

Architecturally the complex combines the typical Athos Monastic style, namely the Byzantine tradition, with morphological, mainly decorative, elements of the western ecclesiastical architecture. The main church (katholikon) of Holy Trinity is a significant example of the Cretan Renaissance. It belongs to the circular domed temple type with three niches, narthex and chapels on the ground and the upper level. The main church is flanked by two smaller domed chapels, one of which is dedicated to the Life-Giving Spring (Zoodochos Pigi) and the other to Saint John the Theologian. The main church is dedicated to the Holy Trinity and the church has a narthex at the front set at right angles to the main aisle. There are two large Doric-style columns and one smaller, Corinthian-style column on either side of the main entrance. The facade of the church has double columns of Ionian and Corinthian style and bears an inscription in Greek, which is dated to 1631. The monastery's cellar door is dated to 1613. In the 19th century the monastery was established as an important theological school from 1833, and the belfry is dated to 1864. The monastery was later extensively damaged during conflicts with the Turks and in 1892, a seminary was established. Apart from the residences for the monks, the complex also included workshops, stables, oil and wine mill, cellars. Impressive is the main entrance of the monastery, also a remnant of the Venetian impact.
Today, the monastery also has a library which contains some rare books, and a museum which contains a small but valuable collection of icons and ecclesiastical heirlooms that have survived the catastrophes of the past is hosted in the monastery, confirming its erstwhile great wealth. Among the most important exhibits are a 12th century manuscript and an ensemble of 16th - 17th century icons, including the "Enthroned Christ", the "Source of Life" and the "Second Coming" (1635-1645), works attributed to the artist from Chania Father Emmanuel Skordilis, an important representative of the Cretan School of icon painting. Also the Tree of Jesse (1853), the Hospitality of Abraham and The Descent into Hades (1855), The Story of Beauteaus Joseph (1858) and a manuscript on a parchment roll with the mass of St Basil.