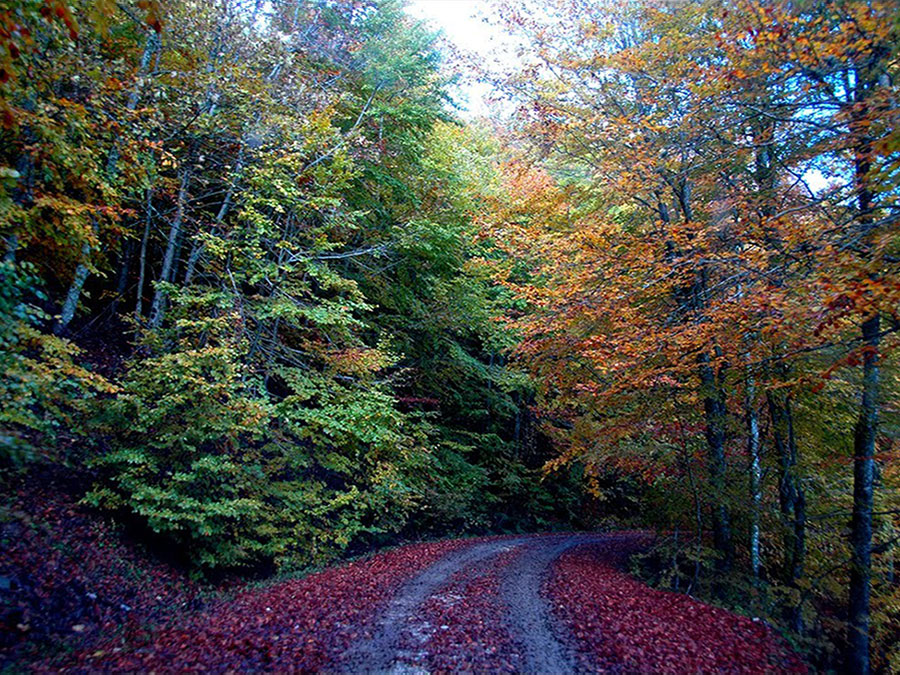 The National Forest of Pindos is one of our most important National Forests and it was established by the Royal Decree No 487/1966 published in the Government Gazette No 120/1966.

It includes the valley of Valia Calda (it is a Vlach word and means “Warm Valley”. It is so called because it has significant temperature fluctuations during the 24 hours, with very high temperatures during the day without cloudiness and very low during the night) , Arkoudorema, Lygos and Mavrovouni Mountains (Flega 2.159m) up to the tops of Mount Egg (Height 2.177m).

The geological composition of the Forest consists of rocks of the flysch’s group with enough oak, gorse, limestone and dolomite with a dominant appearance of serpentine. The soils of the Forest were formed by the disintegration of peridotti and serpentine. They are clayey, clay like texture, acidic chemical reaction and rich in magnesium and iron and often contain toxic concentrations of chromium, nickel, manganese and aluminum.

The frozen “warm valley” took its name by the public, as it is one of the coldest and wettest regions of Greece.

The climate is mountainous Mediterranean from the richest in Greece to precipitation (1.500mm / year) and snowfall. The summers are cool with several local rains. Cloudiness is high and frosts are common from October to May while the snow covers the Forest 7 with 8 months a year.

The scenery is impressive and besides the variety of morphological and vegetative features, it is also emphasized by huge cliffs and rapids. The environment is particularly important for the living of a vast variety of species from the animal and plant kingdom.

It is covered by dense forests of Black and White Peak and Beech and is a refuge for many species of birds, among which are some rare predators (vulture) and large mammals (bears, wild goats) that have disappeared from most areas of the Country. The whole area is perhaps the most important habitat of our country for the brown bear.

The Pindos Forest as a general finding of Greek and foreign specialists is unique in biological, ecological and research interest. It combines the aesthetic landscape of great value, the habitat with a great diversity of flora and fauna, diverse geomorphological composition, sensuality and uniqueness on national and European scale.

With a first survey, 30 species of trees and shrubs of particular interest were counted, 120 species of herbaceous vegetation with the appearance of the endemic species Centaurea vlachorum and 18 species of orchids.

The value of the Valia Calda area and the need for its protection have been recognized not only by the declaration of your National Park since 1966, but also on a pan European scale by its inclusion in the network of specially protected areas of the European Community (Article 4 of Directive 75/409). Still recently, the same area has been included in a special program funded by EΕC. to take urgent measures to protect and rationalize brown bear populations in Greece and Italy.